Sound the vuvuzela for year of the mystic mollusc 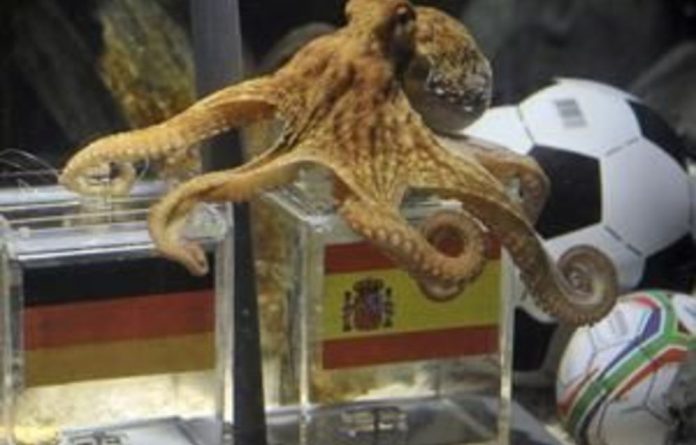 The astounding predictions of an octopus, the perils of “chexting” and the pain of getting around on planes were the laughing matters of 2010.

News that a Sicilian man had stolen sweets and chewing gum so he could spend New Year’s Eve in jail to avoid his relatives seemed odd until another Italian man was stabbed by his son after a quarrel over tactics for a soccer videogame.

An ash cloud from an Iceland volcano caused travel chaos around Europe and spawned jokes across the internet about the coincidence of the volcano’s eruption and the collapse of Icelandic banks owing billions to angry savers in Europe.

“The last wish of the Icelandic economy was to have its ashes scattered over Europe.”

Ash clouds and airport security woes failed to deter two women in Britain from trying to smuggle a dead relative wearing sunglasses on to a flight bound for Germany. But the agony of air travel sent others over the edge.

United States flight attendant Steven Slater became an overnight sensation for issuing a string of profanities, grabbing a few beers and leaping down the emergency chute of his plane at JFK airport to head home following an altercation with a passenger.

An internet “Don’t Touch My Junk” campaign encouraged US Thanksgiving travellers to refuse airport full body searches after a widely viewed YouTube video captured California man John Tyner telling a security official during a full body search: “If you touch my junk I’m going to have you arrested.”

Single and bitter?
The unfavourable economic climate also took its toll on the sex lives of American seniors with a poll showing people in their 50s were having less sex.

Lovelorn Chinese workers did not despair however. Their government set up a match-making website to help thousands of busy but lonely government workers find love at work.

“Are you still single and bitter?” asked the pink-themed website. Look no further.

A US study advised men seeking women to wear red. But British men risked a Valentine’s Day anticlimax by stocking up on anatomy-boosting underpants.

“The briefs mean that no man ever needs to feel inadequate again on the most passionate day of the social calendar,” said Rob Faucherand of UK shop Debenhams. “However we can’t be held responsible for what happens once the pants come off.”

Golfer Tiger Woods and US TV celebrity Jesse James, who was married to Oscar-winning actress Sandra Bullock, were the top celebrities who saw their lives unravel amid revelations of cheating on their spouses, in part by arranging liaisons via SMSes.

Other words also took the English language by storm.

The incessant buzzing vuvuzelas blown by fans at World Cup soccer matches in South Africa in the summer drowned out almost all other sounds, caused mayhem with referees and broadcasters, became an iPhone app, a sensation on YouTube and were finally banned by European soccer’s governing body UEFA.

Paul, the oracle octopus who shot to fame for his uncanny ability to predict the results of Germany’s World Cup campaign, enjoyed brief fame before dying in October after disappointing his hosts by correctly predicting they would lose their semifinal match to eventual World Cup champions Spain.

Spaniards asked for Paul’s transfer to Spain from his German home, while some annoyed Germany fans wanted to grill him.

World leaders also waded into the world of wackiness.

Italian Prime Minister Silvio Berlusconi drove past the Israeli-built wall in the West Bank, but failed notice it and caused offence when he said it was “better to like beautiful girls than to be gay”.

Venezuelan President Hugo Chávez told mothers they could cure insomnia in their children by making them watch his lengthy televised speeches and took up Twitter, urging Cuba’s Fidel Castro and Bolivian President Evo Morales to join in.

One reads: “In a nearby ditch