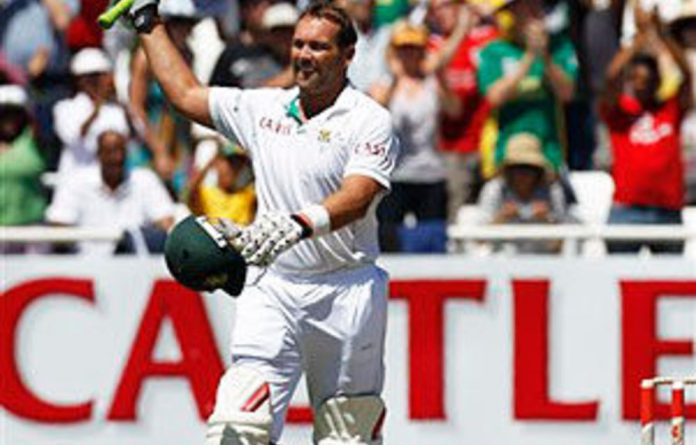 Jacques Kallis moved into joint second place on the all-time Test centurions list and held together a crumbling South African batting order on the second day of the third and final Test against India at Newlands on Monday.

South Africa were 335-9 at lunch, losing five wickets while 103 runs were added during an extended morning session.

Kallis was on 140 not out — his 39th Test century — moving him level with Ricky Ponting of Australia and behind only India’s Sachin Tendulkar, who has made 50 hundreds.

New-ball collapse
South Africa lost four wickets in the space of 25 balls against the second new ball, with three of them falling to fast bowler Shanthakumaran Sreesanth, who had figures of 5-99. It was Sreesanth’s third five-wicket Test haul.

Sreesanth struck in his first over of the day, after Kallis and Ashwell Prince had added 30 runs to the overnight total of 232-4.

Prince looked in particularly good form as he moved to 47 before being bowled by a ball from Sreesanth that cut back sharply.

Paul Harris helped Kallis add 27 for the ninth wicket and Kallis then gave a masterly exhibition of keeping the strike as he and Lonwabo Tsotsobe added an unbeaten 25 for the last wicket.

Kallis appeared to be struggling with a rib injury after mistiming a pull against Sreesanth when he had 102.

Sreesanth maintained his reputation for fiery exchanges with the batsmen and was spoken to by umpires Simon Taufel and Ian Gould after he appeared to make comments to Tsotsobe. — AFP