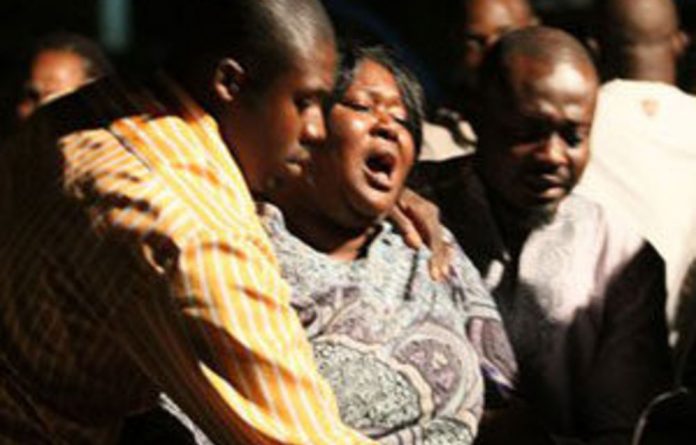 Multiple explosions rocked a central Nigerian city, another bomb killed at least four at an army barracks in the capital and a radical Muslim sect burned churches in the north-west.

The violence over the past two weeks highlights the tensions between Nigeria’s two major faiths — Christians and Muslims — and threatens peace ahead of the young democracy’s April presidential election.

Africa’s most populous country, home to 150-million people, has seen tens of thousands die in the violence between Christians and Muslims since it gained independence from Britain in 1960. While members of the two faiths intermarry and live peacefully in much of the country, political, economic and ethnic rivalries often fuel violence between the two faiths.

“There is anecdotal evidence that rival candidates are appealing for support on the basis of shared ethnic and religious identities that is likely to foment tension,” recently wrote John Campbell, a former United States ambassador to Nigeria who now is a fellow at the Council on Foreign Relations

The most recent attack, the bombing on Friday of an outdoor beer garden and market at a barracks in the nation’s capital of Abuja, could be the work of Muslim extremists, Nigeria’s President Goodluck Jonathan said on Saturday.

The main militant group in Nigeria’s oil-rich southern delta, the Movement for the Emancipation of the Niger Delta, issued a statement on Sunday denying its involvement in the bombings. The militant group previously orchestrated an October dual car bombing in the capital that left 12 dead and dozens more injured.

Two bombs
Jonathan on Sunday visited victims of the barracks bombing. In a statement, his office said the president praised first responders for “lessening casualties by speedily evacuating the market after the first explosion before a second blast occurred”. It was the first time authorities have said there were two bombs in the area of market stalls and beer parlors referred to locally as a “mammy market”.

Jonathan, a Christian who came to power after the May death of Nigeria’s Muslim elected leader, said Friday’s bomb had similarities to those used in the central Nigerian city of Jos. Three bombs exploded there on Christmas Eve, killing dozens. Authorities say about 80 died, including those killed in post-bombing reprisal violence. That region has seen more than 500 people die in religious and ethnic violence this year alone.

An internet posting attributed to a radical Muslim sect in the north known locally as Boko Haram claimed responsibility for the bombings. Boko Haram also attacked two churches in the northern city of Maiduguri on Christmas Eve as well, killing at least six people. Police blamed the sect for another church attack Saturday night that left a church destroyed in Maiduguri, though no one was injured.

However, Boko Haram likely has no political aspirations in the nation. Its statements routinely refer to the country as “some African lands known as Nigeria”. The group also remains devoted to the implementation of strict Islamic law rather than a political agenda.

Olusola Amore, a federal police spokesperson, said authorities have yet to make any arrests in the barracks bombing. He also said investigators have no suspects.

“We are still investigating,” Amore said.

Many in the country fear the violence may be politically motivated. President Jonathan faces a primary election in the ruling People’s Democratic Party this month against a Muslim northerner. After the death of elected leader Umaru Yar’Adua before the end of his first term, some in the party believe another northerner should lead the nation to satisfy an unwritten power-sharing agreement.

Jonathan’s administration, as well as the nation’s security agencies, have been unable to stop the attacks.

Panic mode?
“It is the intention of those behind the blast to get government and Nigerians to enter into panic mode and begin to react,” a message Sunday on Jonathan’s Facebook profile read. “If we do this they have won. So we have to take all necessary steps to bring them to book after swift but thorough investigations while we also allow for no disruption in our plans for a prosperous new year.”

However, Jonathan’s profile had a message on Christmas Eve reading: “While there was tension in some parts of the north last Christmas, this Christmas those tensions have eased.”

Only a few hours later, that claim would be proven wrong.

“Since then, the senseless violence has erupted … and the entire country lies in the grip of a general air of insecurity,” an editorial on Sunday in Lagos’ NEXT newspaper warned. – Sapa-AP