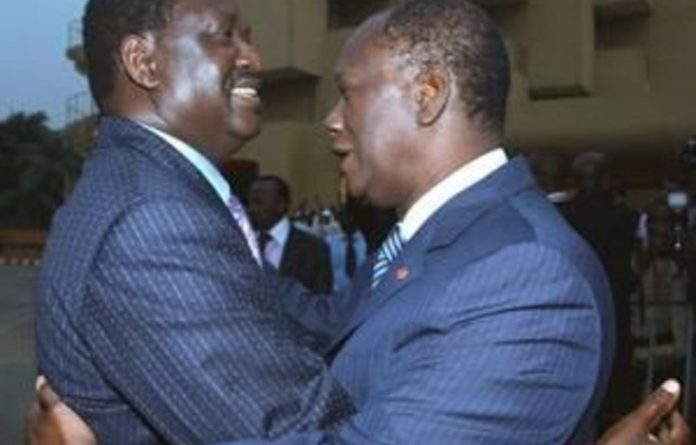 Côte d’Ivoire strongman Laurent Gbagbo has agreed to negotiate a resolution to the crisis gripping the West African nation and lift a blockade around his rival’s headquarters, mediators said on Tuesday.

A day after meeting both Gbagbo and Alassane Ouattara, the man widely seen as having won an election in November, a group of African leaders said that the incumbent had promised that the dispute would be settled peacefully.

“Mr Laurent Gbagbo agreed to negotiate a peaceful end to the crisis without any preconditions,” said a statement by the joint African Union and Ecowas (Economic Community of West African States) team of mediators a day after meeting the Côte d’Ivoire political rivals.

“He [Gbagbo] also pledged to immediately lift the blockade around Hotel du Golf, the temporary HQ of Mr Alassane Ouattara, the president-elect,” it said.

Dramatic break
The statement marked a dramatic break after Nigeria’s president, who is also head of a regional bloc, said the crisis was deadlocked, while the current head of the African Union also voiced dismay over the pace of negotiations.

“There is still a stalemate,” Goodluck Jonathan told reporters after talks with the envoys. “Don’t expect that if there is a major crisis in a country, you just jump in in one week and that matter is resolved. It takes a lot of international pressure to convince people like that,” said Jonathan.

The comments by Jonathan, who is head of Ecowas, came after he was briefed by three West African presidents and Kenyan Prime Minister Raila Odinga, who spent Monday shuttling between the two would-be presidents of the world’s number one cocoa producer.

Odinga said that Gbagbo and Ouattara had agreed to meet, but this was categorically denied by the camp of internationally recognised election winner Ouattara, whose camp is besieged by Gbagbo’s troops in an Abidjan hotel.

Malawian President Bingu wa Mutharika, who is the current chairperson of the African Union, had also doused hopes of a breakthrough by voicing disappointment at the “slow pace” of mediation efforts.

“The president is disappointed that there is a slow pace in the Ivorian mediation process … that up to now there is no breakthrough in the negotiations,” his spokesperson, Hetherwick Ntaba, told state radio.

Ecowas agreed at its last summit that Gbagbo must cede power to Ouattara or face military intervention by the regional bloc.

A follow-up meeting to fine-tune the “last-resort” plan is scheduled for Mali on January 17 and 18.

Ouattara on Monday appeared to rule out further talks despite the mediation, saying: “For us, the discussions are over.”

Clock ticking
With the clock ticking, a senior US State Department official said that Gbagbo, who has relatives in Atlanta, Georgia, could seek refuge there but that the offer would not last long.

“We want to see him leave. If he wishes to come here, we of course would entertain that as a means of resolving the current situation,” the official said, requesting anonymity.

Côte d’Ivoire’s Independent Electoral Commission as well as the UN declared Ouattara the winner of the November 29 run-off poll, while the Constitutional Council said that Gbagbo won.

Both men have been sworn in as president and Gbagbo claims there is an international plot to depose him after more than a decade in power.

Gbagbo, who retains control of the army, rejected the Ecowas attempt last week to persuade him to step down and end the crisis that has sparked international condemnation and fears of a civil war.

The UN says that at least 179 people have been killed in post-election violence but that it has been unable to fully investigate because of attacks on its personnel, while UN rapporteurs said they feared the violations being committed amounted to “crimes against humanity”. — AFP