Kallis ‘one of the greatest ever’ 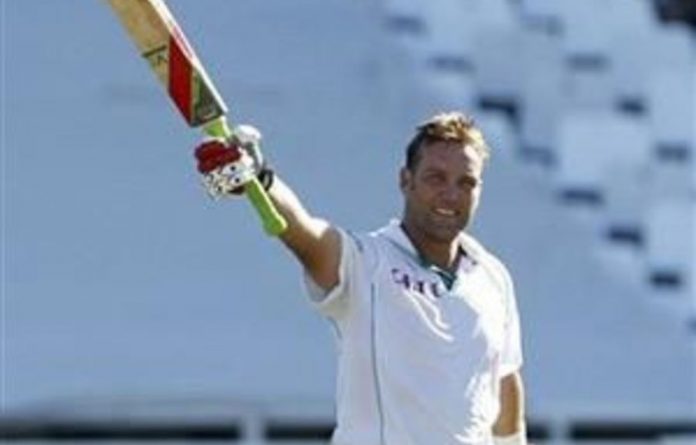 Jacques Kallis was hailed as a cricketing great by teammate Mark Boucher and opponent Harbhajan Singh after he batted through pain to hit his second century of the match and put South Africa on top on the fourth day of the series-deciding third and final Test against India at Newlands on Wednesday.

Kallis made 109 not out as South Africa recovered from a precarious 130-6 to be all out for 341 off the last ball of the day — leaving India with the near impossible task of scoring 340 to win on a wearing pitch on which uneven bounce could make batting difficult on the final day.

“We have one of the greatest cricketers who ever lived, in our own country,” said Boucher, whose seventh-wicket stand of 103 with Kallis turned the match in South Africa’s favour.

“He’s a top-class player. I have not seen many people handle a situation the way he did today. He got runs on a difficult wicket. I rate him very highly. He has taken on the responsibility and he has the technique … I rate Jacques Kallis as the best player in the world after [Sachin] Tendulkar.”

Kallis suffered a bruised rib and strained muscles in his right side when he was injured while batting during his first innings of 161. He did not field during India’s innings and Boucher said he had been given “four or five” injections.

In pain
“I don’t think anyone understands the pain he is in at the moment,” said Boucher. “I have just spoken to the doctor and he says it is like someone breaking your rib. It just goes to show the character of the guy.”

It was the second time Kallis had scored twin hundreds in a Test match, a feat achieved six times by South Africans, although not previously on home soil.

The innings took Kallis into second place on the all-time list of Test centurions. It was his 40th hundred, one more than Ricky Ponting of Australia and 11 fewer than India’s Tendulkar.

Kallis and fellow veteran Boucher (55) came together in what Boucher described as a pressure situation.

“That’s the reason why we play the game,” he said. “It feels so good when you handle the pressure and come out on top.”

Boucher said South Africa were confident they could clinch the series on the final day.

“After the heatwave we have had for the past two days and a bit of wind, the pitch is pretty dry. The bounce is definitely getting more variable.

“We have two guys who can bowl at 145km/h and that can be pretty nasty to face. We’re comfortable that there are enough overs left in the game to win it if we bowl well.”

After the Kallis-Boucher stand, Dale Steyn hit a breezy 32 as he and Kallis added 54 for the eighth wicket against a tiring Indian bowling attack on a blisteringly hot day.

Misery compounded
India’s misery was compounded when Morne Morkel hit 28 in a ninth-wicket stand of 46, with Kallis happy to let the tail-ender keep the strike, before last man Lonwabo Tsotsobe hit the first two balls he faced for four and was caught on the boundary off the next delivery.

Off-spinner Harbhajan had threatened to run through the South African batsmen when he took two wickets in his first two overs of the day to add to the two he took shortly before the close on the third day.

At that stage he had taken 4-10 in five overs but he had to wait another 28 overs to complete his 25th five-wicket haul when he dismissed Steyn.

“We got two wickets up front and thought we would have to chase 200,” said Harbhajan. “But they batted well. We didn’t bowl as well as should have. We could have created more chances with our seamers.”

Kallis needed treatment shortly before lunch and again during the afternoon but played a chanceless innings. He batted for 380 minutes, faced 240 balls and hit eight fours. — AFP