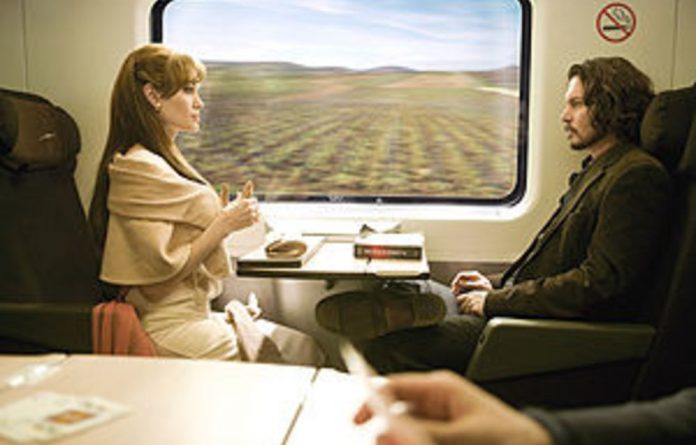 It comes about 50 minutes into the movie: the moment at which The Tourist begins to fall apart.

That is to say, something happens that is entirely unexplained, but the plot whooshes on regardless, using the unexplained incident to generate a thrilling chase sequence that probably hopes to distract the viewer from the point at which we should be entitled to stop and say: “Hang on, how did that happen?”

You could say it is there that The Tourist loses the plot and losing the plot in a very plotty movie is not a good thing. This is a movie that makes much of its plot, that in fact relies upon it as the most powerful motor of storytelling excitement.

The same goes for what you could call the plot within the plot, meaning the way the characters scheme against one another, vying for knowledge and power — how they keep secrets from one another, how they manoeuvre behind one another’s backs or, indeed, in face-to-face confrontations.

The movie practically strangles itself with such over-plotting and the viewer is meant to derive much thrill and some satisfaction from this. It’s that kind of movie.

And plot, well handled, can certainly provide such thrills — this is the template of the thriller. But, to be ultimately satisfying, the plot has to work out, to resolve: it has to come to some kind of algebraic solution, leaving no terms unexplained and leaving the viewer feeling that all the mysteries conjured up have been clarified into comprehensibility. Again, here The Tourist fails.

It is, at least, notable for being the first on-screen pairing of Angelina Jolie and Johnny Depp, two powerful and indeed somewhat mysterious stars. In that respect it’s good casting: the oddly regal and slightly alien goddess versus the somewhat ragged charm of the sexy bohemian bumbler. Whether the film makes good on such potential is another matter.

Jolie is introduced as a woman under surveillance because she has been in cahoots with a man who stole a billion or two from a vicious crime lord. Her thieving lover has since disappeared and the intelligence agencies represented by Paul Bettany are trailing her in the hope of locating the vanished thief. She leads them on a merry dance, getting on a train and seductively pulling the innocent American tourist of the title (Depp) into these machinations.

In this respect he’s rather like the figure of Roger O Thornhill in Hitchcock’s North by Northwest (and the scenes of their encounter on the train are surely an echo of the important train meetings in that 1959 movie). He is a baffled interloper dragged into a mysterious situation that is steadily becoming life-threatening. He, no less than the viewer, has to solve the mystery posed by the Jolie character.

From that point onwards, the film develops plot complications that ramify in all directions — as mentioned, some of those complications are a ramification too far. By the time that first truly inexplicable moment arrives, 50 minutes into the movie, the viewer may in fact be so muddled about what’s going on that it barely matters.

The Tourist is made with that high-Hollywood glossy style that, in fact, makes of the movie itself a kind of tourist, one gawping at glamorous cities (Eiffel Tower equals Paris and so on) and staying in expensive hotels.

Jolie swans about in outfits that would surely be regarded as hopelessly overdressed in any context other than a big-budget movie; early in the film she’s catching that train, but she’s dressed like someone about to attend an exclusive soirée or, at the very least, a presidential dinner.

And, of course, she may be heading for a station platform but she walks like she’s on the ramp at Paris Fashion Week. Her hips sway so widely that, watching her, you almost get seasick.

Depp, meanwhile, is doing ordinary guy for all he’s worth. That doesn’t mean he’s chopped off his girly locks or shaved off his boho goatee; he’s just had a little trim to make him less of a swashbuckling pirate and more of a provincial maths teacher.

Well, there’s also the need to frame his face in a way that tries to conceal the fading of those Don Juan cheekbones he used to have. He’s certainly carrying more weight all over, not just on the face – but that’s just fat, not gravitas.

Overall, The Tourist has about as much gravitas as a helium balloon. Nothing here has any weight at all — except Depp.

It’s fairly entertaining if you accept its basic status as costly, overblown piffle, replete with plot twists that make a nonsense of what has gone before. If you were hoping for, at the least, an explosive sex scene between these two icons of sexual lust, you will be disappointed.

The chemistry between the leads is hardly bubbling: it feels distinctly contrived, like the actions of two pole dancers trying to give a jaded constituency one more mini-frisson.

In fact, The Tourist may not really be about plot and counterplot at all, or about any sudden flare of desire between Jolie and Depp; it’s mostly just about some really expensive hotels, a bit of Euro-bling, Jolie’s wardrobe, Depp’s hair and a mildly interesting train ride. Choo-choo!