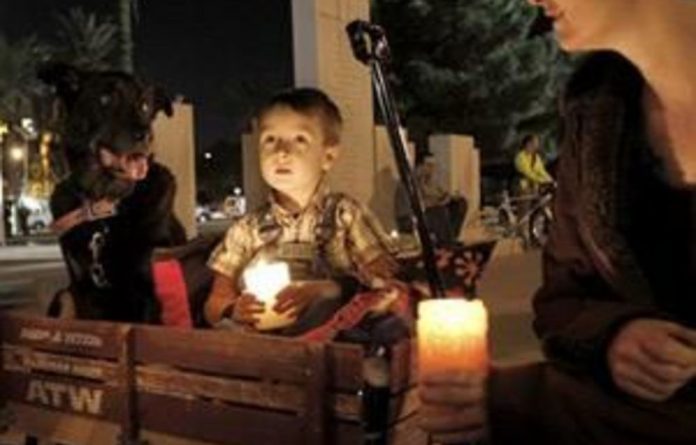 Even before the shooting of a US congresswoman on Saturday, the state of Arizona was in the throes of a convulsive political year that had come to symbolize a bitter partisan divide across much of America.

The motives of the alleged shooter, who wounded Democratic Congresswoman Gabrielle Giffords and killed six people in Tucson, are not known and they may not be political.

But after an acrimonious election in November that followed months of bitter exchanges, politics looms large in the wake of the shooting and a local sheriff pointedly blamed hateful political rhetoric for inciting violence.

“When you look at unbalanced people, how they respond to the vitriol that comes out of certain mouths about tearing down the government,” Pima County Sheriff Clarence Dupnik told a news conference.

“The anger, the hatred, the bigotry that goes on in this country is getting to be outrageous. And, unfortunately, Arizona I think has become sort of the capital. We have become the Mecca for prejudice and bigotry.”

The spark in Arizona’s political firestorm was the border state’s move to crack down on illegal immigration last summer, a bill proposed by conservative lawmakers and signed by Republican governor Jan Brewer.

The law known as SB 1070 “superheated the political divide more than I’ve ever seen it in Arizona”, said Bruce Merrill, a longtime political analyst and pollster at Arizona State University.

A majority of Arizonans supported it, but opponents and many in the large Hispanic population felt it was unconstitutional and would lead to discrimination.

As the law went into effect, US Congressman Raul Grijalva, an Arizona Democrat and opponent of SB 1070, closed a district office in Yuma after staff found a shattered window and a bullet inside.

Giffords favoured a softer approach to illegal immigrants and was expected to push for comprehensive immigration reform in the Congress that was sworn in this week in Washington.

There was also anger over the economic crisis. The once-booming desert state was one of the places hardest hit by America’s mortgage meltdown and foreclosure crisis.

Add to that rage over policies by Democratic President Barack Obama, namely his healthcare reform passed last year, and the rising national debt — both issues that rallied conservatives in the last elections, especially those tied to the Tea Party movement.

“I feel huge sorrow, that’s just been building in southern Arizona for some time, this hate, hate, fear, somewhat around SB 1070, somewhat around healthcare reform. It definitely heated up when President Obama was elected,” said Molly McKasson Morgan (63) who participated in Tucson politics and knew Giffords.

Giffords narrowly won her reelection in November over a candidate backed by the Tea Party.

And then there are the guns, readily available in a state with relaxed gun control laws.

“The number of guns and the angry people that have access to them is astonishing,” Gutierrez added. “That combination of anger and guns in Arizona is almost an invitation to violence.”

Art Hamilton, who served 26 years in the state House and 18 years as its Democratic leader, said there is “no question” that Arizona is at a low point in its governance.

“I do believe we see a point in the history of this state that we’re practicing the politics of division and subtraction, not multiplication and addition,” Hamilton said. – Reuters

The Ugu district municipality has increased its water and sanitation tariffs by 8%, but it does not supply residents with water
Read more
National

Aviwe Wellem’s violent death shook a village in the Eastern Cape, but the DNA results are still not back and no one has been arrested.
Read more
Advertising
Continue to the category
Politics