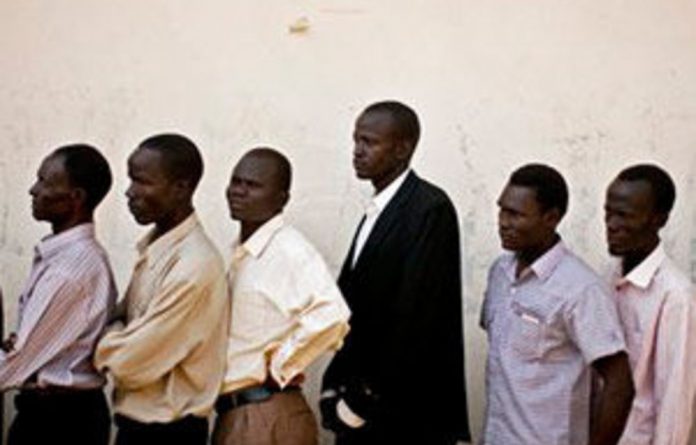 Voters standing in a second day of long lines in Southern Sudan’s capital sat patiently and rested against concrete walls for hours to cast ballots in an independence referendum likely to lead to the world’s newest country.

Voting in the weeklong referendum began Sunday with jubilant celebrations, and most everyone agrees the vote will result in the south splitting off from the Khartoum-based north. The two sides ended a 23-year civil war in 2005 that killed two million people. The peace deal called for this week’s vote.

Mahmud Abubakar waited in line to vote twice. On Sunday, he said, he got in line at 8am but abandoned the queue at 1pm still far from the ballot box. On Monday he got in line at 7am and cast his ballot four hours later in between ancient-looking lab tables at Juba University. He said he didn’t mind waiting.

“We have suffered long enough. We want separation,” Abubaker (31) said.

Juma Salah, the head of the electoral workers at the university, said lines were much shorter on Monday despite the four-hour wait. Still, two queues snaked around the chemistry building.

‘No unity’.
Southerners, who mainly define themselves as African, have long resented their underdevelopment, accusing the northern Arab-dominated government of taking their oil revenues without investing in the south.

Almost everyone — including Sudan’s President Omar al-Bashir, who has been indicted for war crimes in the western Sudan region of Darfur — agrees that the mainly Christian south will secede from the mainly Muslim north.

Southern Sudan is among the world’s poorest regions. The entire France-sized region has only 50km of paved roads. Because only 15% of southern Sudan’s 8,7-million people can read, the ballot choices were as simple as could be: a drawing of a single hand marked “separation” and another of clasped hands marked “unity”.

Independence won’t be finalised until July, and many issues are yet to be worked out. They include north-south oil rights, water rights to the White Nile, border demarcation and the status of the contested region of Abyei, a north-south border region where the biggest threat of a return to conflict exists.

Bound together
Most of Sudan’s oil is in the south, while the pipelines to the sea run through the north, tying the two regions together economically.

Fighting has flared in recent days in Abyei, which had been scheduled to hold a separate self-determination vote this week but now its future will be subject to north-south negotiations. Nomadic Arab tribes and southern blacks both have claims on Abyei, a region whose oil makes it extra valuable to both the south and north.

Sudan, geographically the largest country on the continent, will lose a third of its land, nearly a quarter of its population and much of its oil if the south secedes. Khartoum’s only consolation will be that the pipelines to get the product to market all run through its territory.

About 3,9-million people registered to vote. A simple majority must vote for separation for the referendum to pass, but 60 percent of registered voters must cast ballots for the vote to be valid. Results will trickle in after polls close Saturday, but results won’t be finalized until February.

Exiting a polling station on Monday was Sawa Haaj, a 26-year-old who spent part of her childhood as a refugee in Khartoum and Cairo, where she said she suffered from racism and discrimination because of her black skin. Her father is Muslim but her mother is Christian.

“I voted for separation because I was tired of staying with Arabs,” Haaj said. – Sapa-AP

Battle for Abyei could ignite new war in Sudan