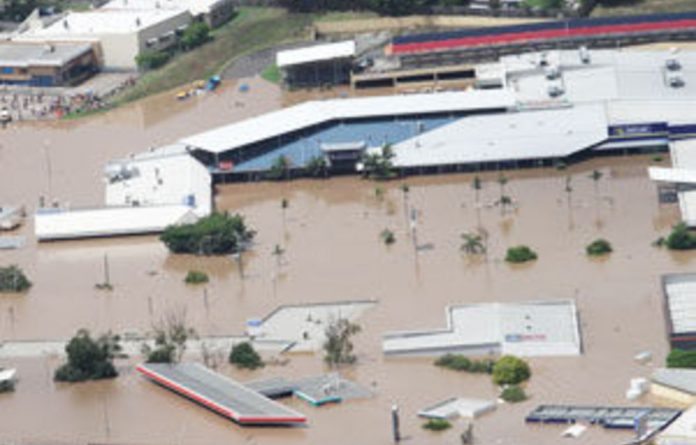 Australia’s third-biggest city, Brisbane, was besieged on Wednesday by once-in-a-century floods that could hit more than 30 000 homes, as the death toll in raging torrents rose to 12.

Thousands of people fled to higher ground and Brisbane’s centre was a “ghost town” as the river city of two million battened down for its worst deluge in decades, as deadly floods inundate vast areas of Australia’s north-east.

Power was cut to tens of thousands of premises and some residents headed to evacuation centres as boats and floating restaurants broke their moorings and careered down the swollen Brisbane River, smashing into bridges.

More than 50 suburbs and 2 100 roads are expected to be left under water as the Brisbane River bursts its banks and swamps the city centre, along with other areas.

But while the river was continuing to rise, it was no longer expected to peak at 5,5m, but top out at 5,2m at about dawn on Thursday — lower than the level reached in the last major floods in 1974.

Damage is already intense, with witnesses spotting entire houses in the river. The military pondered scuttling a landmark ferry and a well-known restaurant that were in danger of floating away.

City authorities said about 20 000 homes will be completely flooded, with another 12 000 partially affected.

‘Make sure they’re okay’
Prime Minister Julia Gillard called the disaster’s scale “mind-boggling”, but urged people to help their neighbours during the city’s worst emergency since the 1974 floods.

“If there’s someone in your street you’re worried about, maybe an older Australian that you haven’t seen for a while, maybe give them a knock on the door and make sure they’re okay,” Gillard said.

Brisbane, the cosmopolitan state capital and economic hub, is the latest and biggest victim of floods caused by months of rains that have turned three-quarters of Queensland into a disaster zone twice the size of Texas.

Garbage collections and bus services were cancelled, traffic lights were out of action and Brisbane’s port was open only for emergency supplies. Sewage from flooded homes spilled into the gathering torrents.

Isolated ATM cash machines were running out of money and residents were told to conserve drinking water in case supplies are cut. Bligh urged people to find refuge and stay there until the danger passed.

“This is a deeply serious natural disaster. Stay in your homes, don’t travel unless it’s absolutely necessary,” she said.

Elsewhere 1 100 people jammed evacuation centres in nearby Ipswich, upstream of Brisbane, where 3 000 homes were deluged. Rural Condamine was evacuated for the second time, along with two towns in neighbouring state New South Wales.

Flash floods
Some of the inundation was related to flash floods that smashed through towns high in the Great Dividing Range to the city’s west on Monday, leaving at least 12 dead as rescuers combing wrecked communities found two more bodies.

Officials said the toll was expected to keep rising with grave fears for nine people among 51 listed as missing. The state coroner headed to the stricken Lockyer Valley region, along with grief counsellors.

“This is about bodies caught up in trees, bodies in creeks that we are searching,” said disaster coordinator Ian Stewart.

However, two people who were swept away, presumed dead, later turned up alive, in what police commissioner Bob Atkinson called “a small piece of wonderful news”.

“I can only describe it as a miracle,” he said. Newspapers also hailed the remarkable birth of a baby boy in a flood-bound home as the waters surged.

Twenty-three people have died in floodwaters in recent weeks, many trying to negotiate fast-running currents. In one tragic incident, a 17-year-old girl drowned when her foot got stuck between rocks as waters rose.

The flood disaster has provoked concern from around the world, with Indonesia saying it would donate $1-million to help victims. — AFP