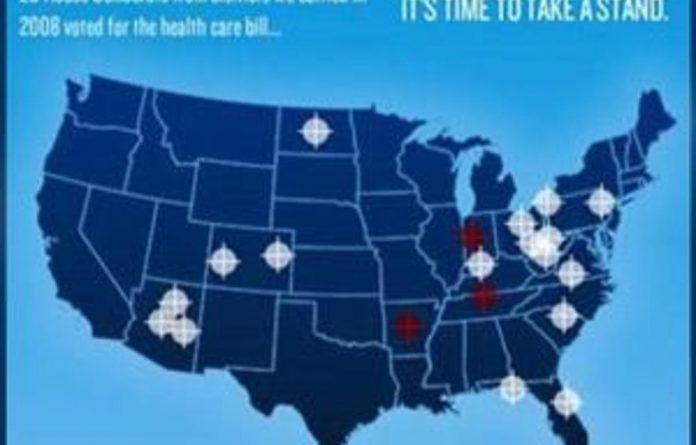 Sarah Palin on Wednesday slammed as “blood libel” the charges that overheated political rhetoric contributed to a weekend shooting rampage in Arizona that left a United States lawmaker fighting for her life.

“Especially within hours of a tragedy unfolding, journalists and pundits should not manufacture a blood libel that serves only to incite the very hatred and violence that they purport to condemn,” she said in an online video message.

The conservative former Republican vice-presidential candidate made her remarks after Saturday’s shooting in the south-western state by a lone gunman who killed six people and wounded 14 others in the assassination attempt on congresswoman Gabrielle Giffords, who was shot through the head.

Palin rejected liberal claims that conservative figures like herself have whipped up a frenzied climate of hate that could push the deranged or hate-filled over the edge into acts of violence.

“It is time to restore the American precept that each individual is accountable for his actions,” said Palin, who is widely viewed as a possible 2012 presidential contender.

“Acts of monstrous criminality stand on their own, they begin and end with the criminals who commit them — not collectively with all the citizens of a state, not with those who listen to talk radio, not with maps of swing districts used by both sides of the aisle, not with law-abiding citizens who respectfully exercise their first amendment rights at campaign rallies.”

The former Alaska governor, who has become a fixture on the US media landscape since leaving public office, has been at the centre of the recent media firestorm about the impact of inflammatory political language.

She has been most criticised over a tweet she sent during last year’s healthcare debate urging ardent opponent of the legislation, “Don’t Retreat, Instead – RELOAD!”

She was also condemned for setting up a website called “Take Back the 20”, which included a map of the United States with cross-hairs on congressional districts of Democratic candidates she had singled out for defeat.

One of those seats belongs to Giffords, a Democrat who squeaked out a narrow victory over her Republican challenger.

Gifford was among those who criticised Palin at the time.

“The way she has it depicted has the cross-hairs of a gun sight over our district,” Giffords told MSNBC television last year. “When people do that, they’ve got to realise there’s consequences to that action.” — AFP