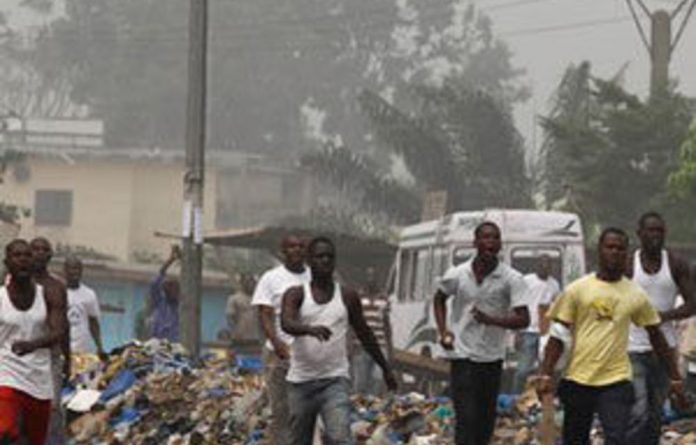 At least two people died as Côte d’Ivoire forces loyal to Laurent Gbagbo on Tuesday moved into an Abidjan bastion of his rival for the presidency, dashing hopes for a peaceful end to the crisis.

Two men in civilian clothes were shot dead on the streets of the Abobo neighbourhood, mostly loyal to the man the world says won November’s presidential election, Alassane Ouattara, after Gbagbo’s troops moved in.

The United Nations says that over 200 people have died in the crisis so far, with African-led efforts to mediate the stand-off failing to produce any visible result as the army loyal to Gbagbo besieges Ouattara’s headquarters.

The African Union’s mediator is to return to Abidjan within days, while regional bloc Ecowas has said it is prepared to send in its own troops if defiant strongman Gbagbo fails to stand down.

Hundreds of members of incumbent Gbagbo’s Defence and Security Forces (FDS) as well as armoured personnel carriers were deployed in the tense Abidjan district, where two FDS were reportedly also killed.

It was not possible to verify the FDS deaths, although residents told Agence France-Presse that blood stains on the ground in front of a church around 200m from the dead civilians were from the dead security forces.

A crowd of angry youths erected barricades across one of the district’s main streets, forcing a patrol from the United Nations peacekeeping mission in the country, UNOCI, to turn back.

Gbagbo’s “Street General” Charles Ble Goude, head of the hardline Young Patriots, postponed a political rally he had been due to hold in the neighbourhood on Tuesday afternoon.

“We have postponed our rally to allow the military operation under way to be satisfactorily completed,” said Ble Goude.

Exchanges of fire
One of his aides said the rally was called off also “out of respect for the victims of the clashes”.

An FDS member as well as local youths told AFP that there had been exchanges of fire between the FDS and inhabitants.

Residents said that security forces had entered the district early on Tuesday and raided homes saying they were searching for weapons.

The violence came as the head of Gbagbo’s party, the Ivorian Popular Front (FPI), rejected an offer from Ouattara’s UN ambassador for his supporters to form a unity government.

“The starting point is that Mr Gbagbo is the elected and officially proclaimed president, sworn in by the Constitutional Council,” N’Guessan said, accusing Ouattara of diversionary tactics.

“What is non-negotiable is the victory of Laurent Gbagbo, officially elected and proclaimed, who governs the country.

“Once this is recognised… we are ready to look at all means that could allow the return of peace and the country’s reunification,” he said.

AU envoy and Kenyan Prime Minister Raila Odinga is to fly to Abidjan within days, his spokesperson said, the latest in a cascade of African leaders seeking an end to the deadly stand-off.

“The PM has indicated that he will return to Ivory Coast this week. The date of his return will be either Thursday or Friday,” Dennis Onyango told AFP.

The Economic Community of West African States (Ecowas) bloc has said it could send in troops if talks fail.

Gbagbo and his supporters are becoming increasingly isolated as international powers ramp up pressure on the strongman to step aside.

Ouattara is protected at the besieged Golf Hotel in Abidjan by around 800 UN peacekeepers as well as the ex-rebel New Forces allied with his camp since troops shot dead several of his supporters on December 16.

Former Nigerian president Olusegun Obasanjo was the latest regional figure to attempt to mediate an end to the crisis. He left Ivory Coast on Monday after two days trying to find a way through the deadlock. – AFP

Faced with jihadist breakthrough in Burkina Faso, neighbouring states in the Gulf of Guinea increasingly fear attacks in their own territories
Read more
Advertising
Continue to the category
Politics