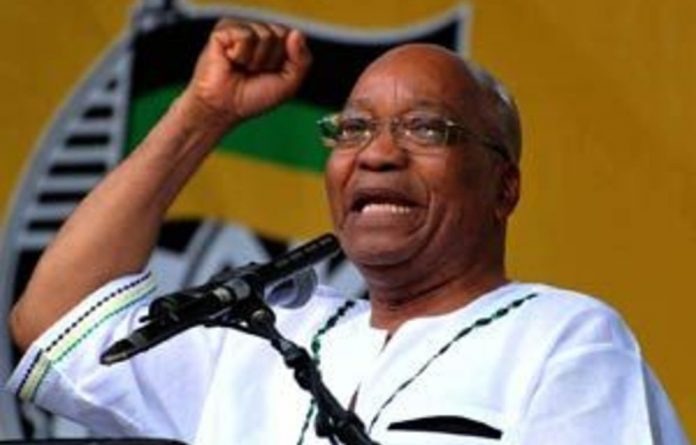 Identifying practical steps to create jobs is the main focus of a meeting of the African National Congress’s top brass under way in Midrand on Thursday.

“This lekgotla must come up with ways and means of how we crack the question of job creation,” ANC spokesperson Jackson Mthembu told journalists at Gallagher Estate.

Almost one million jobs were lost in 2010.

President Jacob Zuma made it clear to ANC and government leaders that job creation would be the mantra for 2011 as the meeting kicked off and was adamant that practical methods and not “theorising” and “wishy-washy” means were necessary.

“The president has instructed us … we must not go into commissions and theorise, we want concrete … plans,” Mthembu said.

Zuma sat at the top table wearing a grey suit, flanked by his deputy Kgalema Motlanthe and ANC treasurer general Mathews Phosa to one side and chairperson Baleka Mbete, secretary general Gwede Mantashe and his deputy, Thandi Modise on the other.

Mthembu conceded that despite making strides in other priority areas such as health, the ANC-led government had not done enough about employment.

The problem was exacerbated by the international economic climate.

“Where indeed we are lacking … is in relation to the creation of jobs.”

The new growth path presented by Economic Development Minister Ebrahim Patel in October last year provided a framework for plans to boost job creation — it would “anchor” the job creation strategies developed. The party’s NEC adopted the plan, which was presented at the three-day lekgotla.

However, ANC ally, the Congress of South African Trade Unions (Cosatu), criticised the growth path, saying it needed to be reworked.

‘Place to start’
Mthembu said the ANC was aware the plan was not perfect, but it needed a place to “start”.

“We need to start somewhere but this is a good start. This is a framework that all of us should work on.”

He added that the ANC welcomed input from Cosatu or any other sector, stressing that government could not achieve its targets on employment on its own, a “social pact” was needed with labour and business.

“At the end of the day all of us should put our heads together and say can we use this [the new growth path] as a framework.”

Rural development — and creating work for those in rural areas — was another area the party would focus on, with a presentation expected from Minister of Rural Development and Land Reform Gugile Nkwinti later on Thursday.

Finance Minister Pravin Gordhan was also expected to present on how the budget could be used to create decent work, Mthembu said.

A separate commission would delve into preparations for the upcoming local government elections.

Economic crisis
On Sunday, Zuma said there had not been much progress in government’s job creation project due to the economic crisis that hit the world

“As you may know, this is one of the five priorities … In the other four we have made progress, but this one still needs to be tackled, ” he said.

Speaking a day after addressing the 99th ANC anniversary celebration in Polokwane, Limpopo, Zuma said the issue of job creation was going to be a central issue at the upcoming ANC congress, as well as how resources would be allocated to see to it.

He said although there was an economic growth in the country two years ago, this was not enough for the job creation priority.

However, Zuma said government had clear plans on what it needed to do and that the document of the new growth path detailed what it planned on doing.

He said the document was made public for people to record their views and tell government what to do better in its plans.

The new growth path framework document sets a very ambitious target — the creation of five-million jobs in 10 years. To do this it proposes a host of measures, both macro and micro-economic, that will require a broad social compact between labour, business and the government, if they are to work.

Zuma warned that these views needed to be expressed quickly as the plan needed to be implemented urgently. — Sapa