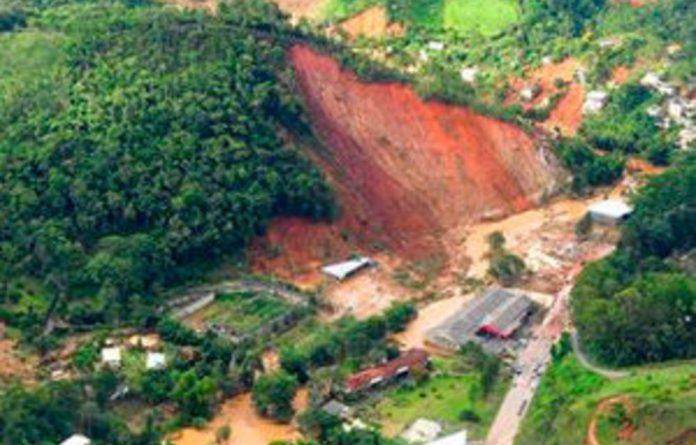 In the hardest-hit town of Teresopolis, where the local civil defence agency said at least 146 people died, hundreds of family members crowded around the town’s morgue waiting to identify bodies. More corpses were laid out on a street in front to the police station, covered by blankets. Rains hit the town overnight, though no new mudslides were reported.

Rescuers used heavy machinery, shovels and bare hands in attempts to find survivors. How many were saved was not known — at least 50 were still missing and one neighbourhood hit by slides in Teresopolis had not been reached yet by authorities. In a neighbouring town, firefighters rescued a 25-year-old man who held his six-month-old son for 15 hours until they were both pulled out alive. The man’s wife and mother-in-law were feared dead.

Heavy rains and mudslides kill hundreds of people across Brazil each year, especially during the South American summer. The worst hit are the poor, whose rickety homes are often built on steep slopes with weak or no foundations.

In Teresopolis, 65km north of Rio de Janeiro, deluges filled creeks and the overflows swept over already water-logged mountainsides. Brick and wooden shacks built on hillsides stripped of trees washed away in surging earth and water, leaving behind only a long trail of mud.

More rain forecast
The mountains saw 26cm of rain fall in less than 24 hours. More rain, possibly heavy at times, is forecast through the weekend.

Floodwaters continued to gush down the mountains for hours after rainstorms ended on Wednesday. Survivors waded through waist-high water, carrying what belongings they could, trying to reach higher ground. Many tried desperately to find relatives, though phone service was out in the region and many people were still missing hours after the rain stopped.

“There are so many disappeared — and so many that will probably never be found,” said Angela Marina de Carvalho Silva, a resident of Teresopolis who feared she may have lost 15 relatives, including five nieces and nephews.

“There was nothing we could do. It was hell,” she said in a telephone interview.

Carvalho Silva took refuge in a neighbour’s house on high ground with her husband and daughter, and watched the torrential rain carry away cars, tree branches and animals and rip apart the homes of friends and family.

“It’s over. There’s nothing. The water came down and swept everything away,” said her husband, Sidney Silva.

In the neighbouring mountain town of Nova Friburgo, at least 107 people died, according to an emailed statement from the Rio state civil defence department. Among the dead were four firefighters who were helping in the rescue effort. Three other firefighters were listed as missing after their fire truck was hit by a mudslide.

300 dead
With the new disasters, more than 300 people have died since Christmas across the south-eastern portion Brazil.

President Dilma Rousseff signed a measure mp Wednesday sending $461-million to towns in Rio and São Paulo states that were damaged during the recent rains. The money will go to repairing infrastructure and preventing future disasters.

The president planned to fly over the most severely damaged areas on Thursday.

The mayor of Teresopolis, Jorge Mario Sedlacek, decreed a state of emergency, calling the calamity “the worst to hit the town”. About 800 search-and-rescue workers from the state’s civil defence department and firefighters dug for survivors.

The death toll in the region was expected to rise as firefighters reached remote valleys and steep mountainsides where neighbourhoods were destroyed, Teresopolis’s mayor said. About 1 000 people there were left homeless and took shelter in a local school.

“This is the largest catastrophe in the history of this town,” Sedlacek said in an interview with Globo TV.

Heavy rainfall also caused havoc earlier in Minas Gerais state north of Rio, where 16 people died in the past month and dozens of communities are in a state of emergency.

In São Paulo, flooding paralysed main thoroughfares in the capital city since Sunday and 21 people died in collapsed homes, mudslides and flooding throughout the state.

“We mourn the loss of lives in this tragedy caused by the rain,” Cabral said in a statement. – Sapa-AP