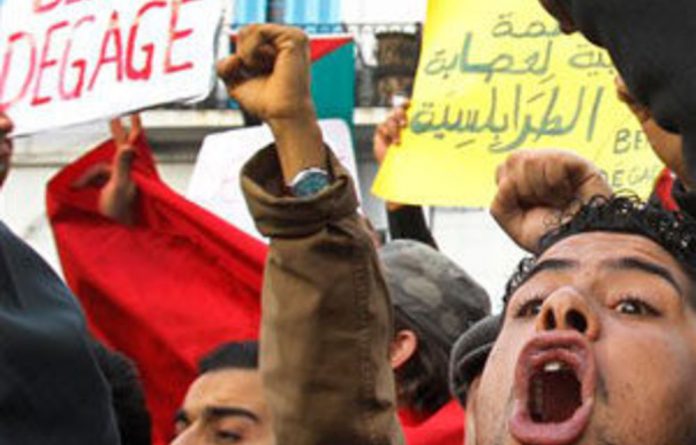 Gunshots rang out and police fired tear gas to disperse protesters demanding the resignation of Tunisian President Zine al-Abidine Ben Ali on Friday after the worst unrest of his two decades in power.

About 8 000 people were demonstrating outside the interior ministry in Tunis chanting “Ben Ali, leave!” and “Ben Ali, assassin!” a Reuters reporter said.

Crowds of youths who retreated a little way from the building started throwing stones at the police, who responded by firing more tear gas grenades.

The rally came hours after the 74-year-old president announced in a television address that he would not seek a sixth term as expected in 2014, following a month of violent protests against unemployment, political repression and corruption.

In power since 1987, Ben Ali made sweeping concessions on Thursday evening, saying security forces would no longer use live ammunition against protesters and promising freedom of the press and an end to internet censorship. He also said the prices of sugar, milk and bread would be cut.

For the Tunis protesters, it was not enough. “We don’t want bread or anything else, we just want him to leave,” they chanted. “After that we will eat whatever we have to.”

“There are thousands of us here, we have come out in our thousands to say: ‘Ben Ali, go away!’,” trade union activist Sliman Rouissi told Reuters by telephone.

The UGTT trade union confederation had called for a general strike, which analysts said would test whether the president had managed to calm public anger with his speech.

Evacuation
Several countries, including Britain and the United States, have advised citizens to stay away, threatening the tourism trade that is Tunisia’s economic lifeblood.

Holiday operator Thomas Cook said on Friday it was evacuating almost 4 000 German, British and Irish tourists from Tunisia and TUI Travel said it was laying on aircraft for those who wanted to return and cancelling its next flight on Sunday.

Ben Ali set his departure date in an emotional speech after weeks of deadly clashes between protesters and police.

The government puts the death toll at 23 but the Paris-based International Federation for Human Rights said it has the names of 66 people killed.

“We’ve made it clear we believe there needs to be investigations. A large number of people have been killed and there are very serious allegations of the manner of these killings,” Colville told a briefing in Geneva.

Fed up
Many of those involved in the protests said they were fed up with unemployment, a lack of liberty and the huge wealth of a tiny elite under Ben Ali, and they were expecting that he would try to extend his rule for another, sixth term.

But Foreign Minister Morjane told France’s Europe 1 radio that Ben Ali had acknowledged errors and was a man of his word.

Asked about forming a coalition government including opposition leaders such as Najib Chebbi, he said: “I think that is feasible and I think it would be entirely normal.”

Former colonial power France, which criticised Ben Ali’s handling of the protests for the first time on Thursday, urged him to deliver on his promises, as did the European Union.

There is no obvious candidate to succeed Ben Ali, who has dominated political life in Tunisia and sidelined rivals since he seized power in 1987. — Reuters