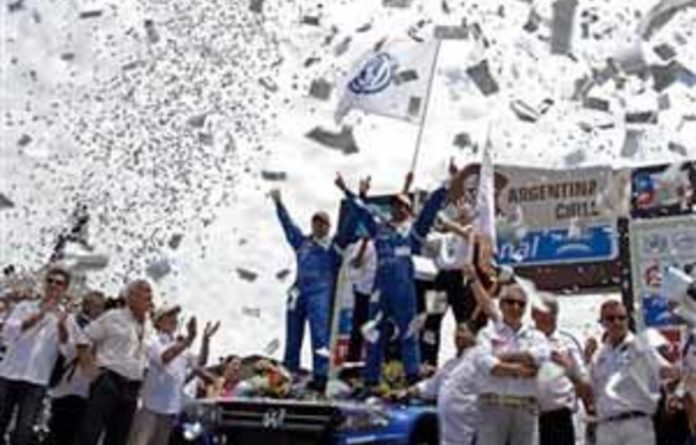 Nasser al-Attiyah of Qatar made up for heartbreak a year ago by finally winning his first Dakar Rally title on Saturday and becoming the first Arab champion of the world’s toughest rally.

Al-Attiyah only had to avoid mistakes on the 13th and last stage, a 181-kilometer (113-mile) sprint on gravel from Cordoba to the Baradero race track, to win the Dakar at his sixth attempt.

Spanish rider Marc Coma won the race for the third time on his motorbike, and Vladimir Chagin of Russia won a record seventh truck title.

Al-Attiyah’s rally credentials were impressive, with six various championships in classic and cross-country rallying since 2008 alone. But until this year, the Dakar had been a mainly frustrating experience. In 2009, al-Attiyah had to pull out when his engine overheated on the sixth stage while he held an overall lead of more than 20 minutes. Then last year, he chased Spanish teammate Carlos Sainz all the way to the end, losing by only two minutes in the closest Dakar finish ever.

This year, he overtook Sainz on Monday in the Atacama Desert and held his nerve and the overall lead to the finish line, calling the victory with his German navigator Timo Gottschalk “the biggest moment of my career”.

“It means a lot to win a Dakar, for me, for my people, for my country and for my team,” he said. “It is a great victory. It’s hard to explain everything that goes through your head. But it is a very nice feeling. We demonstrated that we [Volkswagen] have the strongest team in the world.”

VW has dominated
Since the Dakar moved from Africa to South America in 2009 because of terrorist fears, VW has dominated. A VW driver has won it three straight times, and VW swept the podium for a second straight year. A VW led this race from the start, and won 12 of the 13 stages.

Giniel de Villers of South Africa, the 2009 champ, finished 49 minutes, 41 seconds behind Al-Attiyah for second. Sainz won the 13th stage, and his seventh this year, to hold onto third, 1:20:38 back. Teammate Mark Miller of the United States, runner-up in 2009 and third last year, finished sixth this time.

Sainz, whose title challenge ended on Thursday when he broke his front suspension, was philosophical.

“I am not disappointed,” said the two-time world rally champ. “This is how the race goes. After two tough weeks, there is nothing left to say. I gave it my very best shot.”

In motorbikes, Coma, like al-Attiyah, was all but ensured of victory going into the final stage, but Coma said even then he could not relax on his KTM.

He finished fifth in the stage, 2:16 behind winner Frans Verhoeven of Belgium.

Overall, Coma ended up 15:04 ahead of defending champ Cyril Despres of France. Helder Rodrigues of Portugal was third, 1:40:20 back.

“What was really tough was that I could not let my guard down, not even for a second,” the Catalan said. “Truth is that with the race and the permanent tension I did not have time to think about anything else in a long time.”

“I am going to get some rest and think about the future,” he said.

Coma moved into the lead by winning the fourth stage, giving him a narrow 2-second edge on Despres. The Frenchman was later penalised 10 minutes on the stage for not following starting procedures, leaving him 10:02 behind. He never recovered.

Official awards will be presented on Sunday in Buenos Aires, about 200 kilometers from Saturday’s finish. The rally left the Argentine capital on January 1.

Argentina officials said before the race they expected it to return to Argentina next year. Some reports suggest a new route next year with Brazil possibly being included. — Sapa-AP