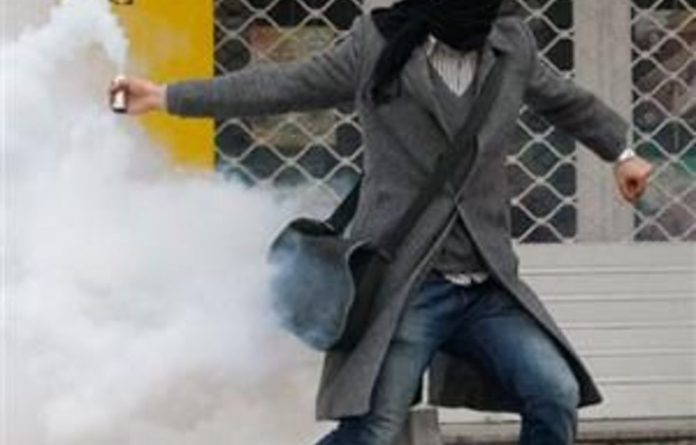 Tunisia’s new coalition government hit trouble on Tuesday when four ministers quit and an opposition party threatened to walk out, undermining efforts to restore stability and end unrest on the streets.

But key figures from the old guard kept their jobs, angering opposition members of the coalition and street protesters.

Police in Tunis repeatedly used teargas in an attempt to break up a protest by several hundred opposition party supporters and trade unionists who labelled the new government a “sham”.

The weeks of protests against poverty and unemployment in Tunisia which forced Ben Ali from office prompted fears across the Arab world that similarly repressive governments might also face popular unrest.

New governement is an ‘insult’
Abid al-Briki of the Tunisian labour union UGTT said its three ministers would withdraw from the government because it included members of Ben Ali’s RCD party.

“This is in response to the demands of people on the streets,” Briki said.

The ministers were given junior positions in the 23-member cabinet, including Houssine Dimassi, nominated for the training and employment portfolio, and two ministers of state, Abdeljelil Bedoui and Anouar Ben Gueddour.

The opposition Ettajdid party will pull out of the coalition if ministers from Ben Ali’s RCD party do not give up party membership and return to the state all properties they obtained through the RCD, state television said.

Opposition Health Minister Mustafa Ben Jaafar also resigned over the presence of RCD members in the cabinet, his party said.

On the streets, protesters insisted that ministers who had served Ben Ali had no place in the government.

“The new government is a sham. It’s an insult to the revolution that claimed lives and blood,” said student Ahmed al-Haji.

“The problem with the interim government is that it has a number of ministers from the old government,” protester Sami bin Hassan said.

Reforms promised
Ghannouchi defended his government, saying some ministers had been kept on because they were needed in the run up to elections, expected in the next two months.

The prime minister said the ministers of defence, interior, finance and foreign affairs under Ben Ali would keep their jobs in the new government.

“We have tried to put together a mix that takes into account the different forces in the country to create the conditions to be able to start reforms,” Ghannouchi told Europe 1 radio.

Ghannouchi rejected suggestions that the Ben Ali “dictatorship” would continue under a new guise.

His foreign minister, Kamel Morjane, said during a visit to Egypt that the interim government would respond to issues that had angered protesters, such as corruption, and would be preparing for new elections. “It may be possible that the next government will not have any member of the former government,” he said.

“The revolution must continue,” Marzouki, who went into exile after being harassed by Ben Ali’s intelligence services, said.

Revolution spreads
In Tunis on Tuesday, people in several parts of the city reported hearing sporadic gunfire overnight but there was significantly less gunfire than on previous nights.

A Reuters photographer in the Ariana suburb of Tunis said local people were organising neighbourhood groups to clean up the damage left by several days of lawlessness.

The government says at least 78 people were killed in the unrest, and the cost in damage and lost business was $2-billion.

Ghannouchi promised to release all political prisoners and to investigate those suspected of corruption. Those behind the killing of demonstrators would face justice.

An Egyptian man set himself on fire in Cairo and another one tried to follow suit, echoing an act of self-immolation in Tunisia that triggered the mass protests that ousted the president. Similar cases have been reported in Algeria and Mauritania.

The wave of protests has hit stock and currency markets from Jordan to Morocco amid fears that the Tunisian unrest would spread abroad. — Reuters