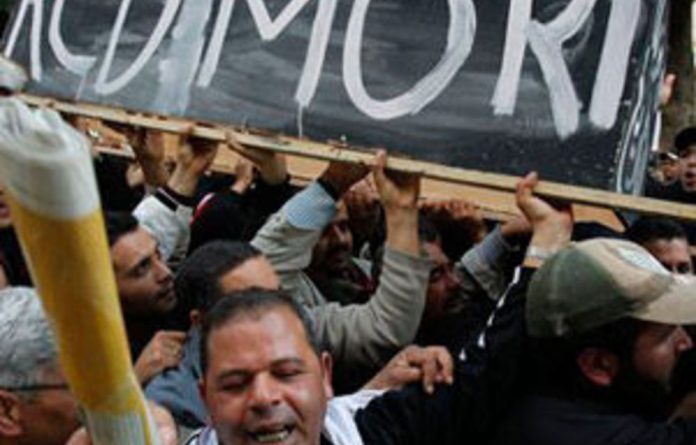 Tunisia’s interim president on Wednesday promised a “total break” with the past and hailed “a revolution of dignity and liberty”, as prosecutors opened a vast inquiry against the previous leader.

Investigators will look into the extensive domestic and foreign assets held by former president Zine El Abidine Ben Ali, who resigned abruptly on Friday and fled to Saudi Arabia after a wave of social protests against his regime.

“Together we can write a new page in the history of our country,” Foued Mebazaa said in an address to the nation in which he also vowed to ensure an amnesty for political prisoners, media freedoms and an independent judiciary.

The new government is to hold its first Cabinet meeting on Thursday amid protests against the inclusion of old regime figures and for the abolition of Ben Ali’s once all-powerful Constitutional Democratic Rally (RCD) party.

In his first public appearance since being sworn into office on Saturday, Mebazaa thanked the army for ensuring security during recent days of chaos.

“We have discovered those responsible for the terror in our country. We have arrested these armed gangs,” he said.

He also paid homage to “the martyrs of dignity and liberty” — a reference to the dozens of people killed in the protests.

“We want a new Parliament, a new constitution, a new republic! People rise up against the Ben Ali loyalists!” about 2 000 protesters chanted at a peaceful protest in the centre of Tunis — one of several around the country.

About 30 protesters later refused to disperse as the night curfew came into force in Tunis. Police and security forces, however, showed restraint, in contrast with recent weeks when they have fired on demonstrators.

Negotiations over the inclusion of the main UGTT trade union in the new government also broke down on Wednesday, following the pull-out of four ministers on Tuesday.

“We cannot take part in a government that includes symbols of the old regime,” Abdessalem Jrad, secretary general of the UGTT labour union after a meeting with Prime Minister Mohammed Ghannouchi.

The government meanwhile gave legal status to three parties barred under the previous administration and freed a dissident journalist, Fahem Boukadous, who was sentenced to four years in prison last year for his work.

The central bank also took over a bank owned by Ben Ali’s brother-in-law in the first such move against assets controlled by the former strongman’s influential family, which formed the core of Tunisia’s business elite.

The authorities also shortened the curfew in place for several days, saying the security situation had improved. But a state of emergency banning public assemblies remained.

Traffic was visibly heavier in Tunis and some shops and offices re-opened.

‘Let’s not throw the baby out with the bath water’
Mebazaa and Ghannouchi on Tuesday quit the RCD party, which in various forms has dominated Tunisian politics and state organisations for decades and has been one of the main drivers of public anger in the streets.

But Ghannouchi and seven other ministers from the previous government under Ben Ali held on to their posts including the interior and defence ministries.

“Let’s not throw the baby out with the bath water,” Tunisia’s Le Quotidien daily commented in an editorial that emphasised the new national unity government was temporary and would prepare for democratic elections.

“The participation of the RCD in this government should not be a source of discord or a stumbling block,” it said.

The tumultuous events in Tunisia — dubbed the “Jasmin Revolution” –have inspired dissidents across the Arab world and sparked protests in numerous countries including Algeria, Egypt, Jordan and Egypt.

Tunisia’s new leadership is due to hold democratic parliamentary and presidential elections in the next six months, although no dates have been set. Under the Constitution, elections should be held in less than two months.

The banned Islamist Ennahdha (Awakening) movement has said it will seek to acquire legal status as a political party to take part in the elections.

One of Ben Ali’s fiercest critics, Moncef Marzouki — who has said he intends to run in the presidential election — also returned to Tunisia on Tuesday after years of exile in Paris, amid emotional scenes at Tunis airport.

On Wednesday he visited the tomb of Mohammed Bouazizi, the 26-year-old graduate forced to sell fruit and vegetables to make a living who set himself on fire last month to protest against the seizure of his stand by police.

His suicide sparked off the protests against Ben Ali’s regime.

“I’m not here for politics. I’m here to pay homage to a region thanks to which Tunisia is acquiring its freedom. It’s thanks to this region that I am here in Tunisia. It’s my duty to come here,” said Marzouki. – AFP

The pandemic has forced us indoors and using more data than ever before, putting more strain on the environment
Advertising