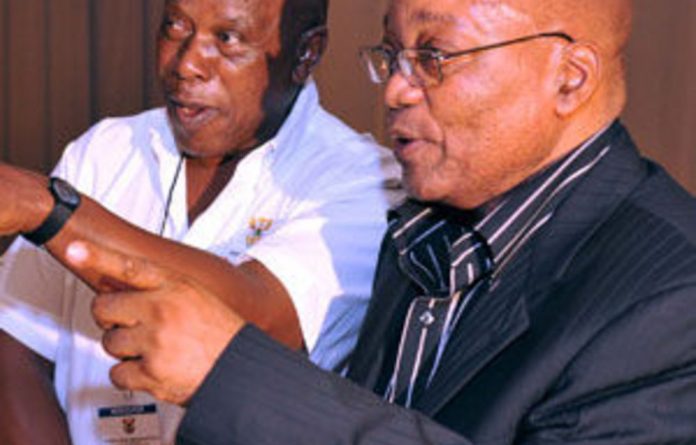 There are uneasy rumblings among some in government circles over the relocation of this year’s government lekgotla to a five-star resort in the Waterberg in Limpopo — usually frequented by beauty queens and sporting legends — at a cost estimated by a senior official to be R15-million.

Government spokesperson Themba Maseko said the cost of the five-day meeting at Legends Gold and Safari Resort had not yet been determined, but was adamant that the R15-million figure was inflated.

With the government’s focus on job creation and Finance Minister Pravin Gordhan’s focus on austerity, some officials said it was unwise for the government to splash out on a luxury private conference venue. Previous lekgotlas have been staged in-house, at the presidential guest house in Pretoria, the area in which most ministers live.

Maseko confirmed that the instructions for the use of the Waterberg venue came from President Jacob Zuma.

“The president felt that in Pretoria there are too many interruptions. Staff members come to have meetings with ministers, the media are there to do interviews. From a logistical point of view, this was the best arrangement,” he said. “The president wanted people to focus on the job at hand.”

Rough calculations by the Mail & Guardian indicate that accommodation alone could set the government back at least R3-million. The cost of meals, travel, infrastructure and security are in addition to this.

More than 200 government leaders attended the lekgotla this week, with some staying the full five days and others leaving early or arriving later in the week. The resort houses up to 284 people, with tariffs ranging up to R3 400 for a double room including breakfast. There is a range of restaurants for other meals and a local watering hole called the Shebeen is available to quench post-lekgotla thirst.

A sizeable security detail joined the political principals and an emergency medical facility was set up. But Maseko insisted that the same infrastructure was installed at the presidential guesthouse and therefore no additional costs were incurred.

The discussions and decisions will inform the State of the Nation address, scheduled to be delivered by Zuma on February 10 in Parliament. Those invited to the lekgotla have been barred from talking about the event to the media.

Quick game of golf
Although sources said Zuma ran a tight schedule, some ministers managed to sneak off for a quick game of golf on the famous course designed by, among others, South Africa golfing heroes Retief Goosen and Trevor Immelman. One of those attending the lekgotla told the M&G that some of the “brave ones” went out in the early morning to play a few holes before the day’s session started at 8.30am.

The golf course offers prize money of $1-million if a golfer manages a hole-in-one from the cliff-top tee of the 19th hole, called the “Extreme 19th”. It could not be established whether any of the lekgotla attendees rose to the challenge.

The resort played host to 112 Miss World contestants last year, as well as swimming champion Roland Schoeman and former Protea cricketers Lance Klusener and Darryl Cullinan. Priding itself on being on the southern tip of the former Monomotapa empire, the resort incorporates this theme into its architecture and layout, and boasts a spa and a museum.

An open air cocktail venue is called the Great Enclosure. The resort also offers helicopter flights and game drives to guests who want to see the Big Five.

A wildlife and cultural centre houses information about antelopes, predators, reptiles and raptors. Guests can relax in a bird sanctuary that houses a tea garden.

The addition of a chapel makes it a popular wedding venue.

In spite of the luxurious facilities, some government leaders were unhappy about the bush outing and the logistics involved. One official told the M&G that his minister, who maintains a gruelling work schedule, complained about the three-hour drive from Johannesburg to the resort and the disruption of being away from the office. The last few kilometres of the trip are on a gravel road.

“[The minister] said it was time-consuming and the gravel road messed up his car,” said the official.

“It’s very nice, but to get here is really a challenge,” an out-of-province attendee said.

The resort has its own airstrip and helipad, but apparently even Zuma arrived by car.

Another government official based in Pretoria said the location was “not the most logical place for a meeting of this kind”.

“It doesn’t have proper conferencing facilities like a big enough conference hall,” he said.

Insiders at the lekgotla said it focused on how to realise Zuma’s call for increased job creation.

Hefty job targets
An official who participated in the discussion said no new money would be allocated to help departments meet the hefty job targets of the new growth path. According to him, the targets were based on government research and agencies that said they were reasonable. “I don’t see that people here are going to get new money,” said a member of the economic cluster. “People are reprioritising their budgets. There’s a lot of shifting taking place to accommodate the president’s call. We’re now trying to figure out what the target should be for this financial year.”

Another official said a “different funding structure” would be applied to help departments achieve the goals.

It became clear at the lekgotla that the jobs to be created may not be permanent, but would stretch across more departments than the expanded public works programme.

At an ANC briefing this week at Luthuli House ANC secretary general Gwede Mantashe outlined the job-creation targets set by the ruling party and government, but would not say whether the jobs created would meet union federation Cosatu’s requirements.

“Our view is that jobs must be created. Once people are employed, they can negotiate conditions, but initially they will enter the jobs with the conditions that are set by the sector,” Mantashe said. He said it was “decent” to have “meaningful and gainful employment. There is nothing as undignified as being unemployed.”

The pandemic taught us a new normal. It’s time to apply some of the learnings to our electoral system, which is overdue for an overhaul
Read more
Opinion