Who is Hans Klaar? 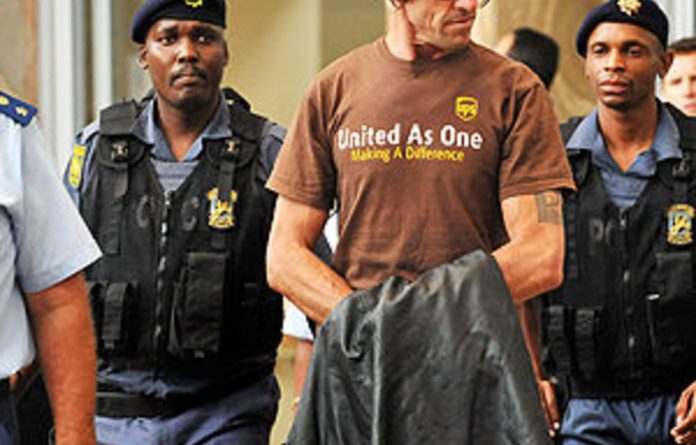 On Friday January 14 2011 the Swiss national Hans Joachim Klaar, handcuffed and escorted by armed guards, stepped off a flight from New Zealand and entered the OR Tambo arrivals hall on his way to a jail in KwaZulu-Natal.

There he will begin serving a six-year sentence for a rape he committed 14 years ago in Durban.

It has been 20 years since I last saw Klaar and, judging by the recent press photographs, he barely appears to have aged. He has the same lantern jaw and he is as lean and wiry at 47 as I remember him in his 20s.

Considering his conviction for rape, his T-shirt seems ill chosen, with a slogan that reads "United As One, Making A Difference". The logo, UPS, for United Parcel Service, appears above his left breast, which is also ironic because, in sailing circles, Klaar is what is known as a cruising trader and has been delivering cargos of dubious provenance from one port to another for most of his adult life.

I first met Klaar in Durban in 1977 when he was 14 and I was 10. My father had just launched our yacht and we were about to set off on a circumnavigation.

Ernst Klaar, his father, owned the Maria Jose, a traditional Thai junk with dark sails and a gloomy, cavernous interior. At that time the Klaar family had been cruising for several years and had battled pirates in the Philippines and survived powerful Hurricane Tracy in Darwin.

'All things nautical'
My father sought their advice on all things nautical. Ernst kept arms aboard the junk and urged my father to do the same. His ideas about educating children were straightforward. If his boys could navigate and sail, he said, what reason was there to teach them anything else?

The boys' sister, Inge, was left to wash dishes, which, on the Maria Jose, was deemed a woman's work. The Klaar family was chronically short of cash except for a brief period in the early Eighties after they discovered the wreck of the Santiago, which sank on the Bassa da India reef in the Mozambique Channel in 1585.

They salvaged her treasure of silver coins, cannons and gold jewellery, and sold it on auction. For nearly 20 years the family scrounged and bartered their way around the Indian Ocean, succumbing intermittently to malaria and living almost exclusively on the fish they caught and the rice and beans they kept in two barrels inside their otherwise empty junk.

Six months after meeting them in Durban we sailed south and westward on our yacht, across the Atlantic, Pacific and Indian oceans, scrounging and bartering ourselves for close on a decade.

At the end of 1985, after my family completed their circumnavigation, we met up with the Klaars again in Richards Bay. I had left our yacht two years previously to live with my grandmother and, having passed matric at the age of 18, was about to enter medical school. I spent the summer holiday back on our yacht, often in the company of the Klaar brothers.

Hans, at that time, was 22 and eager to leave home. He had applied to study marine biology at the University of Hawaii but, because of his lack of formal education, had been rejected.

Both Hans and his younger brother, Alex, were tall and strong and had a feral quality, which attracted a steady stream of girlfriends. They did not treat women well and often boasted about how they loved Thailand, where prostitutes were so cheap. One night on the beach that summer I learned to my detriment that Hans was not very good at listening when a woman said no.

Sailing forth
Over the next five years I saw Hans Klaar intermittently as he passed in and out of Richards Bay. He delivered a yacht to Europe and used the proceeds to buy a small catamaran, which he sailed to Madagascar and back, trading contraband rum, vanilla, rare seashells and orchids.

He met Cathryn, a Durban woman who, unfazed by the lack of a toilet or other amenities, moved aboard. Before long they had a child. With the proceeds of his trading and smuggling, Klaar bought a larger catamaran, overhauling it to hold more cargo and renaming the vessel the Rapa Nui. Two more children followed.

Several years later he was in the Caribbean with Cathryn and their children, making a name for himself in the yachting community with his sailing skills and the unusual crab-claw rig of his catamaran.

In July 1998 an article by James Baldwin in Cruising World described a meeting with Klaar in Trinidad, calling him larger than life and self-sufficient, a man who was known in every port of the tropical Indian Ocean, who sailed without an engine or electronics and who shot wild pigs and goats on islands with a crossbow to feed his family. Klaar told Baldwin that he planned to build a 75-foot traditional Polynesian voyaging catamaran to explore the Pacific Ocean. He was at that time 35 years old.

Later that year he was charged and convicted in the Durban Magistrate's Court for a crime he committed in 1996. He appealed on "humanitarian grounds" and in August 1999, the sentence was altered to six years' imprisonment, three of which were suspended. But, instead of presenting himself for jail in September 1999 he fled the country on his yacht, apparently without his wife or children.

With his name on an Interpol red notice, Klaar sailed the Rapa Nui across the Atlantic, through the Panama Canal to New Zealand, where he sold her in 2005. He then spent time in West Africa, designing and building the Ontong Java, a 70ft-plus asymmetrical Polynesian-style catamaran with large storage holds and the same unusual crab-claw rig. He cruised the Atlantic and Pacific oceans for two years, posting his progress online at the Wharram website for unique catamarans.

Videos can be found online of his remarkable craft and websites extol his skill as a legendary navigator, trader and sailor. When he made landfall in Opua, New Zealand, in December 2009, police authorities intercepted him and extradition ­proceedings were instituted.

News trickled in to Richards Bay in 2006 via sailors coming from Hellville, Madagascar, that Michael Klein, another long-time cruising trader, had been found decapitated on his yacht with his head in his lap and that Alex Klaar had allegedly been jailed in connection with the crime.

Then word spread that the murder had been declared unsolved due to lack of evidence, that Alex had been released and was allegedly once again ferrying cheap rum from Madagascar to the Comoros Islands.

Violence and crime are the dark, piratical side of ocean sailing. Sailors have altercations that are sometimes settled brutally. Yachts are stolen and men and women fall overboard, or are shot and buried on desert islands.

Lawlessness attracts a certain cachet among a sector of the sailing community — those who escape for a life at sea often do so to be free and not necessarily to be better people. Ernst Klaar raised his two sons to be navigators and sailors and in those skills they excelled. I wonder if he still feels that that was all they needed to know.

Is Tim Noakes the Malema of medicine?

The breathtaking world of freediving

Diamond mines are not forever

Living in the shadow of denial