In the shadow of Nigeria’s Taliban 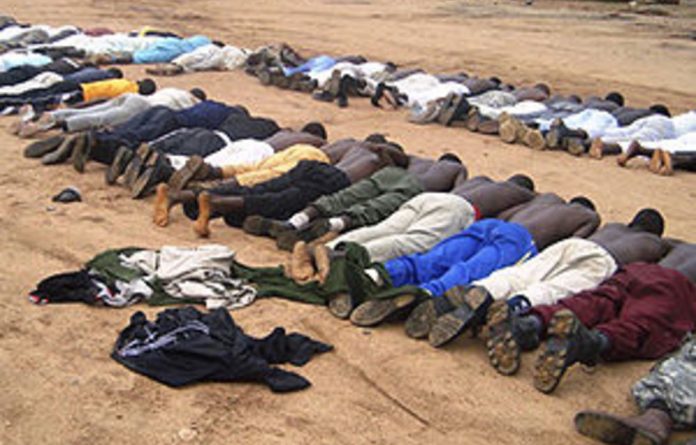 They were hot and tired and eager to get off the overcrowded truck. Then they heard the crack of gunfire.

“My six-year-old son was in my arms,” said Binta Ahmed. “He was hit in the head by a bullet and died on the spot. There were bloodstains all over our belongings and my other children were scared and screaming.”

Now Ahmed, a 40-year-old widow, lies on a bed in a spartan care ward of the Maiduguri University teaching hospital. She rolled up a colourful skirt to show a bullet wound in her leg.

“Everybody is frightened now,” she said. “People who kill and injure indiscriminately are a danger. I only pray God protects us.”

The gunmen belonged to Boko Haram, a radical Islamist sect demanding that strict sharia law be imposed across Nigeria. The group has carried out a spate of fatal shootings in Maiduguri in recent weeks and in December claimed responsibility for bombings and church attacks across Nigeria that took at least 86 lives.

Boko Haram has also been dubbed the Nigerian Taliban, with its leader pledging support to al-Qaeda.

Police say they have evidence of foreign fighters swelling its ranks and weapons smuggled across the country’s porous borders. But whether Boko Haram is receiving financial, logistical or ideological support from al-Qaeda remains ­tantalisingly opaque.

In a United States diplomatic cable dated February 2 2010, released by WikiLeaks, French diplomat Laurent Bigot warned that al-Qaeda in the Islamic Maghreb “is apparently in direct contact with Nigerian extremist group Boko Haram, who might issue a communiqué in the coming days confirming an operational partnership between the two groups”.

There is no mistaking the grip Boko Haram exerts over Maiduguri, a small, underdeveloped city that can strike visitors as more Afghanistan than Africa. Signs warn strangers that they are living under sharia law, military vehicles patrol while helicopters thunder overhead, cattle wander along potholed roads, rubbish piles up unchecked and children go skinny-dipping in rancid waters.

Quieting down
At night the once bustling and noisy streets are almost deserted because of a police curfew. Motorbike movement has been restricted because this was Boko Haram’s favoured transport for hit-and-run shootings.

It has failed to stop their advance, however. Residents say the group’s members have shaved off their long beards and abandoned their red or black headscarves so they can mingle with, and spy upon, the community.

They are even said to have infiltrated the provincial government and police, meaning that no one can feel safe. Abubakar Mustapha, professor of Islamic jurisprudence at Maiduguri University, said: “We are all scared. Boko Haram is very serious because neither the security agencies nor the common people know who they are.

They have no sign and no symbol. The only symbol they have is they have killed somebody and disappeared. It is very dangerous for the government and puts the security agencies in a dilemma.”

Even the exact meaning of “Boko Haram” is elusive. It is often interpreted as Hausa for “Western education is sinful” — the sect’s late leader, Mohammed Yusuf, denied that the world is round. But Mustapha (62), who is also chairperson of Maiduguri’s sharia implementation committee, gave a direct translation as: “A dislike of the non-utilisation of those who are educated.”

He argued that Boko Haram was born of frustration at limited opportunities that were ultimately blamed on government corruption. “Many are intelligent and educated and most have memorised the Qur’an entirely. But further education has become extremely difficult for them. All of them wanted to go on to further studies. They are frustrated.”

Elections
Boko Haram is a growing threat to stability in Nigeria, which, divided between a mainly Muslim north and predominantly Christian south, is preparing for crucial elections in April. The group became active in 2003 and is concentrated in the northern states. Its strict interpretation of sharia law encouraged members to sell their furniture because it was “sinful”.

Last year Abubakar Shekau, a former deputy leader of Boko Haram, appeared in a video and claimed leadership of the group. Shekau, a cleric understood to be in his 50s with two wives, said he was ready to launch attacks on Western influences in Nigeria, expressed solidarity with al-Qaeda and threatened the US.

Estimates of Boko Haram’s size vary from 50 to several hundred and it has a pool of potential sympathisers, especially in reaction to an allegedly brutal police crackdown. “They are Muslims like me so I have sympathy with them,” said Mohammed Abubakar (35), a nurse living close to the sect’s former headquarters that now lies gutted. “It is glaringly obvious that there is a lot of injustice where we live.

I never thought about joining Boko Haram but many of my friends did.” The sect’s insidious spread has created an atmosphere of mutual surveillance, suspicion and paranoia. Abubakar, sitting by a tree near dusty, pock-marked buildings, said: “If you say the wrong thing to the wrong person, they may come to your house and you will be assassinated.”

Many Boko Haram members used to worship openly at Maiduguri’s Indimi mosque. There were warning signs, but the government ignored them, according to its imam, Ibrahim Muhammad Fadul. “Boko Haram mingled with people freely,” he said. “But about six years ago we understood there was a misconception in their religious interpretation.”

Asked if he believed Boko Haram is in contact with al-Qaeda or other hardline Islamic groups, Fadul said: “Some Boko Haram members have gone to Somalia or Sudan. Some people say foreigners have come here to join.

“Most of the weapons used here, such as AK-47s and handguns with 20 to 30 rounds, have been smuggled in through borders.”

Fadul criticised the official response to the problem. “The government and police are going about it the wrong way. The right approach would have been plainclothes security men instead of soldiers and policemen. The mere presence of military men and police arresting people arbitrarily and abusing them creates a lot of fear. That isn’t right in a democratic setting.”

Police deny they use overzealous tactics that could prove a recruiting sergeant for Boko Haram. Mohamed Abubakar Jinjiri, police commissioner in Borno state, said: “I can say with all confidence and sincerity, the situation is under our control. We have been receiving intelligence as to the fundamentalists’ hideouts. We have been able to get to all the nooks and crannies and we are interrogating them.”

Jinjiri estimated Boko Haram’s strength at 400 to 500 men, some of whom have fled to neighbouring Chad and Niger. He said there was no sign of a direct link with al-Qaeda and there had been no suicide bombers, but he was aware of AK-47s being smuggled across borders.

In a previous job in another state, he said, American operatives presented him with lists of wanted terrorists such as the counterterrorism calendar 2009, with profiles including Afghanistan’s Mullah Omar. “They said it’s possible terrorists will come to Nigeria.” — Guardian News & Media 2011

The murder of Fikile Ntshangase in KwaZulu-Natal was not an isolated incident. Around the globe, from Nigeria to Brazil, environmental activists are similarly being silenced, and it is our duty to continue this struggle
Read more
Article

If Nigerians got to choose the next US president, Donald Trump would be the clear favourite
Read more
Advertising