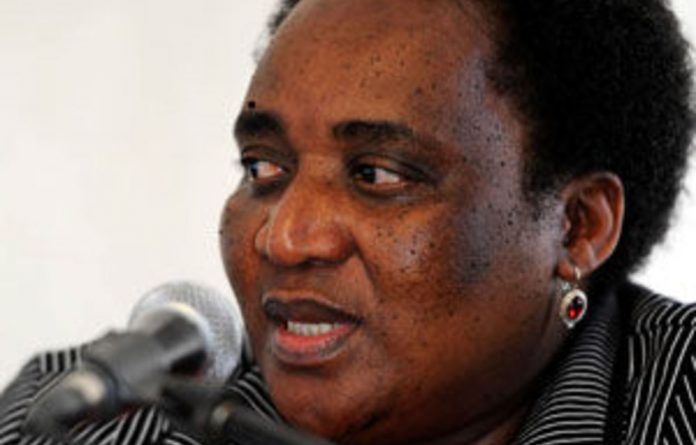 And as she came in for some tough questioning from the worker representatives, the media were abruptly asked to leave the meeting.

Earlier, Oliphant had told the conference that the government’s aim was to create a policy framework to “promote decent work”.

“Decent employment can only be successful when all stakeholders constantly keep in mind the context of the South African and global economies, [and] social realities such as poverty, inequality and education levels,” she said.

Her speech was to be followed by input from Economic Development Minister Ebrahim Patel and Trade and Industry Minister Rob Davies, to which the media were initially invited.

Trade unionists tackled Oliphant on why the government appeared to be backtracking on its stance on “decent work”, on the issue of labour brokers, and on what they said was the snail-pace implementation of new labour laws.

President Jacob Zuma in his June 2009 State of the Nation address said the “creation of decent work will be at the centre of our economic policies”.

Oliphant told delegates the “meaning of decent work” should include health and safety conditions of employees.

“When you talk about the workers that are working in a restaurant or a shop or whatever industry … you look at the health and safety under which those workers are working,” she said. “Workers should be trained to use whatever precautionary measures when it comes to their own safety.

“A living wage, yes, at a later stage it’s going to be part of these things.”

Oliphant said the recession had led to the loss of another million jobs, leaving about 6,4-million South Africans unemployed.

“Job creation is now an overriding priority for government, and hopefully for our social partners as well. The key test of our policies will have to be their ability to contribute to job creation.

“To put it another way, we have to ensure that our policies do not have negative consequences for employment.”

She said the government wanted both jobs and decent work.

The International Labour Organisation defined decent work as “productive work for men and women in conditions of freedom, equity, security and human dignity”, she said.

“We need to start with productive work.”

She warned that although the economy was showing signs of recovery, it remained fragile and unemployment was still unacceptably high.

“Successful and effective social dialogue is the only solution — but more than ever, we all need to move away from an attitude of winning regardless of the collateral cost, to an attitude of joint consensus-seeking in the interest of all.”

Amendments
Oliphant said her department would be submitting various amendments to labour legislation to Parliament in the 2011/12 financial year.

These included changes to the Basic Conditions of Employment Act, the Employment Equity Act and the Labour Relations Act.

There would also be a new Employment Services Bill.

The African National Congress Youth League has also warned the ANC not to drop the criteria of decent jobs in favour of creating more employment.

Cosatu spokesperson Patrick Craven said last week: “We support the ANC policy from its resolution in Polokwane and the 2009 election manifesto in which decent work was one of the priority areas.”

He said it would be “a cause for concern” if the ANC backtracked on this intention.

The ANC wants to create five million jobs in the next decade. — Sapa