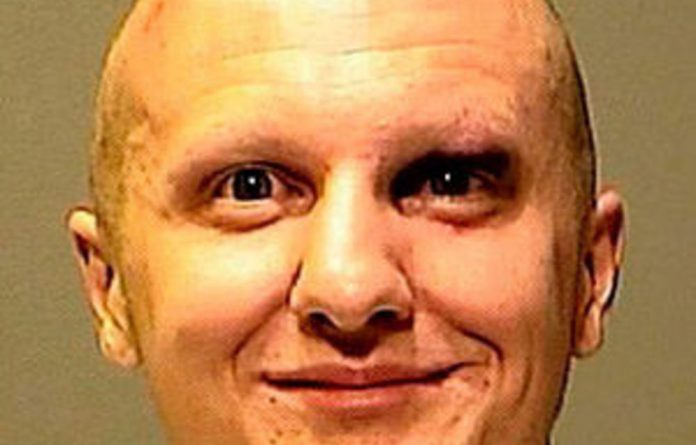 Tucson shooting rampage suspect Jared Lee Loughner pleaded not guilty on Monday to federal charges of attempting to assassinate US Representative Gabrielle Giffords and attempting to murder two of her staff members.

The 22-year-old college dropout is accused of opening fire on Giffords and a crowd of bystanders outside a grocery store on January 8, killing six people, including a federal judge, and wounding 13. Giffords was shot in the head but survived.

Wearing an orange prison jumpsuit and wire-rimmed glasses, the hair on his shaved head starting to grow, Loughner said nothing as the not-guilty plea was entered on his behalf by the judge at his lawyer’s request in a federal court in Phoenix.

The shackled defendant was earlier seen smiling, nodding and chatting quietly with his attorney, Judy Clarke, as the proceedings were about to begin. She patted Loughner on the shoulder as the hearing ended.

Authorities have said Giffords, who remains hospitalised, was his primary target.

The rampage renewed a national debate over gun control in the United States and whether the vitriolic tone of US politics had encouraged violence against elected officials, though the motives for the attack remained unclear.

In the meantime, investigators for the FBI and the Pima County Sheriff’s Department in Arizona are pressing ahead with parallel criminal investigations.

The plea of not guilty was entered for each of the three charges contained in a federal grand jury indictment returned last Wednesday — the attempted assassination of Giffords and attempted murder of two aides who also were struck by gunfire.

Loughner could face up to life in prison for trying to kill the lawmaker and the other two attempted murder charges carry a maximum sentence of 20 years.

Justice department review
The indictment did not include any murder charges for two other federal employees who were slain — Judge John Roll, the chief federal judge in Arizona who had stopped at the supermarket to talk to Giffords, or Gabe Zimmerman, the lawmaker’s director of community outreach.

Before federal prosecutors can charge Loughner with murder, they must first seek a review of the case by the Justice Department, and ultimately by Attorney General Eric Holder, on whether to seek the death penalty.

US District Judge Larry Burns set March 9 as the next court date in the federal case.

Prosecutor Wallace Kleindienst said evidence that included statements from some 250 interviews and dozens of tapes from Loughner’s computer had been shared with the defence. The FBI has said investigators also have video of the rampage.

Burns, normally based in San Diego, California, was appointed to the case after Roll’s colleagues on the Arizona federal bench recused themselves.

In a motion filed on Sunday, prosecutors sought to shift any future proceedings against Loughner to Tucson, citing the principle that defendants stand trial in the jurisdiction where their alleged crimes took place.

Prosecutors also argued that the 19 people struck by gunfire in the rampage, and the “vast majority” of witnesses to the shooting, all lived in the Tucson area.

Clarke said she did not object to moving the proceedings to Tucson but sought clarification on where Loughner would be housed.

Last Friday, Giffords was transferred to a rehabilitation facility in Houston, Texas, following life-saving surgery and intensive care at the University Medical Centre in Tucson in the days after the shooting. – Reuters