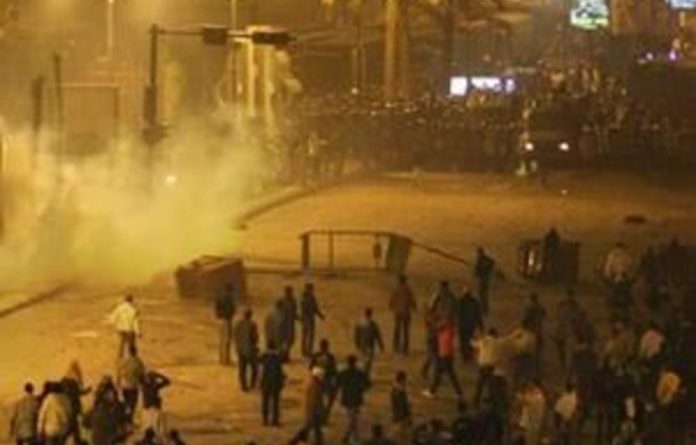 Activists geared up for the biggest protests yet on Friday to end Egyptian President Hosni Mubarak’s three-decade rule, while demonstrators fought security forces into the early morning hours in the eastern city of Suez.

Emboldened by this month’s revolt that toppled the authoritarian leader of Tunisia, Egyptians have staged mass protests since Tuesday in an unprecedented outburst of anger against Mubarak’s strong-handed rule.

“This is a revolution,” one 16-year-old protester said in Suez late on Thursday. “Every day we’re coming back here.”

Nobel Peace Prize winner Mohamed ElBaradei, who returned to Egypt from Vienna on Thursday, has called for Mubarak to resign and said he would join the protests on Friday.

Internet access was shut down across the country — at one point completely. Cellphone SMS services also appeared to be partially disabled, working only sporadically. The government has denied disrupting communications networks.

A page on Facebook listed more than 30 mosques and churches where protesters were expected gather.

“Egypt’s Muslims and Christians will go out to fight against corruption, unemployment and oppression and absence of freedom,” the page said, adding more than 70 000 had signed up online.

In Suez, which has been ground zero for some of the most violent demonstrations, police fired tear gas at protesters who hurled stones and petrol bombs into the early hours of Friday. Fires burned in the street, filling the air with smoke.

The city fire station was ablaze. Waves of protesters charged towards a police station deep into the night. Demonstrators dragged away their wounded comrades into alleys.

At another rally near Giza on the outskirts of Cairo, police used tear gas to break up hundreds of protesters late at night. Cairo, normally vibrant on a Thursday night ahead of the weekend, was largely deserted, with shops and restaurants shut.

Security forces shot dead a protester in the north of the Sinai region on Thursday, bringing the death toll to five.

Video images obtained by Reuters showed the man among a small group of protesters some distance from the security forces when he suddenly collapsed with a gunshot wound and was dragged away by other demonstrators. The video circulated widely on the internet, galvanising anger.

‘Wiped from global map’
Internet and SMS services flickered on and off through the night. United States-based Internet monitoring firm Renesys said Egypt’s web access was totally shut down early on Friday, an event it called “unprecedented in internet history”.

“Renesys observed the virtually simultaneous withdrawal of all routes to Egyptian networks in the internet’s global routing table,” it said. “The Egyptian government’s actions tonight have essentially wiped their country from the global map.”

At least eight senior officials of the Muslim Brotherhood opposition group were arrested overnight. A security source said authorities had ordered a crackdown on the group.

The Brotherhood has kept a low profile during the protests, although of its supporters were expected to join demonstrations on Friday. The government has accused the group of planning to exploit the youth protests for its “hidden agendas”, while the Brotherhood says it is being used as a scapegoat.

ElBaradei and other opposition figures say the government exploits the Islamist opposition to justify authoritarianism.

The United States is Egypt’s close ally and major donor, and has tread carefully over unrest in a country it considers a bulwark of Middle East stability.

In his first comments on the unrest, US President Barack Obama avoided signs of abandoning Mubarak but made clear he sympathised with demonstrators.

“… I’ve always said to him that making sure that they are moving forward on reform — political reform, economic reform — is absolutely critical to the long-term well-being of Egypt,” Obama said in comments broadcast on the YouTube website.

“You can see these pent-up frustrations that are being displayed on the streets.”

Frustrated
As in many other countries across the Middle East, Egyptians are frustrated over surging prices, unemployment and an authoritarian government that tolerates little dissent.

Many of them are young. Two thirds of Egypt’s 80-million people are below the age of 30, and many of them have no jobs. About 40% of Egyptians live on less than a $2 a day.

The government has urged Egyptians to act with restraint on Friday. Safwat Sherif, secretary general of the ruling National Democratic Party, told reporters:

“We hope that tomorrow’s Friday prayers and its rituals happen in a quiet way that upholds the value of such rituals … and that no one jeopardises the safety of citizens or subjects them to something they do not want.”

ElBaradei (68) a former head of the UN nuclear watchdog who has campaigned for change in his native country since last year, told reporters at Cairo’s airport he would take part in Friday’s protests. He added: “I wish we did not have to go out on the streets to press the regime to act.” – Reuters