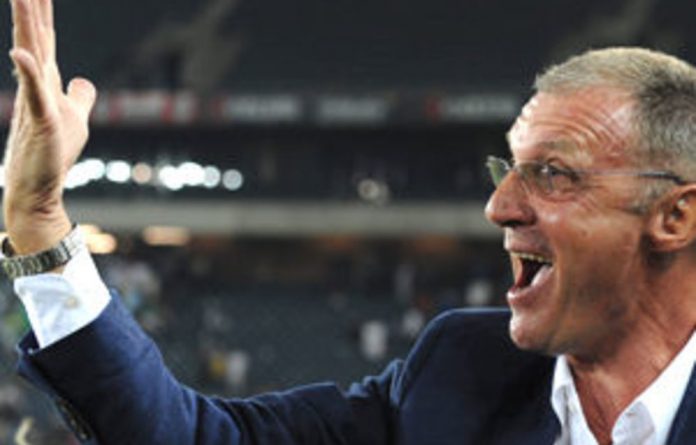 With most of the teams in the first four positions coached by foreigners there is a fiery debate raging in local football about club owners employing non-South Africans to coach Premier League clubs.

Foreign coaches have been described as mercenaries, clueless, and butchers of the local style, lacking respect for local traditions and cultures and bringing in nothing to advance local football.

But it is interesting to note that Dutchman Ruud Krol’s Orlando Pirates are the flavour of the month and are topping the standings. So all those who were passing snide remarks behind his back, saying that he is a stooge and is told which team to field, must be cursing — while the smug Dutchman, with the Buccaneers at the top of the table, must be considering how best to lead the long-suffering team to the land of milk and honey.

“I do not think Krol would accept the indignity of a situation where someone else is selecting the starting team for him,” says Farouk Khan, a former Kaizer Chiefs assistant coach.

“If he accepts that, he will lose his credibility. Look at José Mourinho for instance. Benfica wanted to get funny with him and he resigned on the spot. And I suspect Krol would do the same if someone interfered in his job.”

In a country where the game is characterised by the shibobo — body wave, feinting, skipping the ball and pretending to go this way but going that way — we find ourselves in a situation where foreign coaches are accused of destroying the love affair we had with the pig skin and introducing “alien” tactics that have taken the fizz out of the game.

“Our boys no longer play the South African way,” says Zane Moosa, the former Mamelodi Sundowns dribbling wizard. “We have adopted an alien culture of running down the wing and then pumping crosses into the penalty area in the hope that someone will bundle the ball into the net.

No rhythm, no soul
It is not our style at all. It lacks rhythm and soul. We like to caress the ball a bit, like making love to the pig skin — that’s the kind of relationship we have with the ball.”

Yet, despite the criticism, it is refreshing to hear that everyone agrees that Foppe de Haan, the Dutch Ajax Cape Town coach, and Vladimir Vermezovic, the Serbian Kaizer Chiefs coach, are an altogether different kettle of fish, winning grudging praise even from critics for their respect for the local game, getting their teams to play good football and not tinkering with the styles of the teams.

“In Holland,” writes Stephen Verwey, an Amsterdam-based sports journalist, “our kids are taught from U-8 all the basics about the 4-3-3 system. By the time they are 12 they have already mastered everything about the system. Even if they are taken outside the country the system remains in their blood. That’s the Dutch way.”

Moosa says there are no longer personalities in the game who provide entertainment. Consequently the game has become one dimensional and boring and people are either staying away or would rather spend their time elsewhere than support football.

“We have become rigid, like automatons, and can no longer think on the ball. We follow instructions of the coach to the letter and supporters can no longer identify with play-makers because we are too scared to experiment or take risks.”

The difference
Tebogo Moloi, a former Orlando Pirates schemer, agrees: “If a player performs a trick and does a stepover, a foreign coach will shout and reprimand him, [telling him] not to mistake the field for a circus. But when Lionel Messi or Cristiano Ronaldo do the same thing, they are hailed as exceptional talents and encouraged to do it again.”

Khan believes that apartheid has messed up our capacity to think — we have been brainwashed into believing that everything European is superior — and which is why there are so few local coaches in the PSL, even though some of the foreign coaches have been “recycled” and have achieved nothing to shout about.

But Moloi is full of praise for the respected Dutch coach Guus Hiddink, with whom he had the honour and pleasure of working for a day — Moloi considers him the best coach in the world.

Men like Hiddink, he says, are the kind of foreign coaches that we should be employing to pass on their knowledge here and develop our game, rather than the “fly-by-nights” whom we regularly import.

“When our boys performed a simple drill,” says Moloi, “Hiddink took time to correct them and, importantly, accorded them that respect by clearly explaining what he required them to do without pouring scorn and ridicule on them with a superior and condescending attitude.”

Moloi says that it makes him sad that former professional players attend coaching courses and, except for Roger de Sá, Steve Komphela, Clinton Larsen and Manqoba Mngqithi, club owners are guilty of refusing to invest in local coaches and hide behind lame excuses, claiming that our coaches are inexperienced.

“Europeans say we must play like them,” says Khan, “and, because we are subservient, obedient and submissive, we are happy to compromise — and in the process lose our identity and culture at the behest of a foreign coach. Man, that’s a shame!”

Moosa is very critical of Spanish Sundowns coach Antonio Habas López. He says that the philosophy of a Spaniard is to kill you with beautiful, free-flowing football but Habas seems obsessed with defending and at the rate he is going will never succeed at Chloorkop, because he is imposing an alien culture on a ball-playing side like the “Brazilians”.

“He also seems to be a vindictive man,” says Moosa. “Vuyo Mere conceded a penalty against Maritzburg United and, not only did he [López] take him out of his squad, he loaned him to Moroka Swallows, despite the fact that Mere was the only recognisable right back at the club. And Elias ‘Dominguez’ Pelembe missed a penalty against Wits and he was also banished from the team — that’s ridiculous.”

Moosa echoes Khan’s sentiments and claims that the time has come to look after our own. He is full of praise for Celtic coach Clinton Larsen and lauded Celtic for believing in the former Manning Rangers midfielder. He says that Pitso Mosimane was also given a break by SuperSport United and look at him now.