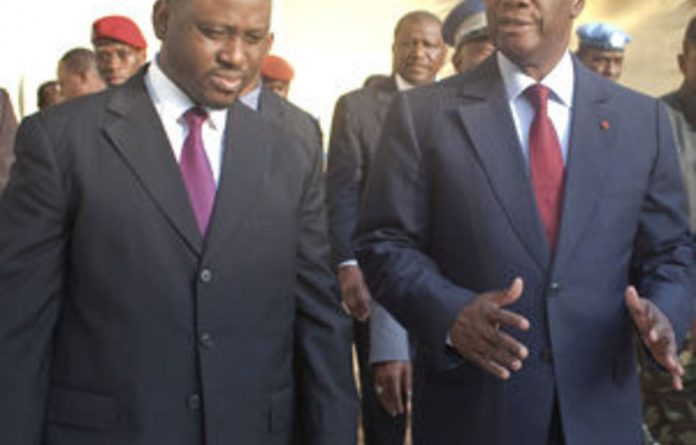 The battle for control of Côte d’Ivoire moved to Pretoria this week as lobby­ists for the presidential rivals, Alassane Ouattara and Laurent Gbagbo, tried to swing the South African government behind their man before the African Union summit in Addis Ababa this weekend.

Gbagbo lost a December run-off election to Ouattara, according to results certified by the United Nations, the Economic Community of West African States (Ecowas) and the AU. But he appears to have the upper hand in the contest for South African influence — Pretoria has become increasingly vocal in its support for his insistence that the outcome should be set aside.

The AU summit, which begins on Friday, will have to devote time to the crisis. Gbagbo has said that there were electoral irregularities and has refused to stand down.

But Ouattara insists that a power-sharing agreement which has been proposed, similar to those of Zimbabwe and Kenya, is not an option. He is attempting to exercise presidential powers while holed up in the Golf Hotel in Abidjan.

International observer groups have declared that the elections were substantially free and fair and Ouattara’s supporters say that a government of national unity would effectively reward the loser for refusing to cede power.

Local and international diplomatic sources all emphasised that the perception was that South Africa was hewing closely to the approach set out by former South African president Thabo Mbeki, who argued that the election was flawed and who favours a power-sharing deal.

Widening the ‘cracks’
Côte d’Ivoire has been suspended from the AU but cracks are appearing in the African position, with South Africa helping to widen them. According to a South African government official, this is simply due to increased awareness about the election.

“The AU was rushed into making the announcement without knowing exactly what happened. Côte d’Ivoire was not ready for elections and therefore the outcome would have been questioned, whichever way it went,” he said.

Pretoria was always reticent about the AU position and it refused to endorse Ouattara, calling instead for a recount of the vote, as requested by Gbagbo.

In the past week Angola and Uganda have also called for a recount. The UN has kept the voting records secure to prevent interference by either side but it insists that Ouattara was the winner.

Guillaume Soro, Ouattara’s prime minister, embarked on a seven-nation tour this week to meet African heads of state. He headed to South Africa where he met Deputy President Kgalema Motlanthe on Thursday.

President Jacob Zuma was in Switzerland and would be going from there to Addis Ababa for the AU summit.
Gbagbo has reportedly visited Kenya and his spin machine in South Africa has gone into overdrive.

Most recently, the leader of the African Christian Democratic Party, Kenneth Meshoe, “declared” that Gbagbo was the president after he had been on a trip to the country, which was organised and sponsored by Gbagbo’s supporters.

Meshoe said he wanted to see Ouattara but was told that Ouattara was “too tired” to see him. However, Ouattara’s supporters say Meshoe refused to observe presidential protocol.

The Mail & Guardian this week interviewed the South African representatives of both Gbagbo and Ouattara.

Unlike many other African countries, Côte d’Ivoire does not have a historical relationship with South Africa and the ANC, which makes access to the power brokers difficult for them, they say.

Sacharia Kone, Ouattara’s representative, came to South Africa shortly after he finished matric in 1994 and is an official at Unisa’s School of Business Leadership.

Kone was a student leader in Ouattara’s movement while at school, but has not been back home since.

France
Gbagbo’s representative, Traore Yacouba, is about to start a PhD in business administration at the Tshwane University of Technology. He came to South Africa in the 1990s as a diplomat but left the embassy to pursue his studies and political work.

To Yacouba and Gbagbo the reason for the disputed elections is clear: the role of France.

“Did you know [French president] Nicolas Sarkozy officiated at Ouattara’s wedding in Paris?” Yacouba asked, claiming that Ouattara’s presidency would restore French colonial rule, albeit in a modern format, in Côte d’Ivoire.

Kone hit back at this allegation. “Did you know Gbagbo gave several strategic assets to the French while he was in charge?” he said. “He conducted three opinion polls in France, his communication team is French and one of the leaders in his group is a former minister in France. And he says we are obsessed with the French?”

The two also have different interpretations of Mbeki’s role. “Now there is a real negotiator, not like the types you see today. I have real respect for the way he was able to take us forward,” said Yacouba, referring to Mbeki’s mediation efforts in 2005 in Pretoria.

Kone said that the Ouattara camp had trusted Mbeki as an impartial mediator during negotiations, but that their view had since changed.

“He fell for Gbagbo’s pan-Africanist talk and, when Ivorians were killed in a scuffle with French troops, he also started to believe that it was imperialists trying to take back the Ivory Coast. We lost confidence in him and we knew he would fail when he went to mediate there [Côte d’Ivoire] in December.”

Another point of dispute between the two is whether a recount of the votes, which Gbagbo proposes as a solution, is viable.

“All we want is the votes to be recounted — they did it for the first round of elections — and then we can see who won,” said Yacouba.

Copies of the election results, as tallied by the independent electoral commission (IEC), show Ouattara winning 54,1% of the votes and Gbagbo 45,9%.

The results released by the Gbagbo-appointed constitutional council reverse the position their figures give Gbagbo the upper hand, with 51,45% of the votes and Ouattara 48,55%.

The reason for the disparity is simple — more than 700 000 of votes included in the IEC count were nullified by the council. Most of the excluded votes were from regions where Ouattara made a clean sweep.

Gbagbo supporters cite as irregularities incidents where his supporters were not allowed to vote and that the IEC announced the election results at the Golf Hotel, now Ouattara’s headquarters.

Kone said the Golf Hotel, which is guarded by UN peacekeepers, was the only safe venue in Abidjan. The IEC headquarters were, according to Kone, attacked by Gbagbo’s soldiers.

Soro and Ouattara’s local team were due to give a press conference in Johannesburg as the M&G went to press.