It’s time for you to go, Egyptians tell Mubarak 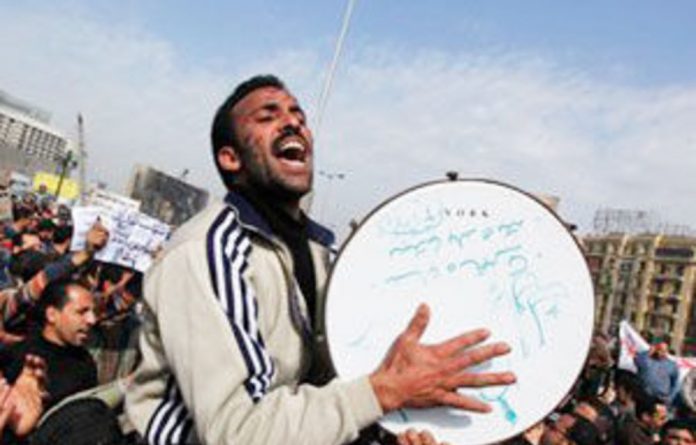 More than 200 000 Egyptian men and women, from students and doctors to the urban poor, rallied in central Cairo on Tuesday in the biggest demonstration so far in an uprising against President Hosni Mubarak’s 30-year rule.

Waving Egyptian flags and banners saying “Bye-Bye Mubarak”, the protesters rejected promises of reform to his authoritarian rule and demanded that he quit. About 20 000 gathered in Suez, chanting: “Leave, leave … revolution, revolution everywhere.”
Opposition figurehead Mohamed ElBaradei said Mubarak (82) must leave the country before the reformist opposition would start talks with the government on the future of the Arab world’s most populous nation.

“There can be dialogue but it has to come after the demands of the people are met, and the first of those is that President Mubarak leaves,” he told al-Arabiya television, saying dialogue would cover transitional arrangements and dissolving Parliament.

Mubarak’s grip looked increasingly tenuous after the army pledged not to confront protesters, effectively handing over the streets to them after they pledged to bring out one million people for anti-Mubarak rallies across the country.

Soldiers in Tahrir (Liberation) Square, which has become a rallying point to protest about poverty and repression, erected barbed-wire barricades but made no attempt to interfere with protesters. Tanks daubed with anti-Mubarak graffiti stood by.

“We have done the difficult part. We have taken over the streets,” said protester Walid Abdel-Muttaleb (38). “Now it’s up to the intellectuals and politicians to come together and provide us with alternatives.”

Effigies of Mubarak hang from traffic lights and some protesters carried a mock coffin.

Unprecedented
The crowd included lawyers and other professionals as well as workers and students, showing the breadth of opposition to Mubarak. Women and men stood together holding hands.

The uprising of a population fed up with corruption, oppression and economic hardship broke out eight days ago and quickly spiralled to a crisis unprecedented during 30 years of rule enforced by ruthless security forces.

The disintegration of Mubarak’s power structure would usher in a new era in modern Egyptian history and reconfigure the geopolitical map of the Middle East, with huge ramifications for Washington and allies from Israel to oil giant Saudi Arabia.

The army, a powerful and respected force in Egypt, dealt a possibly fatal blow to Mubarak on Monday night when it said troops would not open fire on protesters and that they had legitimate grievances and a right to peaceful protest.

Mubarak’s new vice-president, Omar Suleiman, appointed to show the government was willing to bring in reforms, offered to open a dialogue with the opposition.

But the measure, along with the dismissal of his Cabinet and the promise of reform, appeared to be too little, too late.

US sends envoy
“The succession is already under way,” said Steven Cook at the Council on Foreign Relations. “The important thing now is to manage Mubarak’s exit, which must be as graceful as possible at this point. For honour’s sake, the brass won’t have it any other way.”

United States special envoy Frank Wisner, a former ambassador to Cairo, has been sent to Egypt to meet leaders.

The US and other Western allies watched at first in confusion as thousands demanded the downfall of a stalwart ally who has been a key figure in Middle East peace moves.

As the crisis grew, Washington called for reforms and free elections but it is also concerned that Islamists could gain a slice of power should Mubarak be forced out.

Israeli Prime Minister Benjamin Netanyahu also expressed concern on Monday that Egypt could end up with a radical Islamic government like in Iran. He said he hoped Israel’s 1979 peace treaty with Egypt would survive any changes that took place.

But pressure on Mubarak came from elsewhere in the region. Turkey Prime Minister Tayyip Erdogan said Mubarak should listen to the demands of his people.

Erdogan, whose country is often held up as a model for democracy in Muslim nations, said the solution to political problems lay in the ballot box.

United Nations human rights chief Navi Pillay said Tuesday’s protest could be a “pivotal moment” in Egypt’s transition to democracy and called for restraint by the army and police.

Protesters were inspired in part by a revolt in Tunisia, which toppled its president Zine al-Abidine Ben Ali on January 14. But years of repression have left few obvious civilian leaders able to fill any gap left by Mubarak’s departure.

The military, which has run Egypt since it toppled King Farouk in 1952, will be the key player in deciding who replaces him. Some analysts expect it to retain significant power while introducing enough reforms to defuse the protests.

ElBaradei, former head of the International Atomic Energy Agency (IAEA), has offered to act as a transitional leader to prepare Egypt for democratic elections.

Many Egyptians, however, have said they had reservations about the Nobel Peace laureate, who has spent much of his recent career outside the country.

Muslim Brotherhood
Among the more organised in the opposition is the hitherto banned Islamist group, the Muslim Brotherhood. It stayed in the background early in the uprising but is now raising its profile, seeking to tie up with ElBaradei.

The Brotherhood said on Monday it was calling for protests until the whole establishment departed — “including the president, his party, his ministers and his Parliament”.

At least 140 people have died since demonstrations began last Tuesday, most in clashes between protesters and the hated police forces. Violence also broke out in Suez, Alexandria and other cities.

Foreign governments have taken steps to evacuate nationals trapped by the unrest, including thousands of tourists. Companies also pulled out staff as the confrontation brought economic life to a halt.