Chaos as rivals clash in Cairo 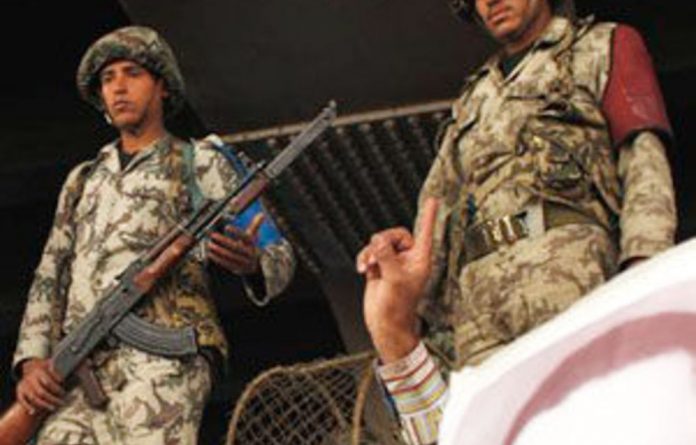 Partisans from both sides threw stones and set on each other with sticks and fists in Tahrir Square, the epicentre of anti-regime demonstrations, a day after the embattled president rejected demands to step down and vowed to stay on to the end of his term.

Fighting took place around army tanks deployed in the square, with stones bouncing off the armour, an Agence France-Presse (AFP) reporter said, adding that at least 10 people were injured in the first fighting.

Soldiers took cover from the projectiles, and the windows of at least one army truck were broken. Some troops stood on tanks and appealed for calm but did not otherwise intervene.

The clashes occurred just hours after the army urged people to go home and allow a return to normality.

Amid the chaos, Mubarak partisans charged in on camel and horseback, an AFP correspondent said.

At least six riders were dragged from their beasts, beaten with sticks and taken away with blood streaming down their faces.

One of them was dragged away unconscious, with large blood stains on the ground at the site of the clash.

The worst of the fighting was just outside the world famous Egyptian Museum, which was targeted by vandals last week.

Three opposition groups said in a statement that “members of security forces dressed in plain clothes and a number of thugs have stormed Tahrir Square”.

Restraint
The renewed violence comes despite calls by close ally the United States and other nations for Egyptian authorities to allow anti-government protests to proceed peacefully, with both sides exercising restraint.

The army issued its call after Mubarak addressed the nation late on Tuesday, pledging not to run for re-election in September after 29 years in power, and saying he would seek to ease the conditions for presidential candidacy.

But Mubarak did not offer to step down immediately, the key demand of protesters who have flooded the streets of Egypt’s cities since January 25.

Demonstrators said they would proceed with plans for a massive protest on Friday, their designated “departure day” for Mubarak.

“We will demonstrate on Friday, the ‘Friday of Departure’, and we expect more than one million people to take to the streets across all of Egypt to demand the fall of the regime,” opposition activist Iman Hassan told AFP.

And the opposition Muslim Brotherhood said there was “no alternative” but ending Mubarak’s regime, rejecting his plans to leave after his mandate ends.

State news agency Mena said Parliament had been suspended so allegations of fraud in last year’s legislative elections could be investigated, a move promised last week.

The government also announced it would shorten a widely ignored curfew, and internet access was at least partially restored for the first time in five days.

A military spokesperson said, “the army calls on protesters to go home to restore security and stability in the street”.

That call set the stage for confrontation with protesters, who had been buoyed by a promise from the military that it regarded the protesters grievances as “legitimate” and would not open fire.

Rallies
Ahead of Wednesday’s clashes, supporters of the president staged a number of rallies around Cairo, saying Mubarak represented stability amid growing insecurity, and calling those who want his departure “traitors”.

“Yes to Mubarak, to protect stability,” read one banner in a crowd of 500 gathered near state television headquarters, about 1km from Tahrir Square.

A witness said organisers were paying people 100 Egyptian pounds ( $17) to take part in the pro-Mubarak rally, a claim that could not be confirmed.

Other pro-Mubarak demonstrations occurred in the upmarket Mohandeseen district, as well as near Ramses Square where they harassed people heading for Tahrir Square.

“What more do you want? In any case Mubarak won’t stay. You must leave or blood will flow,” the small but vociferous crowd shouted.

Despite years of ambiguity over whether he would seek a sixth term and his refusal until this week to even name a vice-president, the 82-year-old Mubarak insisted he had never intended to stay in office beyond this year.

“I say in all honesty, and without taking into consideration the current situation, I was not planning to present myself for a new presidential term,” he said.

Egypt is “the nation I have defended and in which I will die”, he said, rejecting the possibility he might flee as veteran Tunisian strongman Zine al-Abidine Ben Ali did in January after a popular revolt ended his rule.

Mubarak said the country had a choice “between chaos and stability” after the clashes between protesters and security personnel that have left an estimated 300 people dead and more than 3 000 injured.

“My first responsibility is now to bring security and stability to the nation to ensure a peaceful transition of power,” he said on Tuesday night, to boos from the thousands still gathered in Tahrir Square.

US President Barack Obama, who spoke to Mubarak after the speech, went on television to say he had told the Egyptian president that an orderly transition needed to begin immediately.

“What is clear, and what I indicated tonight to President Mubarak, is my belief that an orderly transition must be meaningful, it must be peaceful and it must begin now,” Obama said.

‘Gaining momentum’
The European Union echoed that on Wednesday, with foreign affairs chief Catherine Ashton urging Mubarak to act “as quickly as possible” on a transition.

Obama’s announcement went a long way to meeting quietly voiced US calls for him to make his future plans plain. A US official described it as significant but raised doubts about whether it would be enough.

“What’s clear is that this is a movement that is gaining momentum; it’s not going to go away. And it’s not likely to be enough,” said the official, speaking on condition of anonymity.

The revolt has sent jitters throughout the Middle East, coming after the uprising in Tunisia and with analysts warning of a domino effect through the Arab world.

Yemeni President Ali Abdullah Saleh, also facing demands that he quit, said on Wednesday he will freeze constitutional changes that would have allowed him to be president for life and delayed a controversial April poll.

In Jordan, King Abdullah II sacked his government after weeks of demands for change, while a Facebook group of Syrian youth called for a peaceful revolution to start on Friday.

With no sign of an end to Egypt’s biggest uprising in three decades, foreign governments have been scrambling since the weekend to pull their nationals from the country, leading to chaotic scenes at Cairo’s airport. — AFP