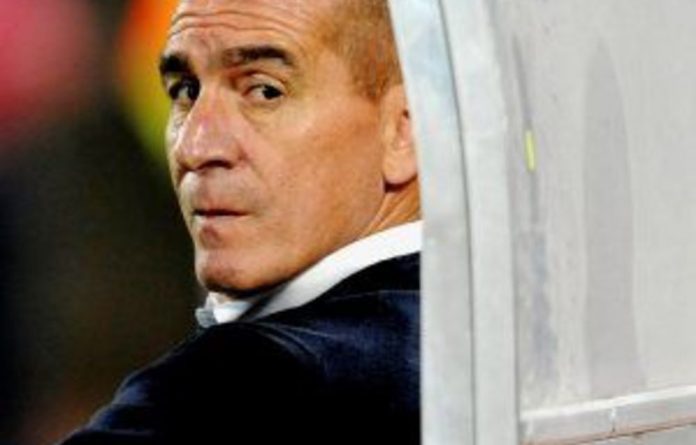 A bus load of Orlando Pirates supporters once invaded a training session conducted by Gordon Igesund and threatened to assault him unless he quit, which he eventually did. And former Moroka Swallows coach Walter da Silva was kidnapped and driven around the streets of Johannesburg blindfolded and then released after being “requested” to do the right thing.

But the wheels started coming off a week before Christmas. AmaZulu handed them a 3-2 beating at home. It was followed by a sequence of shocking results and when they succumbed to perennial enemies Kaizer Chiefs and were toppled from their pedestal to fourth their supporters could no longer stomach it — they wanted López out.

Their simmering frustrations were compounded by Katlego Mphela who went on strike, demanding a written guarantee that he would be released to join Serbian side Partizan Belgrade at the end of the season. If not, he would boycott training and official matches until his demands were met.

Amid the unfolding drama, the supporters wanted to vent their frustrations on someone, anyone and poor López, who has not endeared himself to Sundowns supporters by speaking Spanish and not English, became the target.

Reports started filtering through that López had become a difficult task master, that the man who was a favourite of the players had become a vindictive stranger, restricting players from expressing themselves on the field, preferring instead to play an alien defensive game — and woe betide any player who failed to ­follow his instructions.

Papi Zothwane is alleged to have been a victim of the Spaniard’s rigid regime, as was Elias Pelembe, who was dropped from the team, coincidentally after missing a penalty against Wits. And when Vuyo Mere conceded a penalty against Maritzburg United, he was banished to the stands and then sent to Swallows on loan. Chloorkop was becoming a battleground but no one dared complain.

‘Run and call Mphela’
Harold Legodi was appointed assistant and the former Sundowns stalwart apparently clashed verbally with López on the first day that he arrived. Several players claim López sent Legodi on an errand in front of them and Legodi bristled but contained himself.

“But when he asked Legodi a day later to ‘run and call Mphela’ from the dressing rooms before a training session, Legodi is said to have exploded and unpleasant words were exchanged,” according to eyewitnesses, who said with a smirk that Legodi stood his ground — a clear sign that López might be on the verge of losing the dressing room.

But the simmering tension in the club exploded into the open last week when a group of disgruntled supporters barricaded López in the dressing room, threatened him with violence and said he was no longer needed at the club. He had to be sneaked out of the stadium in the back of a police van. His lawyers requested an assurance from the club that the safety of their frightened and shaken client would be guaranteed.

Club president Patrice Motsepe was out of the country and when he returned he called in his troops to a meeting that lasted into the wee hours of the next morning. The players, it seems, have been told to pull up their socks.

López won a stay of execution on Wednesday when Sundowns secured a 2-0 victory over Swallows and leapfrogged Ajax Cape Town into third position and within touching distance of pace setters Kaizer Chiefs and Orlando Pirates, who lead the race by three points.

And Teko Modise, who arrived at Chloorkop during this turbulent time, made his debut against Swallows. He appeared to be finding his feet and feeling his way around, but early indications are that he could blossom under a canary-yellow shirt if he knuckles down to hard work.

Although Pirates supporters have labelled him a traitor and are not going to forgive him any time soon, if he delivers for Sundowns, their supporters will be content — the South African championship will become a four-horse race with Kaizer Chiefs, Pirates and Ajax Cape Town having a say in the final destination of the trophy.

The month of February could be what the doctor ordered for Sundowns — they face a relatively “acceptable” challenge from Santos this weekend, followed by Vasco da Gama and then a tough assignment against Modise’s former club, Pirates, before rounding off the month with fixtures against Free State Stars and Bidvest Wits.