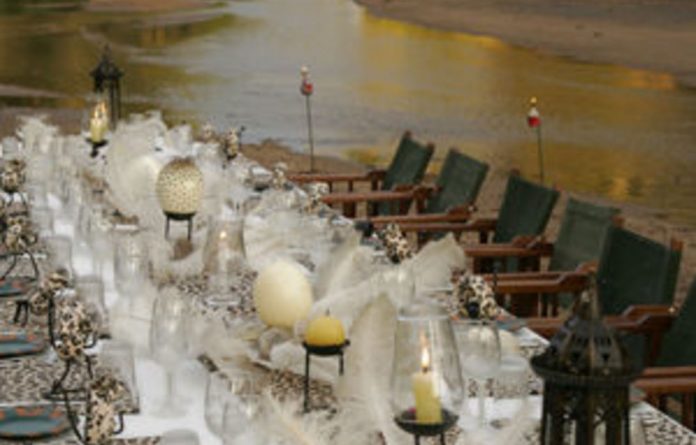 The vistas are dotted with the odd gnarled tree and striped with ragged ribbons of dark-green riverine vegetation. Like a gem on a girdle, Sala’s Camp is at the confluence of two such ribbons, the Sand and the Keekorok rivers, two kilometres from the Tanzanian border.

Here the wildebeest cross into Kenya on their annual odyssey in search of new grazing. The migration is one of Mother Nature’s most celebrated performances and at Sala’s, if you’re lucky, you can get a front-row seat for the opening night.

They arrive in Kenya along the Northern Corridor in June or July each year and leave in September or October. During this time the rolling hills can be black with wildebeest, as if God in his celestial kitchen had gone overboard with a gigantic pepper grinder.

The 1.5-million wildebeest literally eat their way in a big annual circle around the Masai Mara and Tanzania’s Serengeti, the equally famous park, which adjoins the Mara to the south. Sala’s Camp is a seasonal tented camp, open from mid-June to mid-October, to coincide with the migration, and again from mid-December to mid-March.

Even when the migration isn’t in full flow, though, Sala’s is a special place. There are only seven tents, which means that, at most, you will be one of 16 people in camp (the honeymoon tent converts into a two-bedroom family tent). The seclusion is enhanced by being tucked away in a wooded valley, far from the frenetic tourist minibus routes, which can blight one’s Mara experience.

There is something mythical about the camp’s riverside setting. As the early morning sun propped its elbows up over the eastern skyline to glow in our direction, a lone waterbuck splashed carefully across the shallows, while the river blazed like burnished gold with the reflected sunrise. The night before I had sat enraptured in the same spot as fireflies waltzed dizzily to the bubbly melody of the frogs and the mournful trill of a nightjar.

Femmes fatales
Fireflies are fascinating creatures. The males do the flying while the females rest on the ground. Like species attract one another by flashing the same signal, but femmes fatales have been known to attract a male of a different species earthwards by imitating his signal — before devouring him.

Just sitting quietly in camp with a pair of binoculars on your lap and a cold beer at your side, you can see and learn a lot about nature. But to experience the Mara properly, you need to get out and about in the Sala’s four-wheel-drive Land Cruiser, with David Kiptot at the wheel and Lentuala Ololdapash, nicknamed Mrefu (‘Tall”), as your game-spotter.

Kiptot, from the Kalenjin tribe of western Kenya, has been associated with the camp’s owners since he was a boy. A qualified guide, he speaks fluent English, very passable French and knows the Mara’s honeycomb road network like the back of his hand.

Mrefu is a local Maasai warrior, the quintessential strong, silent type. His eyesight is legendary. Poking out lankily from the Toyota’s roof hatch, the metal sequins tinkling gently at the hems of his red tunic, he will amaze you by correctly identifying distant specks.

The Mara was enjoying good, late rains, and the rolling hills of open grassland were lush. At one point we encountered the biggest herd of buffalo I have ever seen — about 250 of them milling about on the plain, like a giant maul of horned rugby prop forwards. Red-billed oxpeckers sat nonchalantly on the buffaloes’ shoulders as they snorted and wheeled around in bad-tempered semicircles.

Later we stopped for coffee and muffins served on the vehicle bonnet. On closer inspection, I could see there were many different types of grasses. I pulled one frond out of the ground by its stem and sampled its subtle salty sweetness. I pulled up another variety. Delicious. Were I to be reincarnated as an antelope, I would have been quite content with the grassy feast sprouting all around me.

But I didn’t have to wait long to eat. As we cruised slowly alongside a riverbed, hoping to see a leopard slinking through the thickets, we rounded a bend and there — laid out for us beneath a majestic sausage tree — was a full English bush breakfast.

Bees had settled in a hole in the tree and we were soon called from our breakfast by the persistent chirrup of the greater honey guide drawing our attention to the hive. He wanted us to break in and give him some honey as a reward for helping us to find it and was very indignant when we returned to our toast and honey spooned from a jar on the breakfast table.

On our return to camp it was time to wash away any dust (and with it, my tan) with a hot shower. It was almost a shame to unroll and thus desecrate the fluffy white towel, which had been decorated with an ornamental water grass frond trimmed from the nearby river bank.

No effort is spared in bringing you all the trappings of luxury. I could almost have played mini-golf in my tent, it was so big. Not that I wanted to, of course. Far more enticing was the prospect of sinking into the downy expanse of my double bed, with its unusual headboard of gnarled African olive wood. I took an amazing afternoon nap, with the tent windows open to the scented breeze and the odd flurry of rain mixed with the sound of falling leaves on canvas.

The food is superb, particularly given that most of it comes from Nairobi by plane or by lorry. With such long supply chains, the chances of a box of fresh produce getting offloaded at the wrong airstrip are high but Moses Njoroge and Raphael Ndungu, the camp cooks, seemingly don’t bat an eyelid. Dinner will be served and it will be delicious.

Game walks are prohibited in the Mara, as part of the reserve’s attempts to keep poaching under control. To help break the waist-bulging cycle of meals and game drives, guests are provided with yoga mats and skipping ropes in the tents, as well as a trampoline and — during drier months — volleyball on the sandy riverbed.

As ecologically sensitive tourism goes, Sala’s is pretty sorted. Not only are the tents pitched on the same spot each season, but not a single live tree or bush is cleared to make space or for firewood. A strict waste segregation management system ensures that all non-biodegradable items are sent to Nairobi (300km away) for recycling and, during the months when Sala’s is closed to guests, everything is taken away, giving the site a chance to regenerate with the rains.

When police crashed her wedding, she was 8. Her soon-to-be husband was 67.

Across the continent, women are helping to reimagine a sacred rite of passage in an effort to honour their cultures and spare their bodies.
Read more
Health

When TB strikes, the fight to live can come at the cost of a way of life for the country's nomads. This could help ease the pain.
Read more
Health

​Women of the Maasai fight back for their daughters

Girls as young as 10 feel the blade but an extraordinary group is fighting against female genital mutilation (FGM).
Read more
National

An ugly battle over the suspension of Necsa's chief executive has split state nuke company down the middle.
Read more
Africa

Plans to turn ancestral Maasai land into a reserve for a Dubai royal family appears to be going ahead.
Read more
National

Losing the battle to win the war