‘Take the baton from Tutu’ 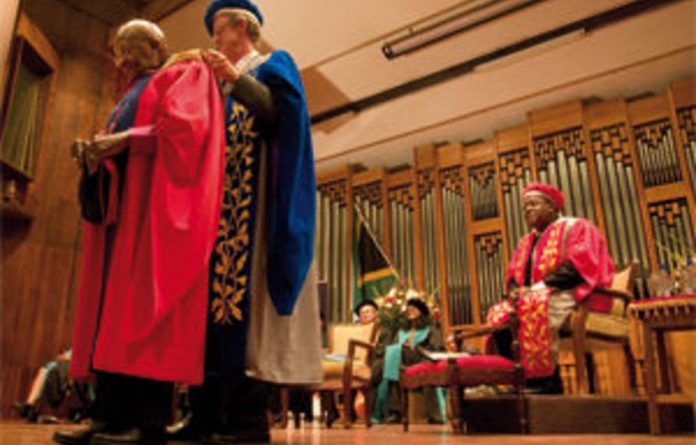 During apartheid black people passing through the Free State who wanted to buy food would be told by white shop owners to use the window and not step into their stores, Archbishop Desmond Tutu recalled during his visit to Bloemfontein on Thursday last week.

Mixing English and Afrikaans, Tutu reminisced about those days when he formally opened the International Institute of Studies in Race, Reconciliation and Social Justice, the University of the Free State’s (UFS’s) latest move to address its long history of racial discrimination. On the same day, UFS’s theology faculty conferred an honorary doctorate on him.

“And so, we have to pinch ourselves at seeing things being turned around, but not in a way that destroys others,” Tutu said. Truth of the kind about black visitors’ treatment in the province during apartheid had to be confronted for the country to heal, he said.

Students who spoke to the Mail & Guardian on the day of Tutu’s visit said UFS had made strides towards transcending its divisive past, but still had a long way to go. They highlighted two points in particular: the continued separation of English and Afrikaans lectures and the incomplete racial integration in UFS residences.

The institute has its origins in UFS’s moves to heal the wounds of the notorious Reitz residence saga in 2008, when four white students humiliated five black workers in a mock initiation ceremony.

Vice-chancellor Jonathan Jansen’s inaugural lecture in October 2009 became a national talking point, with even the Cabinet weighing in, for its announcement that the university would withdraw its pursuit of charges the state was bringing against the “Reitz Four“.

Jansen’s announcement was widely interpreted at the time as dropping the charges against the four. In fact, the four were subsequently found guilty in the Bloemfontein Magistrate’s Court of crimen injuria. Charges against them are still pending in the Equality Court.

UFS’s gesture of reconciliation was to invite the students to return to campus, from which they had been expelled, Jansen said at his inauguration. A new institute dedicated to the study of race, reconciliation and social justice was one of several measures the UFS would take to address the legacy of the Reitz scandal and the university’s 100-year history.

“The university will become a place that exemplifies the scholarship and the practice of reconciliation, forgiveness and social justice,” Jansen said in the inaugural lecture. “Scholars and students from around the world will descend on the institution to study and understand the theory and practice of building a community across the divides of race but also religion, gender, disability and ability, national origins and … sexual identity.”

Since September last year conversations with students on race helped kick-start the work the institute planned to do, its interim director, John Samuel, said at last week’s launch. The institute would provide a critical space where public discussion, community engagement and teaching would be integrated to find solutions to the complex work of social transformation in the country.

Some students feel the institute shouldn’t just focus on race but bring different groups on campus under the same roof to engage on topics as diverse as sport or music. “We need to get people talking about things other than race all the time,” said Lerothodi Molete, a second-year BSc soil sciences student.

His friend, Anthony Fourie, who is studying chemistry, was more worried about the separation of Afrikaans and English lectures, saying he hoped the newly launched institute would address the difficulties that arrangement caused. “We can’t do away with Afrikaans lectures because that would cause a war on campus, but we have to make a plan on how to get black and white students together,” he said.

Both students said the integration of residences was not really working because students were still separated in their dormitories. They suggested the institute put students together and watch what happens, “like a science experiment where you put two chemicals together and watch the reaction”, Molete said.

It was this kind of thinking that impressed Allan Boesak, the institute’s theologian in residence, he said last week. The last time he was this excited by the vibrancy of young people was in the 1980s, Boesak said.

Boesak and veteran anti-apartheid activist Jay Naidoo participated in the conversations held with students in the run-up to the launch of the institute. They are to be collated and published so they reach a wider audience, Samuel said.

The conversation would continue later this year with religious leaders in Bloemfontein and a multidisciplinary study focusing on race would commence, Samuel said. “There is still a lot of hurt that needs to be addressed,” he said.

The former Reitz residence, which was closed when the scandal emerged and has since been reopened, is diagonally opposite the institute’s offices. Samuel said it was symbolic of why the institute was created: “It reminds us of our job every time we come to work.”

Hlonipa Matshamba, a BCom student, wants the institute to help eradicate the awareness of skin colour on campus. Other student concerns such as class attendance, pass and graduation rates and safety on campus are also important, she said.

At the launch Jansen expressed concern about who would take the baton from such a moral compass as Tutu. “I fear for the day that you are no longer here and the humility you express is no longer here,” he said, thanking Tutu for accepting UFS’s invitation.

Some UFS students appeared to have an answer for Jansen: “All citizens have to take the baton from Tutu,” said Fourie. To which his friend Molete added: “We are past the stage where we have to wait for someone to liberate us. We all have to take responsibility.”

Matshamba thought the UFS’s management deserved credit for its initiative in honouring Tutu. “After all that he has done for the country as well as what he has gone through and taught us, he deserves to be honoured. I was impressed,” she said.