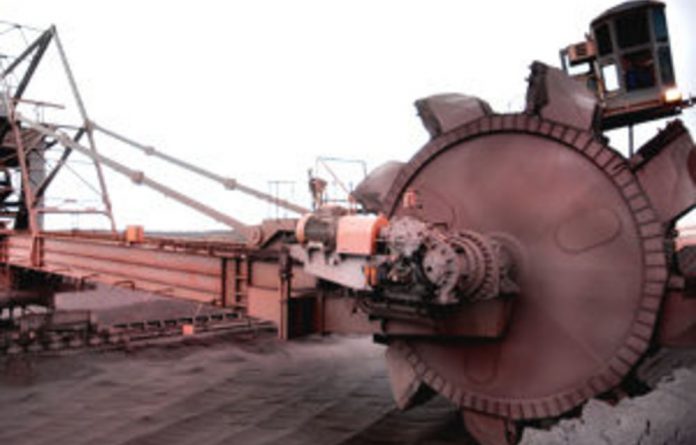 The giant hole at Sishen in the Northern Cape is in the news again, as mineral resources department director general Sandile Nogxina spelled out in a lengthy replying affidavit why the department thought Kumba, which owns 78,6% of the mine at Sishen, should not be granted the right to mine the other 21,4%.

There are 17 files of about four megabytes each, so unless you are a lawyer involved in the case, or a hapless journalist tasked with following the minutiae, stay away. This case, in fact, has no end to minutiae, which Nogxina takes us through in mind-numbing detail. But then this is hardly surprising, because the case is worth billions.

The key squabble is that Nogxina believes that Kumba does not have the right to the other 21,4% of what is one of the world’s largest and richest iron-ore mines. He claims that Kumba committed fraud by putting in its application ahead of time but arranging with the department to have it date-stamped a few days later. That renders its application void, he says, leaving Imperial Crown Trading (ICT) in the driving seat.

But Kumba’s own court documents allege that ICT’s application is not much more than a photostat of its own application. It is understood that it has laid charges with the Hawks as required by the Prevention of Corruption Act. This leaves the possibility that both applications will be challenged, leaving me to come to the conclusion that I shall put in my own application for the 21,4% right.

I have discussed the matter with colleagues, who seem to think this is a good idea. One offered to be my BEE partner. If we include her family, we can even claim that we are broad-based. Nogxina’s affidavit gives me a good idea of what I will be acquiring. Notice that I do not use the word “buying” as, if I get it right, I will have to do little more than pay an application fee of R500.

Success will mean that I get 21,4% of a large, fully functioning and well-managed mine that can’t meet demand for its product. On Nogxina’s numbers, I can expect after-tax profit of R1-billion a year, my slice of the operation being worth R14,7-billion based on a price:earnings ratio of 13.

This is a pretty good deal, because I won’t actually have to mine. That’s a good thing, as I don’t know how to mine or run a mine. I am sure, though, that I will check out my property from time to time on Google Earth. I will also watch my bank account to make sure that the money keeps flowing in.

Crossing swords
I imagine, though, that I will soon be crossing swords with government. According to Nogxina’s affidavit, international demand for iron ore sharply exceeds supply. As such, I’ll want to export, baby, export. But government will want me to supply my iron ore cheaply to ArcelorMittal so that it can overcharge us in the domestic market for steel. This is because of government policy giving it cheap iron ore so that it could give us cheap steel. Hah!

One of the first things that would happen is that I’d be swamped by requests from ArcelorMittal and Kumba to buy me out. When ArcelorMittal failed to apply to convert its old-order mining rights in one of the greatest examples of a business being asleep on the job in corporate history, its supply agreement with Kumba was worth R5-billion a year.

We already know that ArcelorMittal believes that the mining rights at Sishen are worth R800-million — to be paid to ICT if it pulls off. I’d probably need more than this. Nogxina’s affidavit says that ArcelorMittal’s share price fell 37% after the supply agreement was torn up by Kumba.

I could help it get its value back, but would also need a BEE deal like the one ICT luminaries Duduzane and Co have with a headline value of R9-billion.

The R9-billion would be enough for me, but then I also have to think of my broad-based BEE partners. If you think as a white South African I should not be entitled to participate in a BEE deal, I have just two words for you: Atul Gupta.

What would Kumba pay to buy me out? By Nogxina’s reckoning, Kumba is rolling in money, contributing 37% — $1,47-billion — to Anglo’s operating profit. This is 86% of the operating profit derived from Anglo’s iron-ore and manganese businesses globally. Nogxina says that the 21,4% share “which Kumba now claims as its own”, amounts to an additional R1-billion after tax a year for Kumba.

No knowledge
Nogxina is peeved about this, as you think he might be, saying that many of its shareholders are not even South African. He says Kumba “reigns supreme over this vast resource” and aims to take over the extra portion of the mine at the cost of an application fee. Well, so do I.

We know that Kumba came to make its application because it figured that its partner, ArcelorMittal, had not noticed that the deadline to renew its mining licence was fast approaching.

Along with most South Africans I also had no knowledge of this. If we’d all known, there would have been a flood of applications. It would have been called an auction or a tender. The R9-billion question, though, is how did ICT know? Let’s pause for a moment here. The old-order rights expired on April 30 2009, a Thursday. May 1 2009 was both the first day of the new regime and a holiday.

Kumba arranged — fraudulently in Nogxina’s view — to hand in its application on the Thursday, but for it to be date-stamped on the Monday. Kumba claims in its court documents that its application was photostated over the weekend and appeared under ICT’s name on Monday May 4 2009.

As both applications had purportedly been received on the same day and ICT was adjudged to have better BEE credentials (even though it then had just three shareholders), it was awarded the 21,4% rights.

I mailed Nogxina to say that it appeared that neither the Kumba and ICT applications would succeed and, as such, if I put in my own application, could I become the owner of ArcelorMittal’s former interest in Sishen? His reply: “Please refer to the text of the MRPDA [Mineral Resources and Petroleum Development Act] and read the affidavit in the context thereof. I cannot provide legal opinions ‘on demand’ on the provisions of the MRPDA.”

I was somewhat disappointed. As his affidavit tells us, he is the author of this mess that masquerades as law.

Correction
Previously this article incorrectly reported that Atul Gupta and Duduzane Zuma are shareholders in Imperial Crown Trading. Their shareholding is in Ayigobi, which has concluded a BEE deal with ArcelorMittal. The error is regretted.

Given South Africa’s leadership role, it’s an ideal location for the Secretary to deliver a speech announcing and describing the US strategy toward sub-Saharan Africa
Advertising