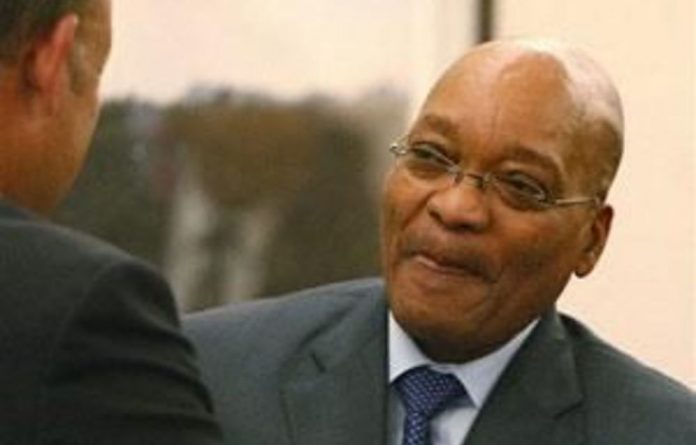 “We urge every sector and every business entity, regardless of size, to focus on job creation. Every contribution counts in this national effort,” Zuma said in his State of the Nation address to Parliament on Thursday.

Economists have been worried that his government is going down the wrong path by relying too heavily on the state to create work over the private sector while a presidential report said four major labour reform Bills his administration proposed could cause millions to lose their jobs.

Zuma reached out to the private sector and announced R20-billion in tax allowances to promote investment and expansion in the manufacturing sector.

“We cannot create these jobs alone. We have to work with business, labour and the community constituencies,” Zuma said.

He also said in the major policy speech he took to heart a soaring rand currency that has dealt a blow to exporters. Zuma said the country’s budget deficit is expected to shrink to 3% to 4% by 2013 from the current 6,7%.

Zuma said the state-run Industrial Development Corporation has set aside R10-billion to invest in areas that have high potential to create jobs.

He also proposed creating a R9-billion fund to reduce unemployment and find jobs for youth in the country where more than half of those under 24 are jobless and the overall unemployment rate has lingered at about 20% to 25% for years.

But the ANC has allocated billions of dollars over the years for job training only to find the money lost to inefficiency and corruption, with few economists expecting the latest plan to do little more than swell state spending.

The labour reforms, job fund and his administration’s new growth path, which calls on government initiatives to create five million jobs by 2020, have been aimed at pleasing the powerful Congress of South African Trade Unions.

Zuma has been backing a labour-friendly agenda ahead of local elections he said would be held before the end of May, trying to avoid any friction with Cosatu, which has used its two million members as a powerful vote gathering machine for the ANC.

“A lot of these measures are only going to make things worse,” said Gary van Staden, a political analyst with NKC Independent Economists.

Mandela ‘is not young anymore’
Zuma said former South African president Nelson Mandela was comfortable and receiving good care after being hospitalised for a respiratory infection.

“We need to accept the reality that president Mandela — who is loved by all of us, young and old, men and women, black and white — is not young anymore,” Zuma said.

Mandela (92) South Africa’s first black president, was hospitalised a fortnight ago raising fears over his health.

The hospitalisation created a media frenzy and Zuma called on South Africans to give Mandela more privacy during his treatment.

“We want to assure the nation that Madiba is receiving very good medical care, and is comfortable,” Zuma said.

Zuma also said government was pleased with the performance of the country’s financial sector.

“It has proven to be remarkably resilient in the face of the recent financial crisis and the global economic meltdown,” he said.

Zuma also said concerns about the exchange rate had been taken to heart.

“Exchange control reforms that were announced in the medium term budget policy statement last year are being implemented. Further information will be provided by the Minister of Finance in the Budget speech,” Zuma said in his address.

R800m relief for flood victims
Zuma said the government had set aside R800-million for immediate relief to assist communities affected by the recent floods in the north of the country.

“We extend heartfelt condolences to the families of those who lost their lives. Our hearts also go out to those who were injured and who lost all their belongings.

“Let me use this opportunity to announce that government has set aside R800-million for immediate relief to assist communities.”

Funds would also be earmarked to deal with post-disaster recovery and reconstruction in the years ahead.