Leopard pelt trader gets off scot-free 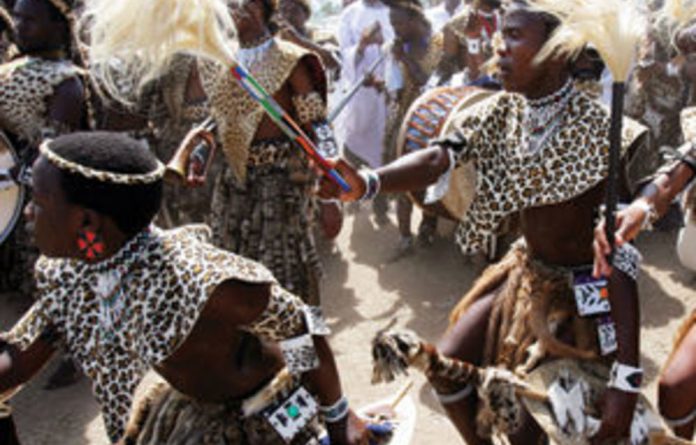 Conservationists are infuriated that a KwaZulu-Natal muti trader caught in possession of 150 leopard pelts has been let off the hook. Figures indicate that, at most, 450 of the endangered cats are left in the province.

And, after it emerged that the trader supplies ceremonial regalia to members of the Shembe church, differences have emerged over who is entitled to wear the spotted skins. Mlungu Ngubane was charged with 252 offences under the KwaZulu-Natal Nature Conservation Ordinance after police raided his Maputaland home in August 2008.

In addition to 92 leopard skins, they said they found parts of several other protected game species and a container of Temik, a toxic pesticide they believed was used to kill wildlife.

This was not Ngubane’s first run-in with the law. In late 2007 he was convicted of the illegal possession of 58 leopard skins and was given a suspended sentence and community service. When his case came to court in late January after several delays, magistrate Paul David ruled the police did not have a warrant to search his premises and threw it out.

Conservation NGOs that became aware of the ruling only this week said it was based on a flimsy technicality. They suspected political pressure because Ngubane tailors leopard skins into the traditional outfits worn by Shembe believers.

“After his first conviction, the church asked that Ngubane be allowed to do community service rather than go to jail on condition that he was not caught again. He continued trading in spite of this,” said Rynette Coetzee, of the Endangered Wildlife Trust’s law and policy programme.

The Shembes
Tristan Dickerson, a scientist working with the Munyawana Leopard Project in northern KwaZulu-Natal, pointed out that leopards are listed as threatened and are protected under Appendix I of the Convention on International Trade in Endangered Species.

Asked to do DNA analysis on Ngubane’s skins, he discovered they were going to the Shembes. He attended several Shembe events, where he saw more than 2 000 members wearing real leopard skins.

“Leopard skin represents royalty and everyone wants to feel like royalty,” said Bandile Mkhize, the chief executive of the regional authority, Ezemvelo KZN Wildlife. “Before we know it, there won’t be any animals left. We can’t allow a free-for-all.”

Kings and chiefs, including President Jacob Zuma, were required to follow certain procedures and obtain permits if they wanted to wear the pelts of protected species, Mkhize said. His organisation had issued 15 such permits for a ceremony last December.

But although Zulu royalty appeared happy to follow the rules — King Goodwill Zwelethini gets the crane feathers for his headdress from conservation organisations — Ngubane was supplying the Shembes illegally. “He certainly didn’t get any permits from us,” said Mkhize.

A ceremonial outfit made of leopard skin, which includes an apron, headdress and armbands, costs more than R6 000. Zulu royal spokesperson Prince Mbonisi said the leopard skins date back to the 1960s and it is impossible to source new ones. “There are no markets where you can buy leopard skins. Ask the Shembe; they wear them all the time,” he said.

Pointing fingers
Presidential spokesperson Zanele Mngadi could not say where the Zuma household sources ceremonial leopard regalia, saying that they could be fake. She failed to answer further questions.

Enoch Mthembu, the spokesperson for the Shembe church, saw nothing wrong with Ngubane supplying church members. “God gave us the environment and control over the animals. We wear leopard skins to worship God, not to enrich ourselves,” he said.

The Shembes wear leopard regalia for dancing ceremonies, not for traditional purposes in the manner of Zulu nobility, he said. “It’s wrong to point fingers at the Shembe; this is part of our culture.”

The religion, with an estimated 4,5-million followers, was based on reverence for nature and used various animal skins for positive, peaceful purposes, Mthembu said. They were sourced from all over the continent.

Asked about the risk that leopards could become extinct, Mthembu replied that stock owners in Port Elizabeth were complaining the cats were killing their livestock.

The paradox of customary marriages