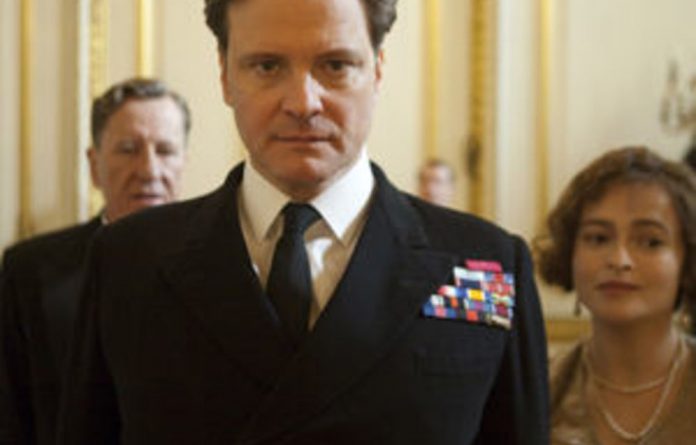 Some films are known as “game-changers”. The King’s Speech is not one of those films. It is a don’t-change-the-game-er, or yet a jolly-well-change-it-back-er: a traditionally mounted, handsomely furnished British period movie, available at a cinema near you in dead-level 2D.

Set in the 1920s and 1930s, it is populated by that sort of well-suited patrician Englishman of yesteryear who drinks spirits in the middle of the day, whose middle and index fingers are rarely to be seen without an elegant cigarette interposed and who pronounces the word “promise” as “plwomise” (try it).

Written by David Seidler and directed by Tom Hooper, The King’s Speech is a richly enjoyable, instantly absorbing true-life drama about the morganatic bromance between introverted stammerer King George VI and his exuberant Australian speech therapist Lionel Logue — an affair brokered by George’s shrewd wife in her pre-Queen Mum incarnations as the Duchess of York and then Queen Elizabeth.

These characters are performed with pure theatrical gusto by Colin Firth as the miserably afflicted monarch, Geoffrey Rush as the twinkly-eyed speech coach and Helena Bonham Carter as the queen who has to learn to like Logue by overcoming her own snobbery — which she incidentally never troubles to disguise as shyness.
As well as this, the movie is an intriguing, if slightly loaded, new perspective on the abdication crisis of 1936.

Above all, it’s a smart anti-Pygmalion. Like George Bernard Shaw’s Eliza Doolittle, the poor king as a younger man is forced to speak with his mouth full of marbles and comes close to Eliza’s fate of swallowing one.

But where she had to smarten up and talk proper, George VI (formerly the Duke of York, always known as “Bertie”) has to move in the other direction: he has to loosen up, be less formal, less clenched, less clinically depressed. The movie cleverly casts a new light on the dysfunctional tremor at the heart of Britain’s royal family and cheekily suggests there was a time when a British monarch experimented with psychoanalysis, though disguised as speech therapy.

‘Winter of our discontent’
Rush’s Logue is a bullish Australian with bohemian manners and shabby premises on Harley Street. He is a failed actor who is everywhere patronised as a colonial, especially by the toffee-nosed English theatrical types for whom he still hopefully auditions. We see him trying out for an amateur company by doing Richard III’s “winter of our discontent” soliloquy. (Might Hooper and Seidler have considered making Logue do the “popinjay” speech by Hotspur from Henry IV Part I? Hotspur is the Shakespeare character traditionally played as a stammerer. Too obvious?)

In his script Seidler creates sharp exchanges as Logue fearlessly barges through the pompous royal formality that is part of the problem, cheerfully deriding his previous medical advisers: “They’re all idiots!” “They’ve been knighted!” splutters Bertie. “Makes it official then, doesn’t it?”

King Edward’s abdication means poor, stuttering Bertie has to shoulder the ultimate burden while “Herr Hitler” is whipping up the storm clouds of war. The nation needs a king who can rally the forces of good in a clear, inspiring voice. Are Bertie and Lionel up to the job?

As well as the three leads, there are two tremendous supporting turns. Guy Pearce is a terrific Edward, the smooth, obnoxious bully who mocks Bertie’s stammer and, marooned in Sandringham, yearns for phone sex with his beloved Wallis Simpson — what he ickily calls “making our own drowsies”. Michael Gambon has two great scenes as George V: first as the robust patriarch, barking orders at his quailing son, and then (the sudden decline is a modest coup de cinema) incapable and on the verge of dementia, mumbling and maundering as his privy councillors make him sign away his executive responsibility.

Not everyone’s going to like this film: some may find it excessively royalist and may, understandably, feel that it skates rather too tactfully over Bertie and Elizabeth’s initial enthusiasm for appeasement and Prime Minister Neville Chamberlain. In this version Chamberlain hardly features at all — we appear to pass directly from Stanley Baldwin’s resignation as PM to the sudden appearance of First Lord of the Admiralty, Winston Churchill, jowl-quiveringly, sinew-stiffeningly played by Timothy Spall — always giving advice and apparently permitted to wield a lit cigar in the sovereign’s presence.