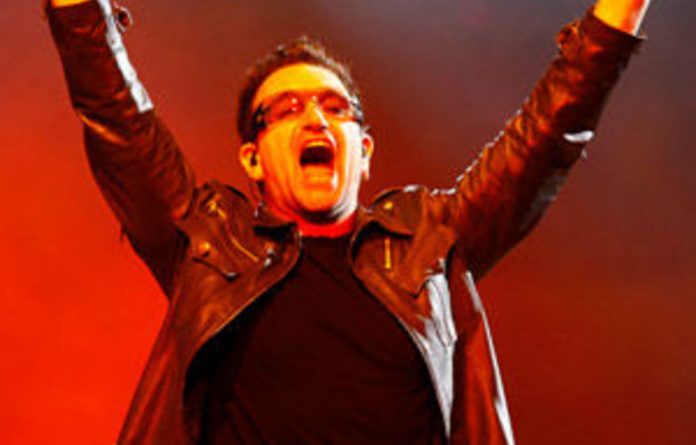 How do you start a feature on U2, the biggest band in the world? A band who said they weren’t sure there was any point to creating U2.com because their fans have created hundreds — if not thousands — times more content than they ever could. You could begin by commenting on their lead singer’s possibly ego-driven involvement in politics. You could note the band’s recent travails regarding musical theatre.

You could lambast — or praise — their current musical output (for the record, like every one else I knew then, I pogo’ed my little Doc Marten boots to Sunday Bloody Sunday, and put With Or Without You on a mix-tape, but now incline far more to the post-modern semiotic shenanigans of the Zoo TV era than U2’s rock output and — typical music journalist — still have a vague eye out for their side-project soundtrack to Clockwork Orange). Alternatively, you could start with a snide comment on grown men who still roll under their teenage nicknames, or level more pointed criticism at the group’s involvement in high-fashion campaigns that seems lives and worlds away from the poverty they purport to try and alleviate.

Or, instead, you could start with what all South African readers truly want to know, but can’t find out, and report that Bono says his friend Nelson Mandela “is doing really well”. You could note that U2 went on to say that they probably won’t get to see Madiba as they refuse to be “a visit the great man feels he has to take”. You could also report that U2 mentioned casually that Desmond Tutu keeps in touch with all the One campaign ambassadors via his iPad. Yes, “the Bish”, rocks an iPad! Also, Tutu apparently often makes jokes about Bono needing to do something “or he won’t get into heaven” — a subject about which, arguably, the former Archbishop has more insider knowledge than a certain national president.

Perhaps it would be best to start by noting a moment in the conversation when Southern Sudan is discussed, and Paul McGuiness (the band’s manager and most certainly deserving of the title of being the fifth member of U2) pipes up to mention to Bono that a friend of his from the World Bank has been appointed to the newest country in the world, and wants to chat to the singer about “a few things”.

What is it like to have an hour-long dinner with U2? Not a dinner like you have with friends, obviously, but a dinner the band’s record label, Universal, and their publicists pulled strings and cajoled favours to bring to fruition because, quite obviously, a rock group that’s sold over 150 million CDs and records, hardly needs five South African journalists to write nice things about them and get more bums on the Soccer City seats. In a word, the members of U2 are probably best described as “urbane”.

Multi-national conglomerate
An audience with these 22-time Grammy winners is more like a chat with the international vice president of a multi-national conglomerate than the kind of music-focused discussion with an international jazz giant or a globe-hoping DJ. There, the art or the party tends to be the focus of discussion. With U2, it’s about the grander project of who they are, and what they’re doing. It’s about the implications of the global machine they steer, and about thinking of new ways to reach their massive fanbase (7,2 million official fans on Facebook, by way of illustration) — and of how to create truly great experiences for them.

Not to say that music doesn’t feature — there’s a lengthy chat about the merits of vinyl vs CD, and the implications of the iPod generation on songwriting and albums; there’s discussion about Amadou and Mariam, about which album a particular Bob Dylan song is from, about Elvis and the black origins of rock ‘n roll, about the time Patti Smith sent U2 an email saying, “I’ve always dreamed about playing at Madison Square Gardens and, unless you invite me, I never will.” There’s also discussion about how Jay-Z is getting really interested in rock and roll and about how important Chuck D was, and still is, about what it’s like working with Brian Eno and Daniel Lanois, and about some work U2 has done with DangerMouse. “Will it be on a new album?” the journalists chorus. “Maybe,” shrugs Edge. “We’ll see,” says Adam Clayton.

The experience is surreal too — every once in a while you need to remind yourself that this isn’t a documentary about the superstars that you’re watching — it’s supper and you need to pass the plates and also ask questions. That sense of everything being larger than life isn’t helped by the fact that, even from the fourth floor hospitality suite at Soccer City, “the Claw” towers higher than the windows outside — a massive metal spider that dominates what normally looks like a huge soccer field. It’s there, in all its hulking technological glory, purely because the four guys tucking into fish and salads had a dream about playing in a band in 1976.

Happily, the dinner is not just about the 50-metre high speaker-stacks or how long it took to record and produce No Line On The Horizon, but also has some all too human moments. Like Adam Clayton saying that, of course, stepping onto the biggest tour stage ever built is incredible, but also “it’s a bit like going to the office, you know, even if the office does look like a giant Transformer”.

It’s about them all pondering when asked who they’d most like to collaborate with, living or dead, and Edge piping up after Bono’s spoken about dreaming of singing with John Lennon “or, even, just holding the man’s microphone”. It was weird, Edge said, to see a picture of himself in the latest issue of Spin magazine, which he bought while away on a trip to New York, and to realise it was taken the day after Lennon was shot. “Was the article about John Lennon?” asks Bono. “No,” says Edge, “I think it might have been about me, but I was just struck by where we were on that day.”

Amadou and Mariam
Adam Clayton ventured that he’d really like to work with Amadou and Mariam and, who knows, since they’re playing support on the South African tour, it might even happen. Larry Mullen — who speaks very little during such interviews — contributed a splendid answer, recalling Keith Richards’s quotable quote that he was happy to be there, “Hell, happy to be anywhere”. Cue five journalist’s pens, dutifully preparing to tell the world “U2 drummer seeks Rolling Stones collab.”

Bono steps in as de facto interpreter, suggesting that Larry means he’d be happy to collaborate with anyone. It’s a marvellous moment as a grin breaks from ear to ear and one of modern pop-rock’s most recognisable drummers smiles for all the world like an eager school-child. Here’s a man who only takes the talking stick once during the dinner — becoming animated about the difficulties U2 faces back home with the perception that they were part of Ireland’s boom-time, but are now absent during the country’s woes — admitting that, man, all he really wants to do is play the drums in a rock ‘n roll band.

At the end of it all — after Bono’s comment about how what gets U2 up every morning is a fear of failure and the need to strive to be more than just “very good”, but to actually get it right to be great; after Edge and Adam Clayton joking that their first job was on a building site and, with their project to help rebuild New Orleans, they’re still involved in that; after Paul McGuiness has admitted that he probably said something crass, decades ago, when the band first encountered criticisms about their Christian faith in a world of the devil’s rock ‘n roll (“I think I said that if God had a problem with our tour, He should have raised it at the planning meeting”) and after Bono has explained why Sunday Bloody Sunday starts with “this is not a rebel song” (he was concerned that the Sinn Fein “rebel” movement had moved to adopt the song as an anthem) and the band have asked about South African hip-hop, the latest news from Egypt and about how other concerts have been doing locally… After all that, the biggest band in the world, stand up, shrug as they say they’d best be going because the media manager has called home, and politely thank the five South African writers for spending time with them.

There’s a hurried snap or two with Bono, and then they’re gone. There’s still a charge in the room though, something that’s greater than just the sum of four musicians’ vision and almost four decades of hits, and it persists even as the suite becomes just another room with table of plates and glasses and cutlery.

Evan Milton was one of five South African journalists hosted for an hour-long dinner interview with U2 on Friday before they launched the South African leg of their international “360° Tour” tour.