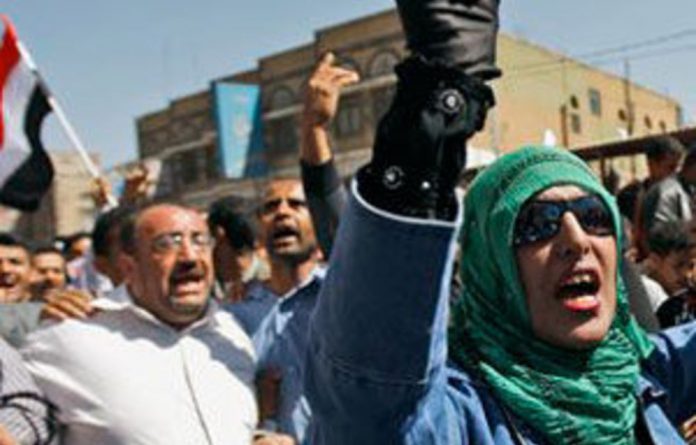 Clashes between police and protesters also broke out Monday in the city of Taez, south of Sana’a, where thousands of people joined demonstrations against Saleh, witnesses there said.

In Sana’a, about 3 000 protesters marched from Sana’a University towards al-Tahrir square in the centre of the capital demanding that Saleh, who has been in power for 32 years, step down, an Agence France-Presse reporter said.

City streets around the square echoed to chants of “After Mubarak, Ali,” referring to the ouster of Egypt’s Hosni Mubarak, who quit after 18 days of protests by hundreds of thousands of Egyptians centred on Cairo’s main square, also named Tahrir.

Shouts of “No corruption after today,” reverberated through the narrow streets, while some demonstrators brandished banners reading: “The people want to oust the regime” — slogans used by protesters in Egypt.

As the protesters got near the square, baton-wielding riot police moved in and clashes broke out, witnesses said.

Stones hurled
Despite razor wire erected by security forces around the square, supporters of Saleh, who have been camped at the square for days to thwart anti-regime demonstrations, waded in to the demonstrators with batons, witnesses said.

The protesters responded by hurling stones at Saleh’s supporters.

Witnesses said some of the demonstrators were slightly injured.

A BBC journalist, Abdullah Ghorab, whose face was covered with blood, said he was beaten “by men from the ruling party”.

In the Taez clashes, witnesses said that at least eight demonstrators were hurt.

Sana’a has been the scene of near-daily protests since January and last week supporters of the president took over Tahrir Square, erecting tents to try to thwart the protesters.

Protests have become increasingly violent, and on Sunday riot police used batons to disperse a demonstration by an estimated 2 000 demonstrators in Sana’a, injuring a woman and making 10 arrests, according to witnesses.

Elected to a seven-year term in September 2006, Saleh has urged the opposition to resume dialogue aimed at forging a government of national unity.

The parliamentary opposition, grouped in an alliance known as the Common Forum which has previously led the protests, has suspended its participation in demonstrations after deciding to enter talks with the government.

The Common Forum said on Sunday it is “ready to sign a framework agreement this week … on [resuming] the national dialogue”.

In a statement, the GPC said it “welcomes the Common Forum’s consent to what came in the [Saleh’s] initiative” over resuming talks, freezing constitutional amendments and postponing elections.

Criticism
New York-based Human Rights Watch (HRW), meanwhile, on Monday criticised what it termed the government’s use of force in dispersing the protests.

“The government needs to take full responsibility for this abuse.”

According to the rights group, “dozens of pro-government thugs … arrived and attacked the demonstrators” on Sunday using “batons, military assault rifles, and tear-gas guns.”

“Members of the security forces used batons to beat at least 20 demonstrators on their heads and backs, and beat and kicked others. They attacked two demonstrators with electro-shock tasers,” witnesses were quoted as saying. — AFP