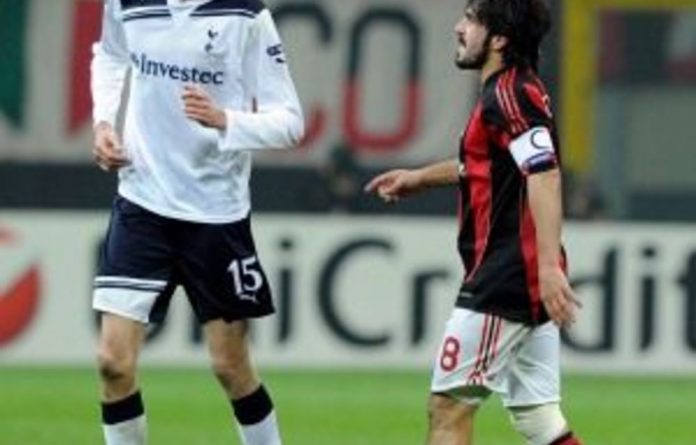 Tottenham shocked seven-times European champions AC Milan 1-0 at the San Siro on Tuesday with Peter Crouch firing the only goal on a superb night for the north Londoners.

Spurs, who had lost by the odd goal in seven to holders Inter Milan in an extraordinary group phase encounter at the same venue, had to make do without that night’s hat-trick hero Gareth Bale owing to injury.

But even in his absence Spurs turned in a supremely professional showing which belied the fact this is their first season of Champions League fare.

After ensuring they kept things tight at the back — remembering the lesson of their nightmare opening half against Inter, Harry Redknapp’s side geared themselves for a rapier strike and Crouch was on hand to fire home after a brilliant surging run by Aaron Lennon 10 minutes from time.

The win means the English Premier League outfit will be favourites to finish the Italians off at White Hart Lane in three weeks time.

“What a performance from us. We stood tall to a man, Sandro, Steven Pienaar, Michael Dawson, Heurelho Gomes … I could go on,” said a proud Redknapp.

‘Too afraid’
“I said to the lads, too, at half time to get it to Aaron Lennon whenever we could because he tore the left-back apart all night — and his role in the goal was fantastic. It’s a great night for the fans and a great night for Tottenham,” Redknapp added.

“In the first half we were too afraid to go forward, it was difficult to play in such tight spaces and we made many mistakes,” he admitted.

Milan may be the Serie A leaders but they had precious little penetration when push came to shove — although Zlatan Ibrahimovic did put the ball in the net with an acrobatic volley only to have his effort ruled out for a marginal offside.

Poachers finish
In the day’s other match, Valencia were frustrated as former Real Madrid striker Raul, who scored against them in the 2000 final, came back to haunt his countrymen.

Raul ended 16 years at the Bernabeu last summer and joined Germany’s Schalke — and although another Real Madrid man Roberto Soldado put the hosts ahead, Raul bagged the equaliser for a record 71st European goal in a 1-1 draw at the Mestalla stadium.

But 33-year-old Raul equalised on 64 minutes with a typical poacher’s finish for a potentially crucial away goal.

Raul is the all-time top-scorer in Champions League history and his 69th goal in the competition hands Schalke the advantage for the second leg in Gelsenkirchen on March 9.

“We knew they were dangerous and had quality players in attack,” said Soldado. “You can’t give Raul a metre, if he has a chance he does what he did to us.

But Raul found his shooting instincts had not deserted him as he cushioned a pass from Jose Jurado, then spun and slid a left-footed shot into the corner for the equaliser.

On Wednesday, Arsenal host Barcelona, who destroyed them last season thanks to Lionel Messi’s four-goal salvo, while Roma take on Shakhtar Donetsk.

Then next week, Chelsea travel to FC Copenhagen, while Real Madrid — their last title coming in 2002 in Raul’s heyday — head to Lyon before Marseille host Manchester United and holders Inter Milan meet Bayern Munich, their victims in last season’s final, to complete the last 16 action on February 23. — Sapa-AFP