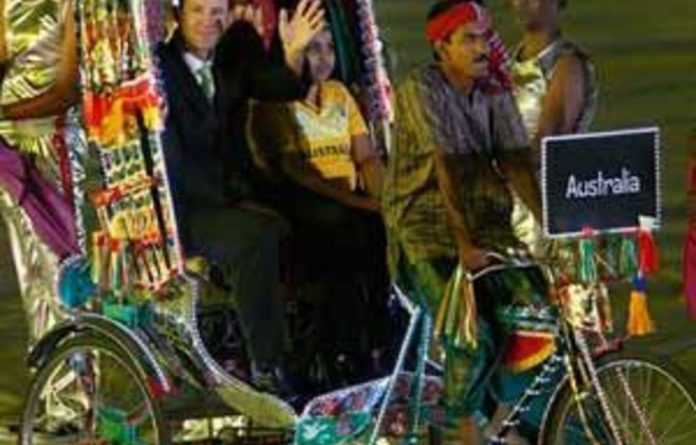 The 10th cricket World Cup opened in a blaze of colour on Thursday, launching a gruelling 49-match, six-week sporting marathon that promises to be the most open for years.

Ricky Ponting, skipper of defending champions Australia, led the sparkling three-wheeled procession at the start of the event, showcasing the culture of the three host nations — India, Bangladesh and Sri Lanka.

“I hope that the games will be memorable and exciting,” said Sheikh Hasina.

“It gives me great pleasure to declare the 2011 ICC Cricket World Cup open.”

Favourites India will go into the tournament opener against Bangladesh on Saturday in Dhaka in buoyant mood after two wins in their warm-up matches, including a crushing 117-run victory on Wednesday over New Zealand.

“Every team has a chance”
“I believe every team taking part has a chance to win, it is all very open,” South African skipper Graeme Smith said as all 14 captains gathered ahead of the opening ceremony.

Indian captain Mahendra Singh Dhoni defended the exhausting schedule which culminates in the final at Mumbai on April 2.

“All teams are in good touch. The gap between matches will help players recover from niggles which are bound to happen. It means every team will be in good shape,” he said.

Pakistan are sweating over the form and fitness of bowling spearhead Shoaib Akhtar, who is part of a pace attack already depleted by the absence of banned duo Mohammad Aamer and Mohammad Asif.

“These are normal procedures and players from every team will be tested,” Alam said.

Akhtar, recalled for the World Cup after being out of action for most of the past three years due to a spate of injuries, tested positive for a banned drug nandrolone in 2006.

There was further trouble for Akhtar after he and fellow paceman Wahab Riaz were fined 3 000 Bangladeshi taka ($42) each for returning late from a private dinner on Wednesday night.

Warm-up match
Pakistan face England in the final warm-up match in Fatullah on Friday, a game the ageing Akhtar needs to perform in to make the team for their opener against Kenya on February 23.

England fast bowler Stuart Broad admitted he was keeping his distance from Pakistan as the teams prepared for their first meeting since the ‘spot-fixing’ scandal that rocked cricket and led to bans for three Pakistan players, including Aamer and Asif.

“We’ve not seen a huge amount of them in the hotel – we’ve not been going out for dinner with them particularly,” Broad told reporters.

“Obviously it was a tough summer for us last year, all England players will say the same.”

Meanwhile, international cricket chiefs have approved Tinashe Panyangara as a replacement for the injured Edward Rainsford in the Zimbabwe squad.

Rainsford is the eighth player to be replaced after compatriots Tinotenda Mawoyo and Sean Ervine, Australia’s Nathan Hauritz and Michael Hussey, Praveen Kumar of India, England’s Eoin Morgan and Sohail Tanveer of Pakistan.

“Both players are struggling with hamstring injuries and had scans. The outlook is not good. If replacements are required they will be named in the next few days,” a West Indies spokesperson told the cricinfo website. — Sapa-AFP