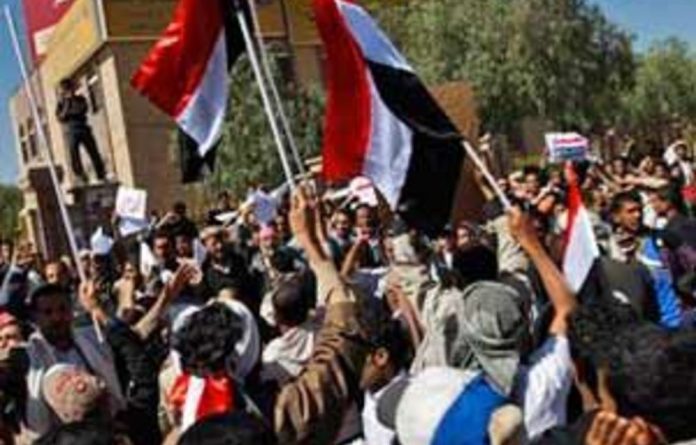 Yemeni police opened fire Thursday on a crowd of protesters shot and injured six people on Thursday evening trying to break up a demonstration in the southern port city of Aden and another 25 people were wounded in violent clashes between pro- and anti-regime demonstrators in the capital city of Sanaa.

Thousands of people marched in Aden’s Al-Mansura neighborhood demanding President Ali Abdullah Saleh quit but they were dispersed by police who opened fire. Six protesters were hit and wounded, according to medical sources.

An Agence France-Presse (AFP) reporter said tensions between demonstrators and police remained high in the tightly patrolled city which has been rocked by violent clashes for two days in a row.

Twenty people were wounded and a similar number were arrested on Wednesday when demonstrators stormed Al-Mansura police station and the central prison, according to a local official.

“The police intervened only when the protests turned violent,” he said.

Saleh ordered the set up of an “investigative committee to inquire about the unfortunate riots that have occurred in some parts of” Al-Mansura, state news agency Saba reported on Thursday.

In the capital, on the fifth day of student-led demonstrations against the veteran leader, about 2 000 demonstrators were attacked by regime backers as they left Sanaa University’s campus.

The protesters, chanting “The people want to overthrow the regime,” responded by hurling stones.

Police intervention
Police intervened with warning shots to separate the two sides, but later withdrew, as the protesters came under fire from Saleh supporters, a journalist in Sanaa said.

Fifteen of the injured were protesters and the rest were supporters of the regime, he said.

A stone hit an AFP photographer, injuring his head, while regime loyalists beat up an AFP videographer.

In Sanaa, protests have becoming increasingly violent, despite Saleh — elected to a seven-year-term in September 2006 — urging dialogue on forming a government of national unity.

In Taez, south of Sanaa, protests continued for a sixth day as demonstrators carrying “Leave Ali” banners set up tents at a road intersection near Al-Huraish Square after police chased them away.

The protesters have called for a “Day of Rage” on Friday, with the authorities in Taez reacting with a heavy deployment of Republican Guard forces and the army.

In Ibb, southwest of Sanaa, hundreds of protesters took to the streets on Thursday demanding that Saleh step down.

Anger at rampant corruption has helped to fuel unrest in Yemen, the poorest country in the Arab world.

Separately, thousands of supporters of the Southern Movement staged protests in several southern cities calling for the secession of the formerly independent South of Yemen, witnesses said.

In the town of Daleh, hundreds took to the streets to mark “the prisoner’s day” which falls on every Thursday. A similar demonstration took place in the town of Habilayn, which has been under tight army control since December.

Similar protests took place in Loder in Abyan and Azan in Shabwa, calling for “disengagement.”

Besides poverty and unemployment, Saleh’s government is grappling a secessionist movement in the south, rebellion in the north, and a regrouping of Al-Qaeda on its soil. — AFP