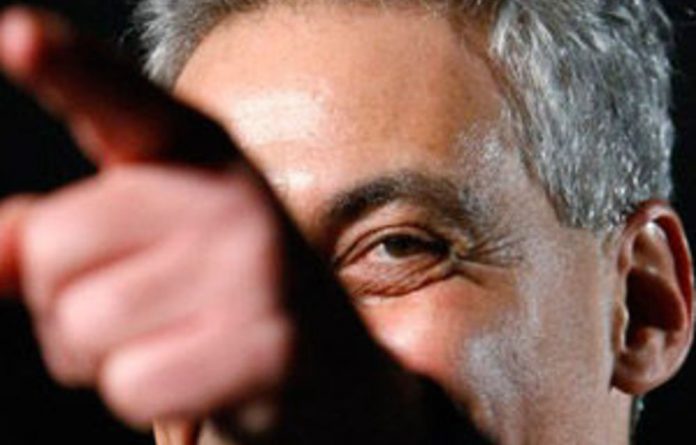 US President Barack Obama’s ex-enforcer Rahm Emanuel was crowned mayor of Chicago on Tuesday, picking up the mantle from retiring mayor Richard Daley who had ruled for 22 years.

“I want to extend my congratulations to Rahm Emanuel on a well-deserved victory tonight,” Obama said in a statement released minutes after Emanuel’s acceptance speech.

“As a Chicagoan and a friend, I couldn’t be prouder. Rahm will be a terrific mayor for all the people of Chicago.”

Emanuel, who will be the Windy City’s first Jewish mayor, pledged to work to overcome the “old divisions and old ways that have held Chicago back” when he takes control of the ethnically, racially and economically divided city.

“What makes this victory most gratifying is that it was built on votes from every corner of this city — from people who believe that a common set of challenges must be met with a common purpose,” Emanuel told supporters.

The famously foul-mouthed Emanuel was the clear front-runner in the race to run America’s third-largest city ever since he resigned as White House chief of staff and moved back to Chicago in October.

Emanuel handily captured the majority needed to avoid a runoff despite facing off against five other candidates, winning 55% of the vote with 97% of precincts reporting, the Chicago elections board reported.

The shrewd politico, whose uncompromising style earned him the nickname “Rahmbo,” is expected to replicate Daley’s iron-fisted tactics and focus on maintaining Chicago’s reputation as “the city that works”.

“What people want in their mayor is a larger than life figure who’s strong enough and tough enough to move this city forward and Rahm Emanuel has that,” said David Axelrod, who recently stepped down as a senior White House advisory to get working on Obama’s re-election campaign.

“He’s a guy who gets the job done,” Axelrod told NBC Chicago.

Emanuel paid tribute to Daley in his acceptance speech and vowed to continue his legacy of making Chicago a “world-class city”.

“Rich Daley is the only mayor a whole generation of Chicagoans have know,” Emanuel said.

“It’s an impossible act to follow. Yet we have to move forward.”

Emanuel pledged to work with city employees to overcome Chicago’s budget deficit and to draw parents and community members into the fight to improve schools and make the city’s streets safe.

“While the election was hard fought it was only the beginning,” Emanuel said.

“We cannot say we’ve won anything until a kid can go to school thinking of their studies and not their safety…. or until the parent of that child is thinking about their work and not where they’re going to find work.” – AFP