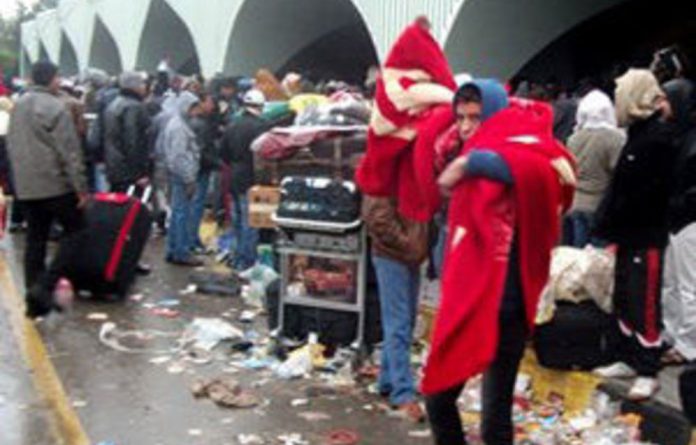 Britain urged the world to exert greater pressure on Libyan leader Moammar Gadaffi on Thursday and the European Union said it was considering sending a humanitarian intervention force to the country.

Italy’s foreign minister has said as many as 1 000 people may have been killed in the violence, as Gadaffi tries to quell the popular insurrection against his 41-year rule.

“I think it will be important for all of us internationally over the coming days to increase the pressure on a regime which by all accounts is now committing serious offences,” Hague told BBC Radio.

He said atrocities had taken place and the odds against Gadaffi’s political survival were increasing.

“We will be looking for ways to hold to account the people who are responsible for these things and they should bear that in mind before they order any more of them,” he said.

“We will want some kind of international investigation … We are finding a lot of support from other countries,” he said.

In Brussels, senior officials said the European Union was weighing a range of options to evacuate 5 000 to 6 000 EU citizens still in Libya, many of them oil company employees, and said one possibility was a military humanitarian intervention force.

“This … is one of the possibilities we are working on,” a senior EU official said. “We are in contact with EU member states to see whether their facilities, civilian and military, can be deployed for this purpose [evacuation of EU citizens].”

The United States is also looking to work more closely with the European Union on tackling the situation in Libya.

The EU official said it was now understood that the “major part” of Libya was under rebel control and preparations were being made for a movement of migrants.

He did not estimate how many people might flee Libya, saying only that developments were “happening very fast and in a totally unpredictable way”.

Crisis meeting
A high-level British government crisis committee, known as Cobra, was meeting to discuss the government’s response to the crisis, the Foreign Office said.

The government is trying to work out how to evacuate about 170 British oil workers from remote desert camps in Libya. Some have appealed for help after looters seized their vehicles and supplies.

Sky News quoted sources as saying the Special Boat Service, a special forces unit, was on standby for a possible rescue mission to Libya, but the government declined comment.

Delays and confusion in evacuating Britons from Libya have led to criticism of the government, prompting Hague to order a review of evacuation procedures.

The EU, which on Wednesday took the first steps towards drawing up sanctions on Libya, said it was working with the United Nations, Japan, the United States and others to ensure any form of assistance was coordinated.

“We have created a network of communication … daily information on the evacuation needs, availability of means of transport,” the senior official said.

“So far, we have no reports from the U.N. of a classical humanitarian emergency, I mean lack of food, water and medicine. They are preparing to receive [refugees] and we support their work. – Reuters