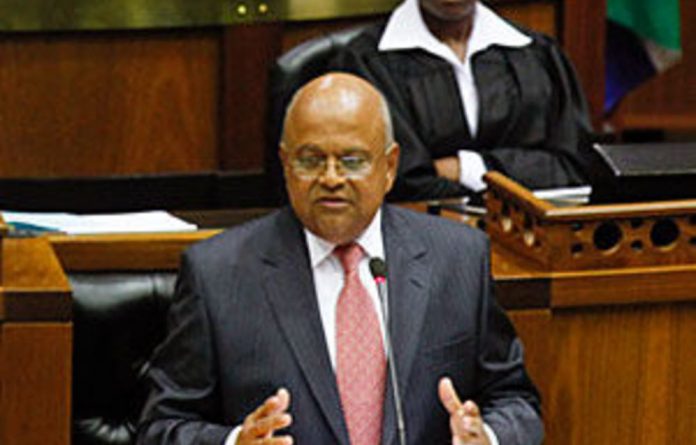 Finance Minister Pravin Gordhan appeared to please nearly everyone in his 2011/12 budget on Wednesday, with economists, estate agents, vehicle makers and even heavily taxed tobacco producers giving their approval.

Razia Khan, an economist for Standard Chartered Bank, said Gordhan had chosen job creation over fiscal discipline in the budget, but that South Africa had “earned” the space to do so.

“Meeting the seemingly conflicting objectives of job creation and fiscal consolidation was always going to be difficult, and South Africa has clearly opted to focus on the former,” Khan said. “With a relatively well-established reputation for fiscal management, South Africa has in a sense earned itself the fiscal space to do so.”

There had also been an expectation that measures would be announced to weaken the rand exchange rate.

“The headline takeaway here, with everyone expecting perhaps further measures to weaken the ZAR [rand], is that nothing new has been announced.”

Vehicle manufacturers welcomed the budget, but were concerned about the increase in ad valorem tax on cars bought for more than R900 000.

“The increase in the ad valorem tax on new motor vehicles with a purchase price above R900 000 came as a surprise and would affect about 1,5% of new cars sold, yielding an additional R150-million per annum to the fiscus,” the National Association of Automobile Manufacturers of South Africa (Naamsa) said.

‘Appropriate strategic response’
Gordhan announced that the general fuel levy would increase by 10 cents a litre of petrol and diesel from April 6 and the ad valorem excise tax on cars that cost more than R900 000 would increase by 5% to 25%.

However, Naamsa said the budget “represented an appropriate strategic response to the many challenges facing South Africa”.

“On balance, the budget was mildly expansionary and would support improved economic activity levels in the South African economy in the short to medium term,” Naamsa said.

“Our preliminary response is that we welcome this development,” Sactwu general secretary Andre Kriel said. “We will now investigate the announcement in more detail and will issue a fuller statement over the next few days.”

Trade union the United Association of South Africa was disappointed, with spokesperson Andre Venter anticipating a dark time ahead for ordinary workers amid looming increases in food prices and the already high oil price

Estate agents were gleeful about an increase in the transfer duty exemption for properties, from R500 000 to R600 000, and said this would make a “meaningful” difference to first-time buyers.

“The move is a surprise given that property prices have not really increased to the degree that would necessitate an inflationary increase in the threshold,” said Herschel Jawitz, the chief executive of Jawitz Properties.

Jan Davel, MD of the RealNet property group, said the announcement was the “most obvious good news” for the property industry.

‘Crucial step in the right direction’
Democratic Alliance finance spokesperson Dion George said the inclusion of a youth wage subsidy in the budget was the most effective solution to start creating jobs for the young and unemployed.

“The inclusion of this policy, and a R9-billion jobs fund, is a crucial step in the right direction towards the adoption of growth-oriented economic policies,” he said.

Mario Oriani-Ambrosini, of the Inkatha Freedom Party, said the budget showed national consensus on the country’s priorities. However it did not break away from a fiscal paradigm that could not work in the long run.

“South Africa is a welfare state which dreams of becoming a developmental state,” he said. “This is a legitimate dream, but the budget doesn’t yet concretise this into plan.”

“By maintaining a total tax incidence of 52% on cigarettes, the minister has acknowledged the importance of balancing tax collection with not unduly hiking pricing levels that stimulate illicit trade,” said BAT corporate and regulatory affairs director Fay Kajee.

Gordhan announced that smokers would have to cough up 80 cents more for a packet of cigarettes.

The hike would mean that the recommended retail price of BAT in South Africa’s biggest selling brand, Peter Stuyvesant, would increase by R1 from R24,50 to R25,50. — Sapa