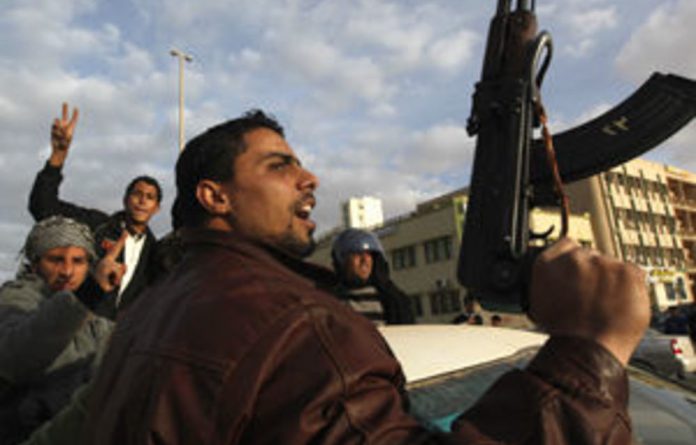 At the heart of the city where he launched his rise to power, Moammar Gadaffi’s indignity is now complete. In little more than three days of rampage the rebels in Libya’s second city have done their best to wind the clock back 42 years — to life before the dictator they loathe.

Benghazi has fallen and Gadaffi’s bid to cling on to power, whatever the cost, has crumbled with it. There is barely a trace of him now, except for obscene graffiti that mocks him on the dust-strewn walls where his portraits used to hang. Residents who would not have dared to approach the town’s main military base without an invitation were doing victory laps around it in their cars.

Every barrack block inside had been torched and looted. The stage where Gadaffi would address the masses on the rare occasions that he came here had collapsed. His house across the road had been ransacked and there wasn’t a loyalist soldier inside.

“He is gone. A dragon has been slain,” cried Ahmed al-Fatuuir outside the secret police headquarters. “Now he has to explain where all the bodies are.”

The Middle East’s longest ruling autocrat seems disinclined to do that, or to go quietly. His rambling speech on Tuesday night, in which he vowed to die in his homeland as a “martyr”, has convinced many in Benghazi that, although they may have ousted their foe from eastern Libya, they have not seen the last of the bloodshed.

At the city’s hospitals, administrators are still tallying the toll from the most savage fighting seen here in decades. At the al-Jala hospital, at least 65 deaths have been recorded since February 17, with dozens of injuries, many of them horrific. And they are still coming in.

A Libyan soldier, who with many of his colleagues had joined the anti-government insurgency, was pronounced dead as the Guardian arrived inside the overworked intensive care unit. A small bullet wound near his right kidney had caused irreversible chaos inside his body.

‘Lurking in the shadows’
“They are still out there,” said the doctor who pronounced him dead. “These mercenaries who are hired by Gadaffi are lurking in the shadows.” Wherever they are hiding, they must be running out of arms. All day yesterday, defecting troops and officers were lugging in thousands of kilograms of ammunition to a courtyard inside the secret police headquarters on Benghazi’s waterfront. By the day’s end an arsenal that could easily supply an army brigade was piled up.

There were plastic explosives, rockets, machine guns and even the anti-aircraft weapon that was used to mow down demonstrators as they assaulted the military base on Sunday.

Evidence of the carnage it caused was clear on the walls of nearby buildings and in the mortuaries. Doctors had used their mobile phones to capture the carnage that was caused by military weapons on human flesh. And they coolly displayed the aftermath of the battle, denouncing Gadaffi as a criminal as they did so.

Nearby Filipino orderlies were putting the finishing touches to the short life of a dead soldier, washing his body with a clinical calm and slowly readying a green body bag. It was a process they were clearly familiar with. “Too many times, too many times,” said one orderly as he rested on a trolley. “It has been terrible in here.”

At least 232 demonstrators in Benghazi are believed to have been killed since the uprising began and up to 1 000 injured. There are no reliable figures on the number of soldiers or mercenaries killed during the assault of the barracks, or in the hours of chaos that followed.

One thing that is clear is that this was not a peaceful stroll through the streets of Bahrain, as has largely been the case on the other side of the Arabian peninsular. This was a savage rampage on both sides, a blood-and-guts revolution, fuelled by decades of repression, neglect and rage. There has been nothing peaceful about it.

Storming through
Testimony to the protesters’ vehemence is dotted all around the base, in the form of bulldozers stolen from nearby worksites that were used to breach the walls. At least six of them stand burnt and mangled near where their work had been successfully done — gaping holes in whitewashed walls that allowed protesters to storm through.

“That is where the anti-aircraft gun was and that is where all the African mercenaries were found dead,” said Mohamed Fatah, who was part of the throng that attacked the base. “The people were leading a funeral march past the big roundabout and people from inside the base opened fire,” he said. “They went home, gathered themselves and came back. This is what happened.”

Gadaffi’s reported use of mercenaries appears to have tipped the hand of many protesters and armed forces. “That is why we turned against the government,” said air force Major Rajib Feytouni. “That and the fact that there was an order to use planes to attack the people.” Workers at an oil refinery 190km west of Benghazi said on Wednesday that they had seen an air force jet crash nearby and two parachutes land.

There were widespread reports that those on board had refused to carry out an order to attack the east of the country but they could not be independently verified. But Feytouni confirmed that an air force base to the east had been hit on Sunday by two bombs that were dropped from a jet. “They were trying to make sure that the weapons did not end up in the hands of the opposition,” he said.

He added that he had personally witnessed 4 000 to 5 000 mercenaries flown into his air force base on Libyan military transport planes, beginning on about February 14, several days before the uprising started.

“They [the planes] had 300 men at a time, all of them coming out with weapons,” he said. “They were all from Africa — Ghanaians, Kenyans.” Several of them are being held in a jail at the top of the ransacked courthouse on Benghazi’s corniche. One was briefly brought to meet the Guardian. He was quickly ushered away by lawyers who said he was not allowed to speak until the case against him was finished.

But the court of public opinion on the heaving street below had already convicted the unnamed African, along with anyone else linked to what they believe are the dying days of 42 years of sadistic oppression. There was no sign of any pro-regime figures. And even those who have recently defected, such as the country’s justice minister, are not prepared to show their faces publicly, fearing the reactions from a combustible street.

‘Freedom for Libya’
The mood of people fluctuated easily between nervousness and violence, warmth and zeal. The first Western reporters seen in the city since law and order collapsed were embraced almost as liberators. At some points during the morning and at the hospital, it was difficult to move without people eagerly thrusting in our faces more macabre images of dead people or missing relatives.

“His time will come,” said one man brandishing a simple sign that said in English, “Freedom for Libya”. He added: “You are welcome here. The world needs to see what is happening.” Along the long and winding way from the Salum crossing from Egypt, there was not an official to be seen.

Neighbourhood Watch-like groups, all armed with AK-47s, manned checkpoints in and out of all the towns. But every military and police post for 570km had been abandoned. The scattering of the police was leading to claims of victory and the feeling of triumphalism among many of the city’s young people.

The deathly emptiness of a rainy morning in a city under siege had by dusk given way to teaming streets and jubilant cheers. Celebratory bursts from AK-47s cracked into the air — always a disconcerting sound in a war zone — throughout the afternoon.

The jubilation did little to hide Benghazi’s wounds, though. Here, more than in the capital, Tripoli, or in Gadaffi’s other strongholds, mainly in the west, society remains brutalised and stagnant, a drab, decaying old-order feel, much like Iraq in 2004.

“Here hospitals are nothing like in Tripoli,” said an intensive care nurse who identified herself as Fatima. “It is First World there, but we have to make do.” It’s the same with government buildings — what remains of them. There is barely a typewriter left, let alone a computer or the basic tools of administration.

Neglect had been a clear strategy for Gadaffi for a city that had in 1969 deeply resented the coup he launched against the monarch, King Idris, and has not forgiven him since. The pre-1969 flag last flown 42 years ago has become a prominent symbol of this revolution. It flies above key government buildings and even hospitals and it is worn as a badge by most organisers.

Benghazi feels Libya’s time has come. Residents are adamant that the leader who forgot them has days, or perhaps weeks, left as president. “He can’t survive and he won’t survive,” one man shouted outside the courthouse. “He is deluded and he is cruel. He will attack us again even though everyone knows he is finished.”

The city has little sense of what is happening in the west of the country where Gadaffi still appears to be in control of at least large parts of the capital. Meanwhile, many of the 1,5-million foreigners still in Libya are scrambling for the border, or waiting for help from their governments.

Several passenger ferries are waiting in the choppy waters off the coast of Benghazi for an evacuation order. And the Salum border crossing to Egypt is a chaotic scramble of fleeing Egyptians who overran the arrival hall on Tuesday evening as the Guardian was trying to enter Libya. Riot police were moved into position but weren’t used.

The international community again appears hamstrung by the man it had spent decades trying to rehabilitate. Leverage is limited and options are few. “The people of the international community had been helping their governments to help the assassin,” said an orthopaedic surgeon, Dr Shakir, in al-Jala hospital. “And that’s only because the assassin and his government is helping them. That is a flawed logic.”

So far reactions to the gathering storm here, which may soon lead to the overthrow of the third Arab autocrat in less than three months, has been to renounce the volatile leader and the compulsive savagery he is launching as his legacy melts away.

But there remains a gnawing fear that the worst may be yet to come. “Of course it is true,” Saad Achmed, a 24-year-old student, said. “If he feels he is cornered he will come for us. Those roads you came in on may be clear, but you did not see who is hiding over the hills. We have won the big battle, but that does not mean the war is won just yet.” – Guardian News & Media 2011

Isis strives to hasten the apocalypse