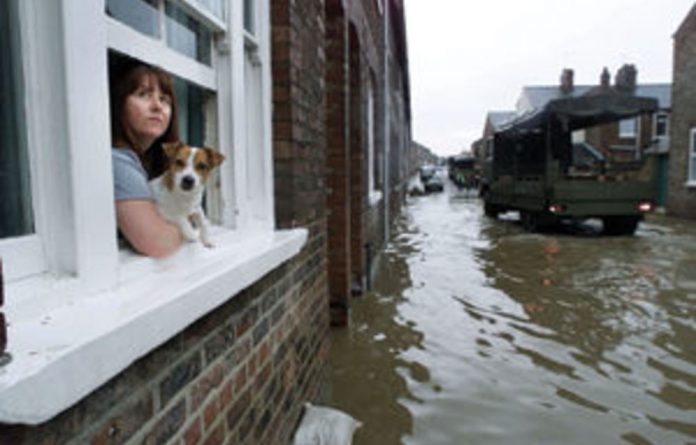 For the first time scientists have quantified the role of human-induced climate change in raising the risk of floods, a major breakthrough in climate science.

Researchers have found that global warming made the floods that devastated England and Wales in the autumn of 2000, costing £3.5-billion, between two and three times more likely.

“It shows climate change is acting here and now to load the dice towards more extreme weather,” said Myles Allen of Oxford University, who led the work, which he started after his own home was nearly flooded in 2000.

It will also have wider consequences, say experts, by making lawsuits seeking compensation against energy companies brought by people affected by climate change more likely to succeed. It may have billion-dollar consequences by determining which countries benefit from the future $100-billion-a-year United Nations adaptation fund, which aims to build resilience to the impacts of climate change.

“This is groundbreaking work,” said Professor Bob Watson, chief scientific adviser to the department for environment for England and Wales, and former chairperson of the Intergovernmental Panel on Climate Change. Until now, he said, scientists could state that global warming was expected to cause more extreme weather, but not that it was to blame for any specific event.

Chris Huhne, the United Kingdom’s secretary of state for energy and climate change, said: “The evidence for human influence on climate is now even more compelling. Climate change is not a distant threat. It is a clear and present danger — and one that we can do something about.”

The work made lawsuits against major polluters more likely, said lawyer Richard Lord, an expert on climate litigation in London. “Showing that the chance of an event occurring has increased by, say, 100% or 200% gives you a much better chance of showing causation. It gets you around one of the legal obstacles.”

Lord said he could foresee such cases, which were already being attempted in the United States, succeeding in the medium term if international negotiations failed to control emissions and the damage caused by climate impacts continued to increase. Between September and November 2000 more than 500mm of rain fell in the UK during the wettest autumn since records began in 1766.

More than 10 000 homes were flooded, resulting in £3.5-billion of insurance claims. After Allen’s home was nearly flooded, his colleague, Pardeep Pall, suggested using modelling to determine the role of global warming, but the amount of computing time required was formidable. To overcome this obstacle, Allen used his Climateprediction. net project, through which members of the public have donated more than one billion hours of PC time to running models.

The team ran models simulating the real weather and, crucially models of the region’s weather as it might have been in a world without human-produced greenhouse gases. The models were run thousands of times to enable the probability of the extreme floods to be determined in both scenarios, taking 40 000 years of computing time.

Global warming was found to have most likely doubled the risk of the 2000 floods, but there is a one in 10 chance that the increased risk was as high as 700% or as low as 20%. Apart from litigation, the broader implications of being able to link climate change to specific weather events include determining which natural disasters have been heavily influenced by warming and which have not, and which should receive international adaptation funds as a result.

Another study, published in the journal Nature, shows for the first time that the increase in extreme rain, snow and hail predicted as a consequence of global warming is real. The researchers, led by Professor Francis Zwiers at the University of Victoria, Canada, found increases in intense rainstorms over land in the northern hemisphere, as measured by rain gauges, mirrored the projections from climate models and could not be explained by natural climate variability.

In fact, the models appear to underestimate the increase. “The models may be giving us an overly rosy scenario,” said Professor Rowan Sutton, a climate scientist at the University of Reading, England, who was not involved in the research.

The increase in extreme precipitation has a firm foundation in basic physics as a warmer atmosphere can hold more water. Overall, Sutton said, the studies of extreme rain and flooding emphasised the tangible impact of climate change.

“It is not just affecting global average temperatures, it is affecting aspects of climate that really matter to people — and to societies and economies — in serious ways.” —

Poison ban is good for bees

Melting ice is Earth’s warning signal, and we cannot ignore it

Industrial giants cash in on carbon