Gorbachev tells Putin not to run for president 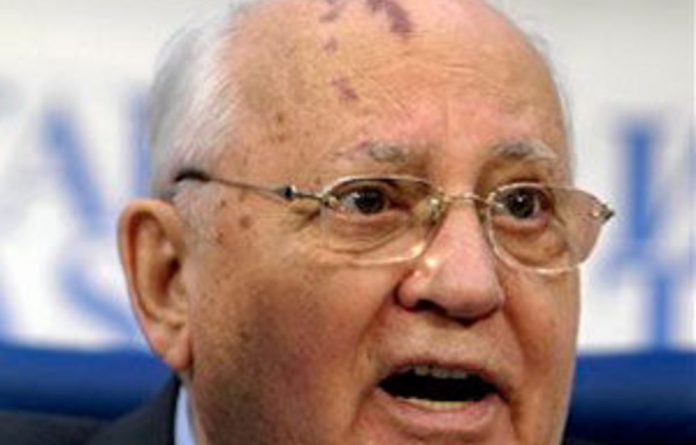 Former Soviet leader Mikhail Gorbachev marked his 80th birthday on Wednesday by advising Vladimir Putin against running for president and warning about the dangers of Arab-style social revolt.

The man whose perestroika and glasnost reforms altered the course of history by burying the Soviet Union and liberating Eastern Europe received a rare spotlight from the Russian media that he otherwise only enjoys abroad.

The 1990 Nobel Peace Prize winner used the unprecedented attention to issue some of his strongest criticism to date of a system in which the Kremlin controls increasingly broader aspects of public life.

Gorbachev said that Russia must “definitely” draw lessons from the social revolutions now rattling North Africa and the Middle East.

“How many times have they promised people that they will be loosening the screws,” Gorbachev asked in reference to the Russian authorities.

He said the “vertical of power” that the Kremlin has built to oversee the country’s politics and economics “has rotted to its core” and issued a direct challenge to the country’s de-facto leader, Putin, to step aside.

“Vladimir Vladimirovich has already served two terms [as president] and another as prime minister. If I were him, I would not run for president,” Gorbachev told the Argumenty i Fakty weekly.

‘Shameful’
Putin and his presidential successor, Dmitry Medvedev, have said on repeated occasions that they will decide in private which of them will run — and almost certainly win — in selections scheduled one year from now.

Gorbachev has previously called such a private selection process “shameful” and accused the pair of acting “as if society, Constitution, elections, did not exist”.

Russia’s state-controlled media has spent the week devoting remarkable attention to Gorbachev, despite polls showing that he remains more marginalised in society today than at any time in the past.

But none of the broadcasts painted him as the man who helped alter the course of history by ending the Cold War without armed conflict and permitting Russians to enjoy their first taste of press freedom.

Channel One television titled its broadcast “Mikhail Gorbachev. He came to give us freedom”, while the government’s Rossiyskaya Gazeta included an interview from a close ally who defended the Soviet leader’s role.

“Gorbachev was certain that by limiting freedom you cannot attain justice, and that without justice there is no freedom,” a close Gorbachev ally and current Russian Academy of Sciences member, Ruslan Grinberg, told the paper.

Remarkable
The attention seems remarkable considering the increasing domestic isolation Gorbachev has found himself in since failing to revive his career in the mid-1990s.

An opinion poll released this week showed that Gorbachev “irritates” fewer Russians today than he did a decade ago.

Only 5% of respondents said they found him “revolting” — an alternative answer that itself underscored what the pollsters expected to find in their study.

But the number of people who said they felt indifferent to Gorbachev rose from 35% in 2001 to 47% today.

The main festivities will quite symbolically happen in London on March 30 when the Royal Albert Hall will be reserved for a gala concert in his honour attended by the likes of actress Sharon Stone and singer Bryan Ferry. — AFP