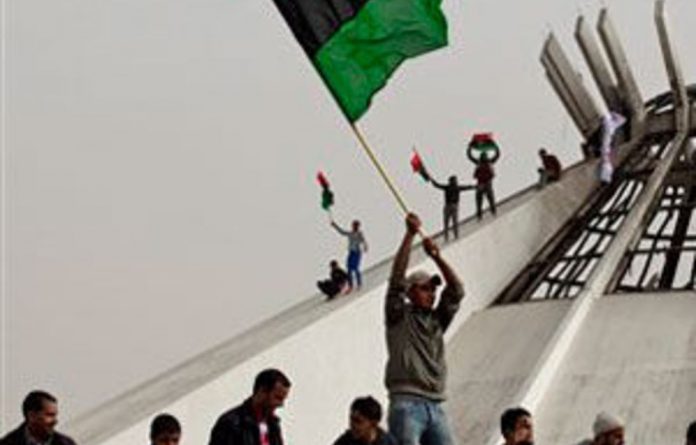 Muammar Gaddafi has warned “thousands” would die if the West launched a military intervention in Libya as rebels repulsed a fierce onslaught by his forces around a key eastern oil town.

As the world clamoured for action to stop Gaddafi using warplanes against his own people and to protect refugees scrambling to escape, the United States and its allies cooled talk of imposing a no-fly zone over his country.

United States Secretary of State Hillary Clinton said any such decision was a “long way” off, and Nato officials remained divided.

Clinton also warned that any intervention would be “controversial” in the Arab world and that the Libyan opposition wanted to be seen to be dislodging Gaddafi’s forces on their own.

The patchwork Libyan opposition controls swathes of eastern and western Libya, including the key eastern city of Benghazi and some oil installations. Gaddafi remains firmly in control of the capital, Tripoli.

With a humanitarian crisis worsening on Libya’s western border with Tunisia, Britain said it was sending planes to airlift thousands of Egyptians stuck in refugee camps, while France said it was sending a helicopter carrier to waters off Libya to help evacuate civilians.

Impassioned speech
Speaking live on state television on Wednesday, Gaddafi warned that the “battle will be very, very long” if there is any intervention by foreign powers.

“If the Americans or the West want to enter Libya they must know it will be hell and a bloodbath — worse than Iraq.”

In an impassioned speech, he again blamed al-Qaeda for the challenge to his 41-year iron-fisted rule, saying the objective was to control Libya’s land and oil.

Calls for a no-fly zone have come in response to media accounts that Gaddafi’s forces have used planes and helicopter gunships to fire on civilians.

The Arab League said after a meeting of foreign ministers in Cairo that “the Arab countries cannot remain with their arms folded when the blood of the brotherly Libyan people is being shed”.

One of the issues it said it will consider is “the imposition of an aerial exclusion zone” in cooperation with the African Union.

Such a stance may win support from France, a strong supporter with Britain of a no-fly zone, albeit only with approval from the United Nations.

Muslim-majority Turkey has already said any Nato involvement would be “unthinkable”.

First assault
Libyan fighter jets launched air strikes on the rebel-held town of Brega and its oil installations as Gaddafi on Wednesday launched his first assault on opposition positions since a popular uprising began in the east 17 days ago.

Despite pounding rebels with heavy weaponry and tanks, Gaddafi’s forces were driven back by reinforcements trucked in from Benghazi, the main city under opposition control.

A huge blast rocked the coastal town and plumes of smoke billowed into the sky, an Agence France-Presse (AFP) reporter said, as clashes continued hours after the opposition said it had repelled one of the biggest pro-Gaddafi counter-offensives yet.

As fighting raged, an AFP reporter at one of the two hospitals in Brega, 200km south-west of Benghazi, saw the bloodied bodies of four young men in a morgue, while rebels said at least 10 people had died.

Libyan warplanes also launched airstrikes on Ajdabiya, 40km from Brega, targeting either an arms dump or a military base taken over by opposition forces, they said.

“My colleagues on the ground say that acres of people, as far as you can see, are waiting to cross,” she said.

“They are outdoors in the freezing cold, under the rain, many of them have spent three or four nights outside already,” she said, appealing for “tens if not hundreds of planes” to help end the gridlock.

More than 100 000 people have already left Libya to escape a vicious crackdown by Gaddafi loyalists, which has left at least 1 000 dead, according to conservative UN estimates.

The conflict in Libya, responsible for about 2,3% of global crude oil output before the crisis, and the uncertainty around the Middle East has sent oil prices soaring over $100 per barrel in recent days.

Anger at authoritarian Arab regimes in the Middle East and North Africa continued to rage from Algeria to Yemen and has spread to the previously unaffected Gulf states of Kuwait and Oman, unnerving financial markets.

Hundreds of Omanis demonstrated on Wednesday in support of Sultan Qaboos as more than 400 activists camped outside the Gulf state’s consultative council, in a counter-demonstration protesting corruption. — AFP