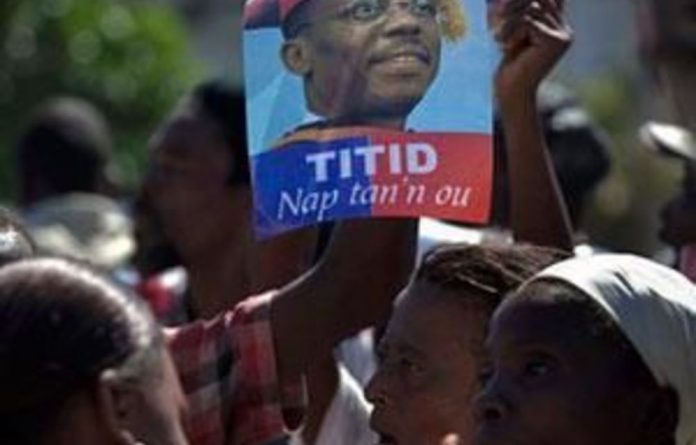 A candidate in Haiti’s decisive presidential run-off said on Thursday she hoped popular former president Jean-Bertrand Aristide would delay his planned return to the country until after the election later this month.

“Personally, as a citizen, I would prefer that he comes back after the elections,” former first lady Mirlande Manigat said in a news conference at Miami’s International Airport.

“We are waiting for elections and the situation has been particularly agitated,” she added.

Manigat (70) faces musician Michel “Sweet Mickey” Martelly in the March 20 run-off. She emerged as a front-runner in the November 28 election in the volatile, earthquake-ravaged Caribbean country. The poll was widely criticised as chaotic and fraudulent.

The election also drew controversy over the fact that Aristide’s Fanmi Lavalas political party was barred from running a candidate in the poll.

The run-off comes against the backdrop of Aristide’s recent announcement that he is planning to return home, ending his prolonged exile in South Africa. He has kept everyone guessing about the timing.

“I think what we need now is more peace,” Manigat said, The return of Aristide, a fire-brand left-wing populist, only threatened more “agitation” ahead of the election, she said.

Manigat did not elaborate on her comments suggesting possible unrest. But Aristide, a charismatic former Catholic priest, is loved by many of Haiti’s poor and loathed by business leaders and the wealthy elite.

He became Haiti’s first freely elected president in 1991 but spent much of his first five-year term in exile after a military coup. Elected again in 2000, his second term was soured by economic instability and gang and drug-related violence. He was finally ousted in a 2004 rebellion led by former soldiers. Aristide says Washington orchestrated it.

Haiti’s outgoing government, under intense international pressure to keep shaky United Nations-backed elections on track, has said it cannot keep a citizen from returning and has issued a diplomatic passport for Aristide.

But the possibility that he could return before the March run-off has led the United States, the United Nations and other major western donors to signal they would view such a move as, at best, unhelpful, and at worst, potentially dangerous. – Reuters