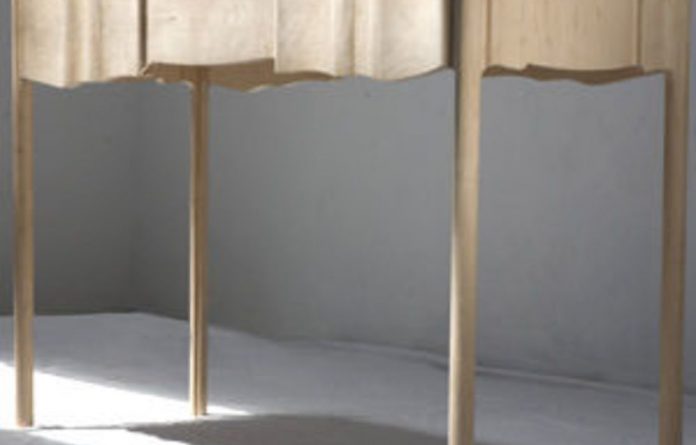 ‘I’m very process driven,” says architect and designer Richard Stretton, of Durban firm Koop Design. ‘I seldom have a clear idea when I start. It’s a good way of removing ego from the design process. There are five things that influence the outcome of an object — design, geographical context, social context, materiality and available manufacturing processes. If you make yourself personally important in that, you mess with the balance.

‘I don’t use computers to draw. I design by hand. Then my office models it up and I draw over it by hand again. For me, it’s a very tactile experience. I need the friction in my pen to make a mark.

‘The linenfold table was made for the Joburg Art Fair, so it didn’t come with a traditional ‘client’. It allowed me to explore. On an aesthetic level, I was interested in traditional furniture design that used linenfold in the scrolled shapes on the fascia of tables, of antique furniture. I wanted to pursue that, make it slightly more contemporary. I’d been wanting to make a wooden bed where the sides were carved to look like a night frill made out of timber. I wanted to use the wood grain to imitate the fall of linen. With the table, I wanted to make a table with a timber tablecloth.

“Halfway through, I realised people would still need to get their legs under the table and so the design changed. It became a sideboard — with an elongated height and length, a different profile. It added to the elegance of the design.

‘I’m very traditional — I use traditional components. This was more modern. All the timber was ­robotically formed. But it was all hand-assembled.

‘We used maple because it’s so hard. This is a very engineered piece of furniture. I also liked the subtle grain of the wood. By scooping it out, along the ‘folds’ the grain became more pronounced. This surprised me during the production process; it wasn’t something I’d anticipated.

‘This table is all about imperfect symmetry and proportion. Like a Paul Smith stripe. How does he make them look so nice? It’s the relationship of wide to narrow. A massive reduction of elements. Even bar codes can be beautiful. One method does not deny another. You have to have a good eye.”