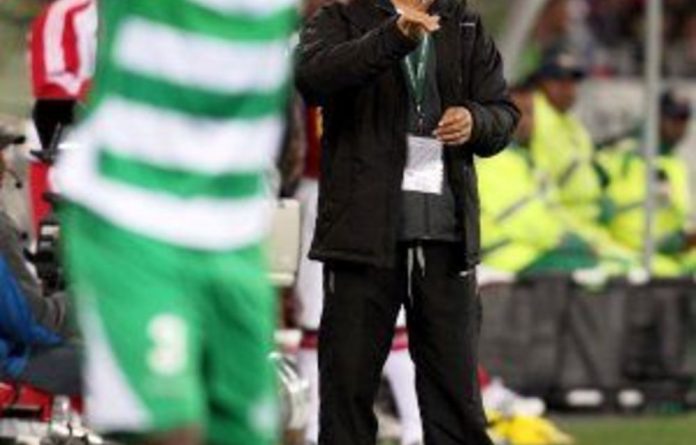 By local standards, Bloemfontein Celtic coach Clinton Larsen is considered a rookie. He is an out and out greenhorn when it comes to coaching. And as his team prepares for Sunday’s showdown against log leaders Orlando Pirates at the Seisa Ramabodu Stadium in Mangaung, he admits that he is, indeed, still learning the ropes.

The match is the pick of the weekend fixtures, with Pirates facing probably the most serious threat to their title ambitions against a Celtic side that has blossomed under the tutelage of Larsen, who has led them on an impressive unbeaten run at their Mangaung stronghold.

“I expect a really tight game on Sunday,” said Larsen. “But we have established a proud, unbeaten record at Seisa Ramabodu and we aim to prevent Pirates from achieving what Kaizer Chiefs and Ajax Cape Town have failed to do. We will not allow them to come here and do as they please.

“Agreed, they beat us in the first round, but we had not yet gelled as a team. A lot of water has passed under the bridge since then and I would like to believe that we are a lot stronger now. I honestly fancy our chances,” he said, without a hint of arrogance.

That is Larsen, a simple, down-to-earth manager who is leading a quiet revolution down Bloemfontein way. Appointed as head coach in April 2010 after serving as a deputy to Owen da Gama since July 2009, Larsen has taken to his responsibilities like a duck to water.

He displays the same simplicity and hard work that he showed in his professional soccer career. There is no fancy stuff, no showboating, unless it will benefit the whole team. And, in spite of a lack of big-name players, the green and whites have been drilled into a fearsome machine.
After a brilliant amateur career with Crusaders Larsen was recruited by Manning Rangers in 1992 and stayed with the Maulers until 1999. That was when Pirates came calling, and he wore their black and white jersey until 2001. There he won a league and cup double under the guidance of Gordon Igesund.

‘We are on course’
He returned to his first love, Manning Rangers, and served them until he retired in 2003. In between, Larsen won the inaugural Premiership championship in 1996 and, importantly, won two international caps for Bafana Bafana. Some people believe that had it not been for his quiet demeanour he would have won more international caps.

Although an unassuming figure off the field, he stood like a colossus in the middle of the park during his playing days, dictating the flow of the game in spite of his short frame. Larsen has never been a flashy player and went about his duties diligently, without any fuss. That explains why he never hogged the headlines.

“We ended the season on sixth with 42 points after 30 games last year,” says Larsen. “This year, we want to finish higher. Already, we have attained 39 points after 23 games and this objective seems achievable. I think we are on course, but it will require a lot of hard work.”
Though loath to single out individual players for special praise, Larsen admitted that several players had raised their hands to be counted this year and had inspired those around them to put their shoulders to the wheel, which created the obvious results.

“We engaged in a rebuilding process last year. Though Owen da Gama left and we brought in many players, the objective remained the same. The only difference has been that some of the players we brought in did not have enough game time at their previous clubs and, as a result, we struggled to gel as a team. But, I guess, adding a couple of youngsters to the squad had the desired effect. It changed the way we approached the game. Danny Venter brought pace and skill down the wing and so did Thokozani Mshengu, while there is fire under the belly of veteran Moses Spandeel.

“Lennox Bacela arrived here without much game time from Santos. Dino Ndlovu did not have enough game time at both Mamelodi Sundowns and Platinum Stars, while Siphelele Mthembu and Bennett Chenene also struggled with match fitness when they arrived. Hlompho Kekana had not kicked a ball in more than a year.

“But the revelation of this team has been Mulomowandau Mathoho. He played two games last year but this season has been ever present in the heart of our defence. Watching him marshal our defence and the confidence he displays, it is hard to believe that he is only 20 years old.”

‘We are getting there’
Larsen has introduced a work ethic at Celtic that has resulted in Siwelele turning into a difficult team to beat away while they remain unbeaten at home. And, for his innovation and hard work, he was rewarded with the “coach of the month” trophy in October and November — not bad for a rookie.

“We are not scoring consistently enough,” said Larsen. “We create a dozen opportunities but fail to convert. If we can convert only a fraction of the chances we create, I believe we would be even higher up the league table than we are.”

Following their 5-0 whitewash of defending champions SuperSport United and a crucial 1-0 victory over Santos in windy Cape Town during mid-week Pirates should brace themselves for a really tricky Sunday afternoon.

“It has taken us time to get into rhythm,” said Larsen. “We knew when the season started that it was not going to be plain sailing. But we are getting there.

“The team is growing in strength and confidence. We are a lot stronger now than we were when Pirates beat us in the first round and I feel confident that this is going to be a much tighter match.”

Sunday marks a moment of truth for 40-year-old Larsen, pitted against Rudi Krol, the 62-year-old veteran of veterans, who captained his native Netherlands at the 1974 World Cup in Germany three years after the Celtic manager was born. This game will give us an indication of how far he has come since taking over in Mangaung.