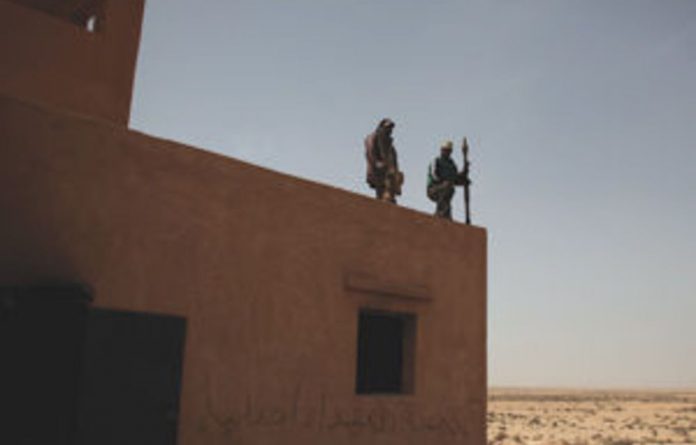 On a sand-blown horizon to the left of what makes for a rebel frontline stand 12 large and dilapidated hangars that will probably prove pivotal to where Libya’s revolution goes from here.

Inside each of them is an enormous array of weaponry, stacked from floor to ceiling, which the haggard band of rebels gathering nearby say they will soon take on the long march to the Libyan capital, Tripoli.

Just less than two weeks ago this giant arsenal on the outskirts of Ajdabiya, 160km south of Benghazi, was one of the Libyan army’s biggest weapons dumps in the east of the country, a collection of arms so vast it was considered crucial to the country’s eastern defences.

The dusty wooden boxes, containing rockets, mortars, artillery shells and howitzers, had clearly been assembled over a long period. Some seemed to date back to the late ’80s, a time when Colonel Muammar Gaddafi last had Europe and the United States threatening military measures against his regime. Now they could be used against him, something he is trying hard to prevent.

On Monday two jets that had flown from the west aimed bombs towards the area, as skittish revolutionaries watched from the nearby highway. Curiously, the bombs missed the base completely, not an easy thing to do. The rebels believe the pilots deliberately aimed their bombs short.

“Yes, it’s true that they didn’t want to damage these weapons,” said a young private who showed us through the base. He was less certain about an attack a day earlier, which had left a large crater near one of the hangars. “We’re not sure what caused this,” he said. “Maybe it was a rocket.” With the rush of euphoria about Gaddafi’s defeat in the east now subsiding, the rebels are facing a series of difficult choices.

Where loyalist roam
“We are still hoping that Tripoli falls by itself,” said Captain Faris Zwei at a smaller base further north towards Ajdabiya. “But if it doesn’t, we will go there.” For now, Zwei and the haggard band of men he commands are preparing for a shorter journey, a 200km push south then west towards the oil town of Ras Lanuf, where Gaddafi loyalists roam. This appears to be the main frontline, a drab town on the coastal road that was in rebel hands until Sunday.

“We will move there within two days if we have to,” said Zwei. “Gaddafi’s forces are there, but they are mainly restricted to their bases. There are pockets of resistance from Ras Lanuf onwards.”

Gaddafi’s rearguard action now appears to be in place. It is not proceeding with the dramatic speed of the retreat of his forces on February 20. Instead, the airforce and ground troops appear to be testing boundaries and the resolve of the rebels, many of whom expected the west of the country to capitulate as quickly as the east.

In Ajdabiya rebel leaders claim to have 10 000 men they can call on. Further along the highway, in Benghazi, there are tens of thousands more. Most are former members of the regular army, who now find themselves at the vanguard of expectation. Yet more are bands of eager youth and tribal figures with limited military training at best.

The rebel military leadership in Benghazi knows that disciplining such a disparate group will be essential in any assault. And so, too, will be keeping Gaddafi’s jets out of the sky.

Discussion about a possible North Atlantic Treaty Organisation-led move to enforce a no-fly zone over Libya was eagerly monitored all over the east of the country on Tuesday. “The pilots won’t bomb us anyway,” said Zwei, hopefully. However, the spectre of jet bombers still looms large. Benghazi locals have taken to choosing the nationality of an intervention force that many here increasingly view as necessary.

“There is a lot of talk about the Turks,” said one local. “They would be acceptable to all of us. Turkey is a Muslim country and they have good relations with us. But if the Americans came, the people would fight them in the streets, just like in Iraq.”

There were no jets flying over eastern skies on Tuesday and no clashes in any of the region’s contested areas. But rebel leaders continue to insist that the Sabha air base in southern Libya is being used to mass a mercenary army that Gaddafi could use in a full-blown assault on Benghazi.

“He is playing a game of attrition with everybody,” said Colonel Hamid Belkhair. “He is waiting till everybody turns away, and then he will strike. In the meantime, he is trying to build his forces’ confidence. It is becoming a battle of will.” – Guardian News & Media 2011